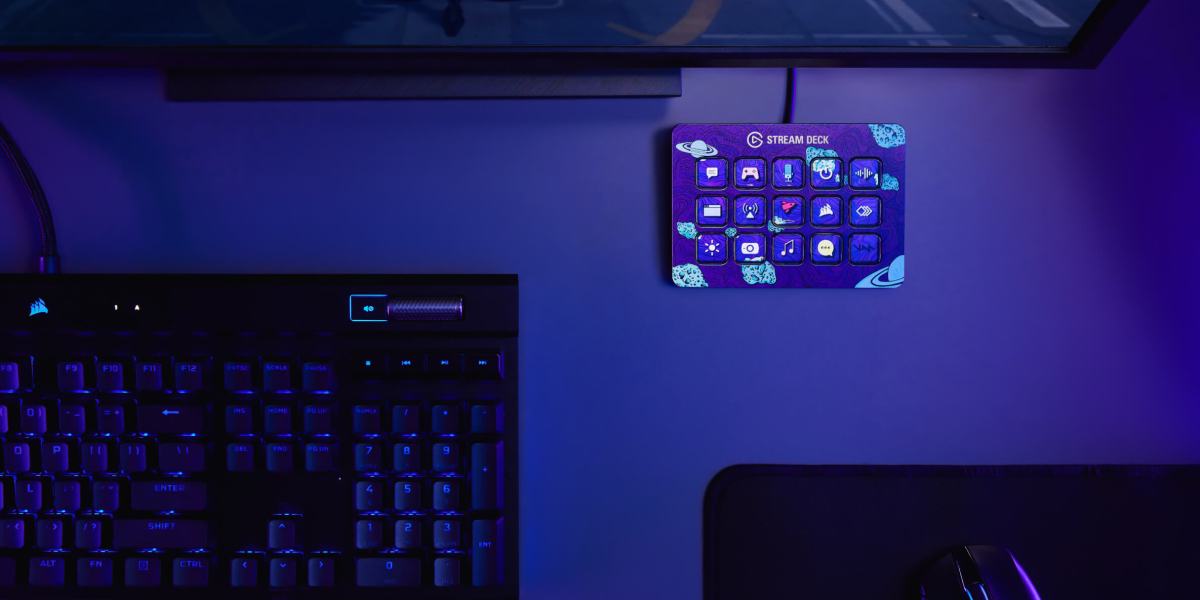 The Elgato Stream Deck has been at the forefront of streaming hardware since its original launch back in 2017. After four years and a few iterations, the original model has received a refreshed look with the Elgato Stream Deck MK.2. While the overall functionality remains the same, there are some added improvements that Elgato hopes will convince users to make the $149.99 purchase.

While the original Stream Deck features an adjustable-angle stand, the MK.2 version comes with a 45-degree fixed angle stand that feels a lot more durable. I used to feel like I was always going to break the old stand, but that’s gone with the new, thicker option. Also new with the MK.2 is a USB-C port with a detachable USB-C cable. Unfortunately though, it’s still just a USB 2.0 device, with slower speeds.

On the aesthetics side, the Stream Deck MK.2 allows for swappable faceplates to really give your setup a more custom feel. It’s a cute offering, but not something I’ll ever take advantage of because I enjoy the sleek black look. Lastly, it is slightly smaller and lighter than the original, weighing 5.1 ounces compared to the 6.4 ounces of the first Stream Deck.

A lot of the same

Like its predecessor, the Stream Deck MK.2 features 15 LCD buttons that you can configure to do just about anything you’d like. Whether you want it for streamer commands, added productivity functionality, or even added hot keys for gaming, there’s really nothing the Stream Deck MK.2 doesn’t offer you.

Personally, I’ve used my Stream Deck MK.2 for things ranging from blackbox control in iRacing to even shortcuts when programming in Microsoft Visual Studio. If you tinker enough with all the features, there’s more than meets the eye from just looking at it.

As far as the software is concerned, all versions of the Stream Deck utilize the same Stream Deck application. In it, you can set your custom layouts, key designs, and functionality.

Built-in integrations include software, and websites like OBS, Elgato Game Capture, Twitch and Twitter, while other options are available for download like Spotify or Voicemod. Aside from what’s built-in, there’s a marketplace with third-party integrations that you can add right to the software. The web-based icon creator then allows you to create your own button designs simply, and quickly.

One nice thing that’s been added on the software side is Zoom integration. With so many people moving to remote working over the last 18 months, it’s nice to be able to quickly set up controls on the Stream Deck MK.2 to mute and unmute yourself, as well as turn your camera on and off.

The one gripe I have is the lack of native plugins for software like Adobe Creative Suite. Of course, you can manually go in and create all the hotkeys you’d like, but when competing products from Loupedeck come with native support, it’s a bit of a disappointment. That said, it’s clear that the target audience for the Stream Deck is content creation. Using it for anything more is just an added bonus.

Should you upgrade your Stream Deck?

The Stream Deck MK.2 is in a very unusual position. At the end of the day, it functions exactly the same as all the other versions of the peripheral. There’s no added software benefits, plugins, or even button quality.

If you’re already using a Stream Deck, upgrading is unnecessary unless you desperately want the detachable USB-C cable or the ability to swap out face plates. If those don’t tickle your fancy enough, you’re going to want to stick with what you have. For those that don’t have anything at all, the Stream Deck MK.2 is a great mid-level option that can help you with way more than just streaming functionality. There’s so many customization options that it’ll make daily PC use an easier experience, no matter what you want to do.

The Stream Deck MK.2 is still a nice piece of hardware. But, for a new iteration of the original, more should've been done to really make it worth upgrading.