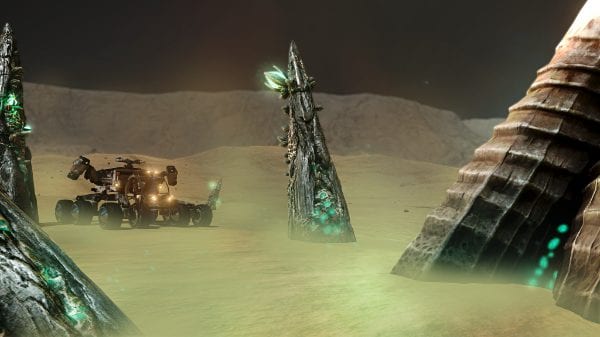 In the latest newsletter for Elite: Dangerous (#107), Frontier have outlined plans to give contacts and NPCs some specific individuality. This is scheduled to be part of a future 2.1 version update for the game.

With the release of Horizons, there are now two “seasons” of Elite: Dangerous, and while not everything in 2.1 will transfer to those without Horizons, the newsletter does say “as with the 2.0x point releases some of the changes will be applicable to season one owners”.

Frontier’s long-term plan is to use the Commander Creator to give certain in-game contacts proper portrait head-shots. “The intention is that every mission giver in game (and something similar for the minor factions) will be a specific individual”, the developers say. Those personalities will be consistent for all players, so Bob Missiongiver should show up in the same place for everybody.

The better your relationship with a minor faction, it is said, the higher the authority of the character you’ll be dealing with. Faction contacts will also “offer more information about how the minor faction is doing and how you can help them”. It’s mentioned that there will be “a number of changes to missions” to accommodate this (with specific details to come in later weeks).

Engineers (the Horizon guys who facilitate crafting) will get a similar personality injection in 2.1. Looting and crafting in general will get “developed to a much greater degree in 2.1” too.

Finally, Frontier will be taking a look at the visual quality of asteroids in 2.1. These were previously altered to improve general performance (not, the company is a bit too eager to stress, due to the Xbox One version), but the developers will now be “evaluating the lighting, fog, shadows and loading issues”. By the sounds of things, this might translate to differing graphics options that PC players with better or weaker machines can adopt to their liking.