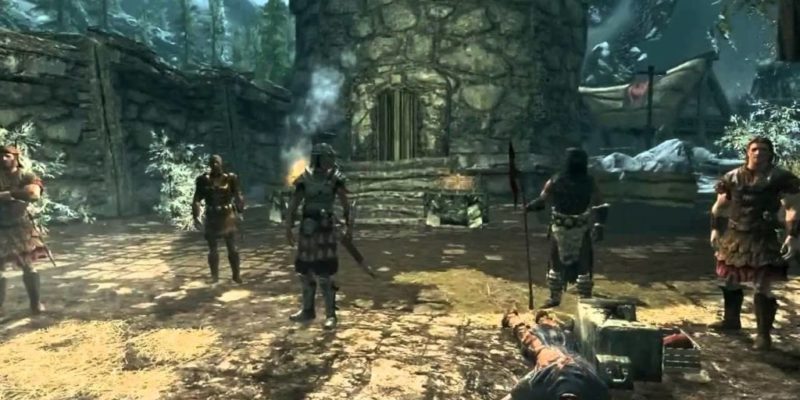 Back in 1984, when the original Elite was released by David Braben and Ian Bell, you could tell it was a special game. Well, okay, in 1984 I was two years old so I couldn’t actually form critical judgments about much beyond Thomas the Tank Engine (for the record, he is still boss.) Years later though, when I got my formative gaming hands on my elder brothers’ ZX Spectrum and Elite’s chunky box, even idiot child me could tell this was an incredible game.

Imagine this, but with black and white wire-frames and an infuriating piracy-protection system.

That box. In an era where most Spectrum titles came in standard cassette tape size, Elite showed up in a mighty cardboard sarcophagus. Inside, star maps, a novella, posters detailing the different ship specifications. All the materials of what we’d probably now reduce to a term like “world building.” Elite was mercifully free of plot or cut-scenes, but it had environmental back-story in abundance. The thriving commodities markets, police presence and wide-spread space travel spoke of a future in which human industry in all it’s creativity and misery had thrust itself across the universe.

Your task in this open universe was simple. Make credits. Make a reputation.

Now here we are in 2014 and doing it all again, thanks to Frontier Developments and a successful Kickstarter campaign. The Elite: Dangerous Beta (version 1.3) is in full swing, with that familiar sandbox structure of opportunity, galactic exploration and a whole lot of space trading. Just like the first game in the series, Elite: Dangerous dumps you in a starter ship (in this case the Sidewinder) and pushes you out into the big, dark universe with 1,000 credits in your hand. Go make your fortune, space son. Or die trying. 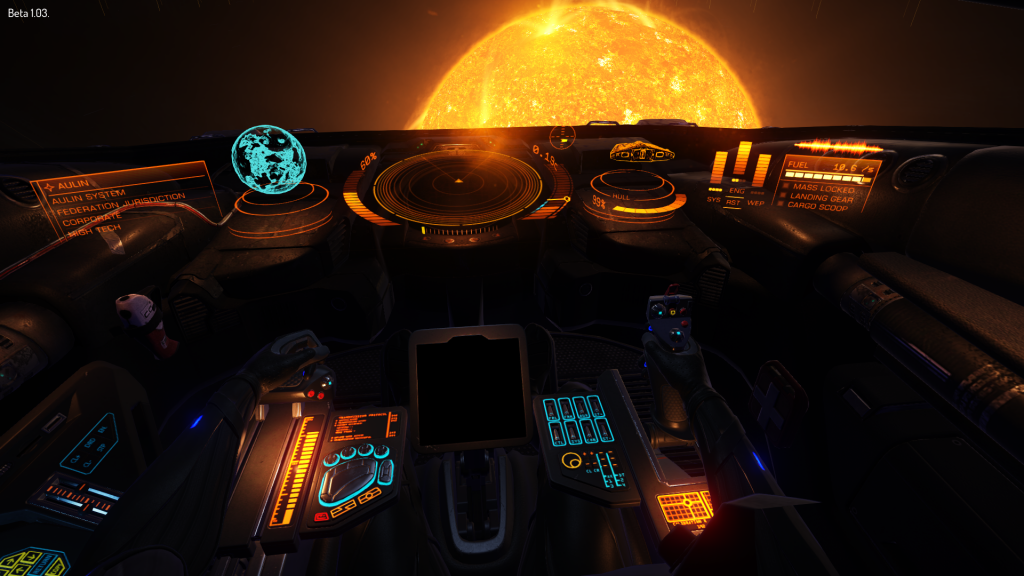 Don’t get so distracted by your own arms that you fly into the sun.

Things aren’t exactly the same though, obviously. Much as I enjoyed the minimalism of wire-frame 3D ships at the time, I’m glad Elite: Dangerous has added modern trappings like “a solid outer surface” to the geometric space-ship designs.

Cockpits now use a full 180 degrees of space to allow the optional control of things like landing gear from in-cockpit menus. I’ve no doubt the novelty of this will eventually wear off and I’ll default to using hot-keys, but there is something oddly pleasingly about “unlocking” your head view to tap out a Comms request for docking on a virtual sci-fi menu that materialises out of nowhere. Even though I’m probably one of about four games writers not to be playing this game on the Oculus Rift, it’s easy to imagine the appeal of the cockpit’s spacial presence in VR form.

When a substantial proportion of your player-base will mostly be spending their time trading commodities back and forth between space docks, adding little touches of verisimilitude (just a wanky term for the appearance of the real, no need for alarm) become quite important. Things like the edges of the cockpit’s glass starting to frost over when your hull gets too cool, or the British autopilot who sounds like the lady who reads out (or used to read out) train stops on the UK TransPennine Express routes, contribute towards making your ship feel more like an actual vessel than a front for a user interface.

You don’t leave the ship (yet) at space stations, but they’re still impressive industrial hulks.

The act of travelling through space can be so pleasant in Elite: Dangerous that I’ve taken to playing it a bit like a far-future version of Euro Truck Simulator 2. This is by no means a complaint or a criticism. Trading items back and forth through the void is a great excuse to indulge in some science fiction track-lists (the Dune soundtrack has worked rather well) or listen to some podcasts. Preferably intellectual ones about the vastness of space I guess, but that’s not mandatory. Mine are largely about football.

Speaking of that space vastness; although Elite: Dangerous has 55 star systems and the full version promises, um, billions, I’ve mostly been truckin’ back and forth between just a handful. Right now, it seems as if I’ll never get tired of firing up hyperspace and being treated to the audio equivalent of the head-rush you get when taking off in a plane. Eventually I’m sure it’ll just feel routine, but at present it’s like a wonderful backward yawn every time.

Even several days in, I’m pretty short of the money I’d need for a Cobra Mk. III (the quintessential Elite ship.) It’s the next step after a bog standard Hauler, which is really only suited to space freighting. In games people enjoy, this is called progress. In games they don’t, it’s called a grind. Elite: Dangerous sits somewhere in the middle. It’s a zen grind. Gentle progress.

Each successful dock at the rotating star-ports (just like the original, without a docking computer this can be a nerve-wracking experience on your first couple of trips) is the conclusion of another Sunday drive through the stars. Every landing pad mini-game a brief flashback to the ten minutes of parallel parking a driver will do to pass their test and then immediately forget.

The one time you may wish space ships had wing mirrors.

That’s not the only option available, of course. Don’t like the idea of ferrying cargo bays full of fish across the universe? Try murdering the fish-carriers instead. And then scooping up their cargo. Bounty-hunting and bandit bothering are both viable career choices if you know your way around a dogfight.

My primary interaction with dogfighting is through Elite: Dangerous’ stand-alone combat scenarios. In the game proper, I sold one of my (loaned) pulse lasers in the hope that would free up some additional cargo space. It didn’t. So from that point on, getting into fights seemed like a poor choice.

The scenarios though, (which also serve as a tutorial for energy management and silent running, among other things) let me indulge in all kinds of tricky dogfighting. Visual clues like vapour trails and power surges allow you to track an opponent’s speed and direction, while careful management of your power distribution (weapons, engine and systems) can be vital to survival. To stick behind even the basic AI pilots, it’s necessary to keep an eye on your speed, dipping it lower for optimal turning circles when required, and learning how to read the traditional Elite gravidar.

A smart pilot also knows when to cut his losses and flee. Sometimes a successful escape into hyperspace from overwhelming odds can be as exhilarating as a victory.

So hyped for hyperspace.

After starting off with the mouse and keyboard controls, I found that the mapped 360 controller inputs actually worked better for me. Some kind of fancy-pants flight stick would no doubt be the ideal choice, but that’s not an option for me at present. Frontier have done pretty well to squeeze all the basics of flight onto a pad, and I found it fairly straightforward to use either in-ship menus or hotkeys to cover other functions.

The beta is also running rather well at this stage, which is perhaps befitting for a game whose original entry could run on 48k of memory. There aren’t a plethora of graphics scaling options available yet (resolution is the only one, really) so my i3-2100 / 8GB / 7870 system was at the mercy of however the game had been optimised. It had some frame-rate drops near busy space stations and while loading new star systems, but otherwise held up fine. 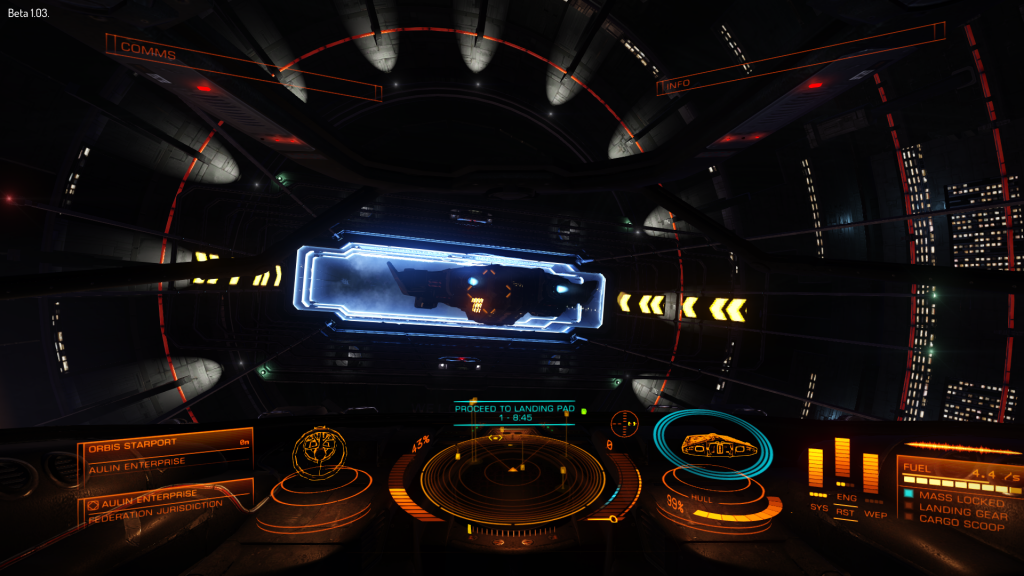 At $75.00 USD, buying into the beta is probably still too expensive for anybody but eager Elite fans. While I’ve had a great time with what I’ve played, I’m also one of those games writer types who gets stuff like this for free. Unless you happen to run a hedge fund or something, $75.00 is a large chunk of cash to throw at a single videogame. There’s a robust, exciting framework here for Frontier to develop from here, but it’s not yet the finished article and, when it is, it’ll actually be cheaper. The smart thing to do would be to wait, pay less, and get more.

But I can completely understand the desire to play a resurgent Elite as soon as possible, no matter the cost. The 30th anniversary of the game’s original release is coming up in September, and on that day I want to be flying my shiny Cobra Mk. III around Elite: Dangerous’ spectacular galaxies, creating some new memories.

Elite: Dangerous is available to buy and play in Beta 1 form (with continual updates to release, minus DLC) at the Frontier store.