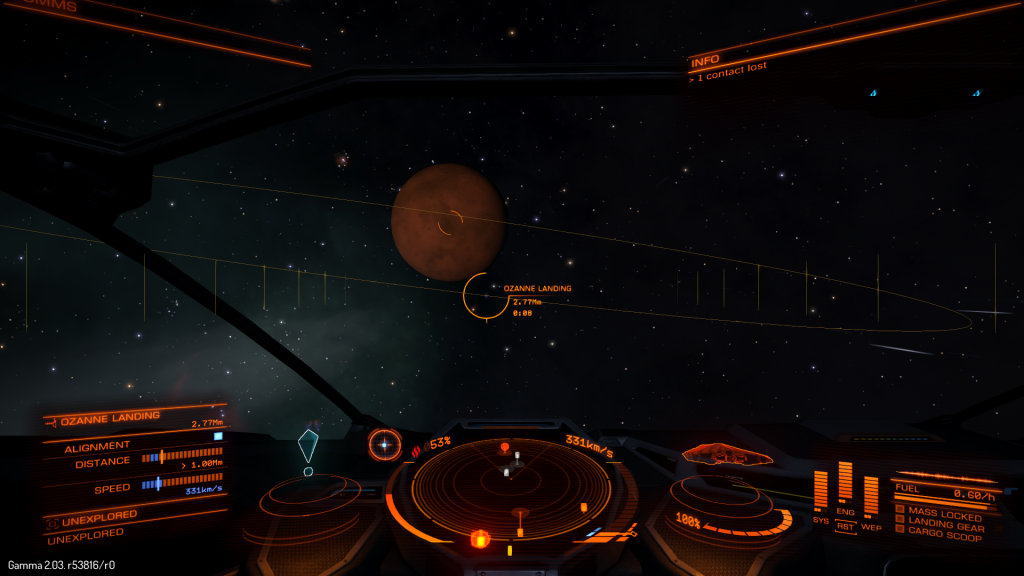 Not far to go now.

With Elite: Dangerous supercruising rapidly towards the launch date of 16 December, this is likely to the final Gamma update prior to an inevitable “launch build” patch. Update: Nope! There’s a 2.07 as well. The game was having some serious server hiccups over the weekend (on Sunday in particular,) so these will hopefully be addressed for launch.

Oh who am I kidding, it’s an online-only PC game, it’s going to have problems. Let’s be more realistic and hope for not too many problems.

Anyway, here are the update notes for the Gamma 2.06 build of Elite: Dangerous which is said to be on the way later today.

– Prevent missions related softlock when entering a location
– Don’t crash in certain cases on game shutdown and frameshifting
– Fix for trails crash
– Fix crash in sensor system
– Prevent crash in skybox generation
– Prevent crash if unable to process a loaded overlay
– Prevent getting stuck when alt-tabbing
– Don’t crash if unable to access the mission manager
– Don’t crash is user’s system can’t run the game – show an error instead
– Fix soft lock when entering a procedural dead system that no-one has seen before
– Fix soft lock when the Webservers system data queue is full
– Fix a seen-once crash on failing to get a Chatter table for an AI
– Fixed rare bug where game would get stuck shutting down
– Don’t crash if a ship goes live without a fuel tank
– Fix silent hitman randomiser number causing crashes
– Fix jettisoning all cargo attempting to jettison mission critical cargo
– Prevent the server Choking on mission advance when something generated a negative weight
– Do not update the dynamic materials in the galaxy map every frame. Ensure at least one update, and then update again if the visualisation settings ever change
– Reduce chance of usscargodropswithwrecks from spawning outside of missions
– Fix assassin branching transitions and branch feedback
– Disable pipeline renders in screenshots for final build
– Fixed a bunch of rogue fuel scoops that shouldn’t be on AI loadouts
– Fix mismatched star system meta-data
– Skip SLI/Crossfire detection if the system contains a single display adapter provided by Intel
– Added linear depth clipping to orbit lines
– Changed the “waste” category to “other” and added the new commodity “slaves” to it
– Fix for incorrect strings being used in some alternative massacre branch text templates
– Format the price of the ‘repair all’ button correctly

There are server-side changes planned too, but that changelog isn’t yet available. Update: Now it is:

– only apply the Alpha and Beta Backers’ insurance discount to the value of the ship, not all of its modules
– reduced the quantity of stock available to the AI Traders’, leaving more supply and demand available for players
– rebalanced individual Commanders’ allocation of rare commodities
– fixed a crash for Commanders travelling near the Argetlámh star system

Further update: They’re squeezing in a Gamma 2.07 update too. This is almost certainly definitely probably the last one before tomorrow’s launch build.