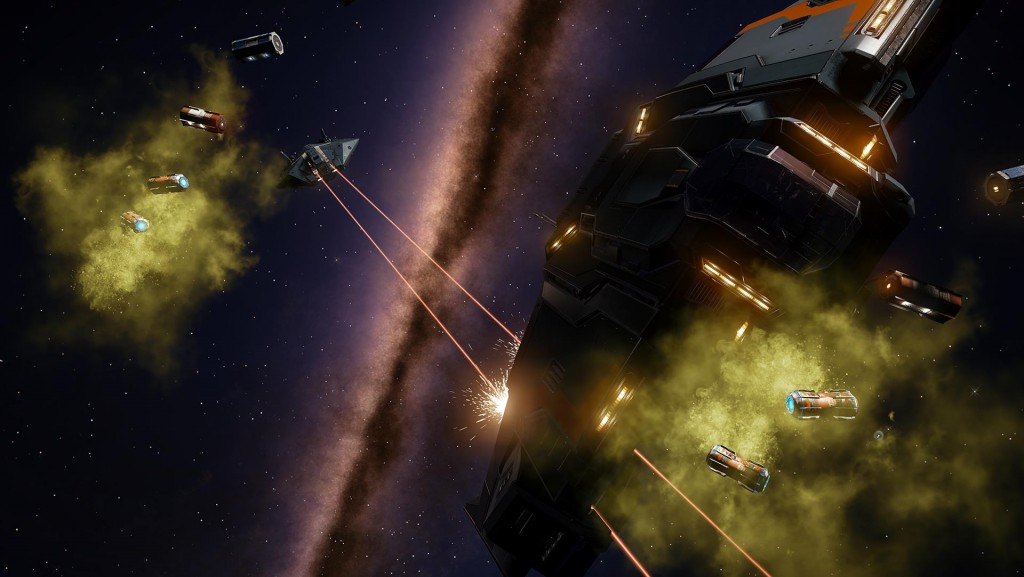 Oh Elite, it was all going so well for you.

Last week’s Elite: Dangerous newsletter contained strong implications that offline play would not be making it to the final release version; this is now confirmed.

David Braben’s development overview in that newsletter didn’t quite announce it directly, but did say “Galaxy, story, missions, have to match, and it does mean the single player has to connect to the server from time to time … A fully offline experience would be unacceptably limited and static compared to the dynamic, ever unfolding experience we are delivering.”

The original Elite: Dangerous Kickstarter, which raised £1.5 million GBP back in January 2013, stated in its FAQ that “it will be possible to have a single player game without connecting to the galaxy server.” This sentence was only added to the FAQ after potential backers enquired about a possible offline mode.

As a result, a thread on the Elite: Dangerous beta forums has exploded beyond 280 pages over the weekend (though a significant amount of the discussion appears to be driven by a smaller number with very high post counts,) and sent the Frontier Developments team into damage control mode. Certain members of the community (presumably those who backed on the understanding that the game would have an offline mode as stated,) are not at all happy.

The Frontier team have made several posts throughout the course of that thread, attempting to explain their change of policy on the offline mode. They’ve helpfully been collected in a single post, here.

According to Frontier, offline mode is no longer a viable option because “the galaxy mechanics all sit on the online servers. The data set and processes are huge and not something that would translate offline without considerable compromise to the [game’s] vision.” Unlike SimCity (which used the same excuse but was exposed as doing very little server-side) Elite does actually appear to be offloading a lot of data to online servers.

The initial plan seems to have been to “operate a dual mode with the offline version cut down,” but it’s now claimed that “As we’ve progressed more of the game has had to exist online, so much so that an offline version would be mostly a new and different game – which is something we can’t support.”

Solo play will still exist (so you can avoid PvP if you fancy,) but will require an always-on online connection. If the connection drops, the Elite: Dangerous client will have a problem as soon as “it needs to retrieve data from the server or moderate a transaction.” This isn’t an ideal state of affairs, as previous always-online games have demonstrated. Any problems on Frontier’s side will mean an interruption in single player, and anyone who either has a wonky net connection or is unable to access the internet for whatever reason won’t be able to play.

An unspoken consequence of forcing always-online through single player is that will also restrict any hacking, cheating and mod usage.

Naturally, many players are requesting refunds. Frontier hasn’t exactly gone out of their way to say they’ll be providing these, but the developer comments in the thread have been directing people to the store’s refund procedure and noted that “all refund requests are dealt with on a case by case basis.” That’s your best bet for the moment if you’re unimpressed by this decision.