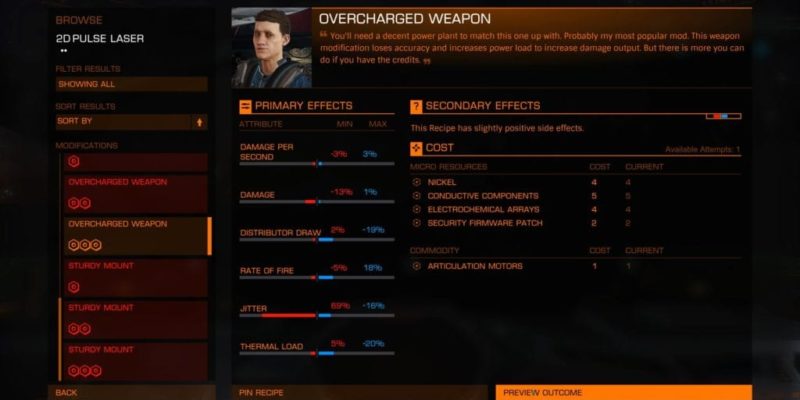 Today is launch day for the Elite: Dangerous 2.1 ‘Engineers’ update (for those who own the Horizons expansion), and for update 1.6 that all players will have access to. According to the company twitter account, both updates are now live on PC.

Assuming the Elite: Dangerous servers don’t explode from too many people trying to grab these at once, that means the game should update to either version 2.1 or 1.6 through the installer. The servers were previously down for an extended period to prepare for the release, but should now be back.

The Engineers update, for those who’ve not been following along with news updates, adds a set of enigmatic NPCs (the titular Engineers) who can set your vessel up with a number of unique upgrades. If you can find them and earn their trust, that is. That’s definitely not all though, as this gigantic new list of patch notes can attest.

– Shutdown the HMD System on destruction. Prevents AMD crash on exit
– Fix station services being left open – to crash – when player deploys their buggy while in a station menu
– Prevent soft lock if NPCs are spawning in a region that hasn’t been constructed yet
– Fix for crash when opening the edit loaded screen in CQC after unlocking new modules from ranking up
– Fix for soft-lock in module data gatherer when loading into the game
– Fix a crash if transmitting a message when there’s no location object (e.g. on death)
– Fix a crash creating certain scenarios
– Fixed crash in fighter cockpit when kinematic is ready before its target
– Fix crash when trying to use FSDInterdictor on a target object that is not a ship
– Fix crash with ship components activating before the object is ready
– Crash fix for when a weapon with the Malfunction Hit special effect hits a module that can’t malfunction
– Prevent crash when applying livery items while deploying or boarding with the SRV
– Fix softlock happening sometimes when editing or deleting a bookmark
– Handle the case where we don’t have a reference module more gracefully, and output some more useful logs for debugging this

– Fix case where save could get in an inconsistent state and game would think the player was flying while the server thought they were docked, preventing cargo collection among other things
– Fix a cause of becoming stranded in an SRV above a planet’s surface
– Make sure that flight model handles forces correctly
– Add links to new tutorial videos
– Community Goal rewards now automatically redeem after 2 weeks
– Fix Imperial Cutter hull issue blocking cargo scooping
– Set server status and in-game main menu notifications during weekly server maintenance
– Missile and Torpedoes Icons are wrong way around fixed in outfitting
– Adding ship type string for damaged fed cap ship so it doesn’t assert on contacts panel
– User cannot return to gameplay after selecting the Spoiler option in Livery Outfitting with a ship paint job already applied fixed
– Updated nested bookmark icon to improve clarity
– Various text fixes

– Fix founder delivery to not go to smaller ports / outposts
– Fix for mission cargo being marked as illegal salvage when dropped from a target ship
– Temporarily remove SRV mining
– Reduced the chance of wrinkles from test levels
– Reduced chance of treasure tips from test levels
– Rather than the total number of micro resources (spanning all types), say what type and how many of that type we need space for
– Make planetary missions use rank to determine base strength
– Remove economy dupes in info panel and popup when secondary economy is the same as main economy
– Remove low level materials from the rewards lists so that players can’t be given them by missions
– Various text fixes

– Improvement for ice planets to increase the detail in the mid distance. Required Light power (albedo boost)/Mid amp increase and a larger mid fade distance
– Correct the proclaimed maximum terrain feature height on planets to fix issues with some physics patches not generating

Things you need to know about Paragon – Hints and Tips