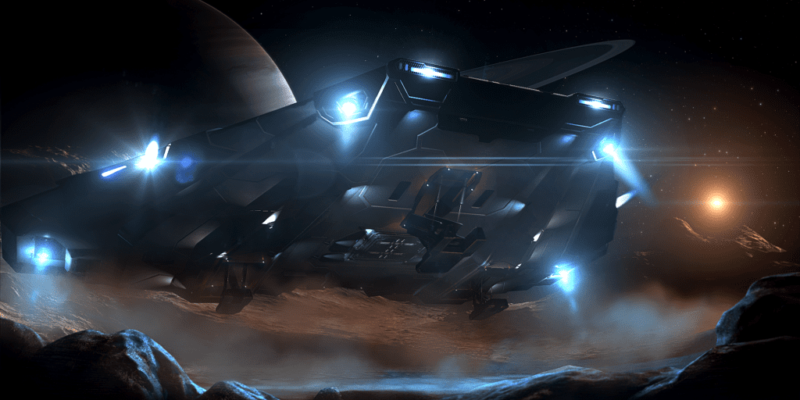 Frontier’s big Gamescom announcement has turned out to be a ‘season’ of expansions for Elite: Dangerous, under the heading of Horizons.

The first of these updates will be planetary landings, a feature that people who’ve followed the game since its Kickstarter and beta periods will have been expecting in this first paid expansion.

Those who backed the game at the appropriate levels at the time (the ones offering ‘lifetime additions to the game for no extra cost’) will be getting the Horizons additions for free. Other existing Elite: Dangerous players will get a £10 loyalty discount off the pre-order price of £40 GBP. Everyone (no matter whether you have the expansion) will still be flying around the same universe.

In Horizons, scanning airless planets and moons may lead to the detection of mystery signals, crashed ships, deposits of minerals, or other space enigmas. After landing to investigate further, players will be able to cruise around (without loading times or breaks) in the new Surface Recon Vehicle, the Scarab.

Your SRVs will be able to explore the planet’s surface (on your own or with co-op friends,) engage in mining and recovery operations, and fight hostile forces.

By the sounds of things, Horizons will be introducing the Cobra Mk IV ship to Elite: Dangerous as well.

That’s just the first set of updates, however, as Frontier intends Horizons to be a staggered set of “major gameplay expansions” to the title that will last into 2016. For now, here’s a cinematic-style look at planetary landings.