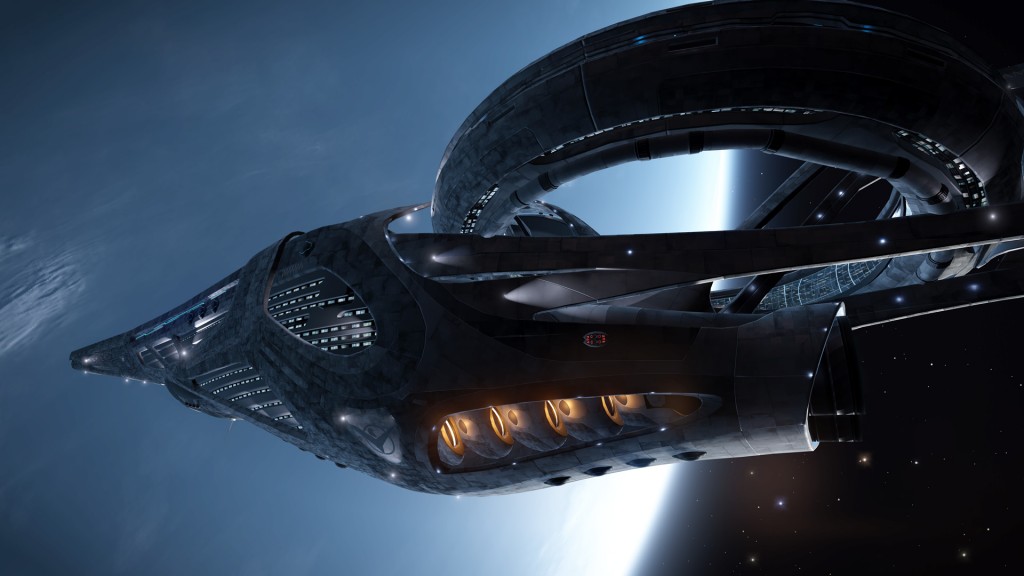 This was the newsletter “sneak peek.” Looks suitably intimidating.

Frontier certainly aren’t hanging around with their Elite: Dangerous updates, and have released yet another one updating the game to Gamma 1.02. The announcement thread for this says 1.02 is “incoming,” but it’s actually available now.

To get it, fire up the Elite: Dangerous launcher in the usual manner. Newsletter #51 is also out now.

Here are the notes from the change log. It’s mostly fixes and a bit of server-side stuff:

– Fix kinematic soft lock loading game
– Fix for softlock on shutdown regarding fog volumes
– Fix possible memory leak in the system map
– Add in some missing metadata from populated authored systems far outside the usual generation range
– Missing backer system ‘Pepper’ added
– Correct the station ID for the station in 17 Draconis
– Deeper telemetry to diagnose what/why we’re getting stuck entering the game in certain circumstances
– When the server has too many stellar forge request, bounce it back so the game can try a different server
– Fix for lighting not appearing in the right eye on stereoscopic modes
– Handle the case where directional lights are removed while processing the view culling data
– Improve MTU discovery handshake
– Ensure location s are not sent if they are no longer valid
– Improve upnp clean up code
– Provide feedback telemetry when system data is received from the server which is either internally inconsistent, or inconsistent with the game’s own data
– Additional telemetry to help get to the bottom of why some players get stuck entering the game.

– Saud Kruger’s introductory discount on the newly released Orca has proved incredibly successful. Shipyard dealers report that the heavy discounts have now expired and the ship has returned to its normal pricing across the Galaxy.
– Stop advertising illegal commodities in the galaxy map trade routes and in the commodities market screen.
– Never advertise illegal commodities for export from a station on the system map and only advertise them for import when there is likely to be a black market available to purchase them
– The strange interference affecting Space Station Services and Frameshift Drives in some areas of space has finally subsided. Commanders should experience much less disruption when flying to the following systems:
Fomalhaut, LHS 450, Exioce, 17 Draconis, Aditi, BD+22 4939, Canopus, Exphiay, Fehu, LTT 9846, Pepper, Quince.
– After an upgrade from Universal Cartographics’ licensing sub-division, the AI traders’ navigation computers now let them satisfy supply and demand for commodity markets from all stations, not just those that control the starsystem.

DayZ claims it will be out of Early Access in 2016