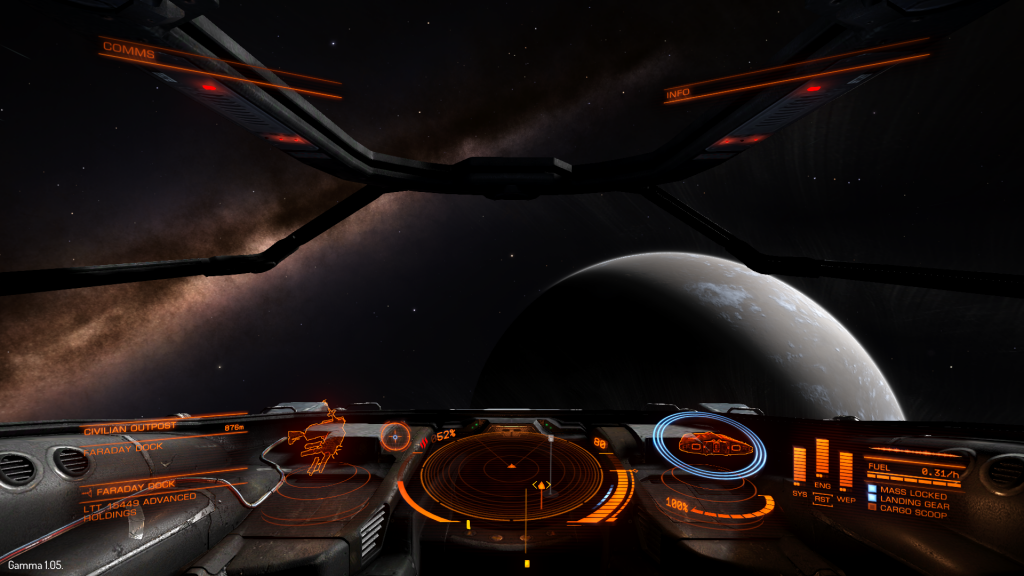 Hot on the heels of Gamma 2.0, is a fresh 2.01 update containing various tweaks and fixes for the ongoing Elite: Dangerous pre-release process. It’s available right now, because I just downloaded it, so you should have the option to upgrade in the Elite: Dangerous launcher (assuming you have Gamma access and all that.)

This one mostly seems to be providing additional fixes on top of the substantial additions (route planning, extra ships, mission/reputation summaries) from Gamma 2.0.

In addition, Frontier say they are aware of the “wear and tear” paint job repair prices being a bit on the absurd side. These should presumably be toned down now.

Some players are reporting difficulties logging in, or getting stuck on the rotating orange wire-frame ship loading screen. A fix for this is apparently expected later tonight.

– Fix one cause for server disconnects when exploring
– Fix asserts when quitting the game and the ship isn’t shut down
– Fix the issue with users unable to use the control bindings if they dont have the en-GB layout preloaded
– Make sure that location data is available before activating crime component
– Fix for hardware cursor in borderless windowed mode
– Use combined major+minor reputation for mission requirements
– Add extra checks to make sure a set of police scenarios don’t appear in dead systems
– Fix abandon branch of collect missions
– Balancing pass on USS frequency, now should be generally a bit more prominent. Tweaked up the chance of them appearing in relation to your distance from the capitals and upped it in relation to the population of a system
– Use the correct Harvard/temperature table for bright giants and super giants when finding the nearest Yerkes classification of generated stars
– Improved supercruise lens flare to work with both the normal game and occulus rift
– Optimisations for retrieving data from SpectralClasses by temperature values
– Fix an issue with classifying authored ammonia worlds
– Made the initial position saftey check handle spawning at close binaries by first updating its universal address before checking to see if the position is inside the body
– Fixed incorrect Python manufacturer name from Zorgon to Faulcon deLacy
– Increased the duration of warning/positive messages
– Don’t try and connect to server if we’re in the middle of quitting
– Glowy Orrery model is now less glowy and slightly smaller
– Steps to improve core in galaxy map
– Make the dolly distance for narrowing the range of stars to show based on the focus range of the galaxy map
– Remove the update tick from the galaxy map core. The disappearing systems was more distracting and helpful
– Change the narrowing of the search range whilst moving in the core to be dependent on dolly position, so doesn’t affect the zoomed in view
– Change the focus of the star generation to be at the galaxy map camera when not zoomed in, instead of halfway between the camera and the cursor
– If the client returns to the main menu, stop trying to serve them missions related information
– Fix collision mesh on Anaconda
– Soundbank updates
– Don’t repeat server player info check (fixes telemetry spam)
– Hovering mouse over paintjobs causes paintjobs to be reapplied when looking at decals fixed
– Increased completion time for Federal Collect missions
– Voice Comms – Forever hanging ringtone on client fixed
– Galaxy map search needs to find authored planets and starports as well as systems
– Balanced wear values down by a large amount across all sources
– Gamepad stops responding after confirming two friend requests in-game fixed
– ED-27599 Rework of training scenarios, Docking tutorial split in two, training scenarios reordered
– Ensure the number of items in the cartography sell page is correct
– Automatically add “Conflict” tags to ships in warzones, which includes ships spawned from capital ships
– Instantly refresh the reputation screen’s data when you do something in a mission
– Increase route planner spiderweb distance
– Fix for a malformed text string in slave missions

And a short server-side change-log: