If there’s one time you don’t want things going wrong on your servers it’s over the holidays as Elite Dangerous problems persist.

Late last night players started to notice weird issues occurring in Elite Dangerous. cargo would go missing, goods can not be sold at stations, scans not functioning, players with missing recently purchased ships, stacks of money being lost or made, and more. Whatever has happened in the Elite universe has now had a major impact on most of the key gameplay mechanics that make the game worth playing. 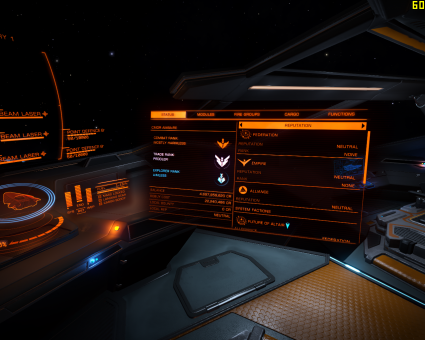 This chap has suddenly got neatly 5 billion in the bank.

It’s now been about 24 hours since the problems started to appear and there’s still no sign of a resolution or mention of a rollback (if possible) from Frontier. Until someone from Frontier pops up with an explanation and a solution to the problem it might be a good idea not to do anything major in the game.

A suggestion, which has apparently been a bit hit or miss, is that if the server disconnects or something weird happens, ALT-TAB out then go to the PC task manager and shut the game down by killing the process. Once reloaded things might be restored.

Whatever the problem is, and it’s looking like some kind of underlying DB issue or miscalculations on the transaction server, Frontier have not been around to address it yet but you would hope they make an appearance considering how problematic this is for players right now.

Update: Frontier has now posted an update on the problem (thanks Viejoviajero):

On January 1st 2015 at 11pm GMT we had an issue with one of our databases . One of our engineers spotted this immediately and removed the database from circulation. This took around 2 hours to complete, test and make live to commanders. In this time, a relatively small number of commanders were affected by failed transactions and small losses in credits. These commanders should have received their refunds, along with a 20% bonus as in previous instances.

If you are still having problems, please create a support ticket for our customer support team via https://support.elitedangerous.com.

Finally, we do have 24/7 server engineer coverage over the holiday period to catch problems such as these. However, to further communicate these issues to commanders, we are currently working on creating a server status page where we can communicate any immediate issues or known problems. This should be live within the week.

Apologies again for the disruption in service.

Great to hear they will implementing additional ways to communicate with the players in the future. Time to head back into the cockpit.