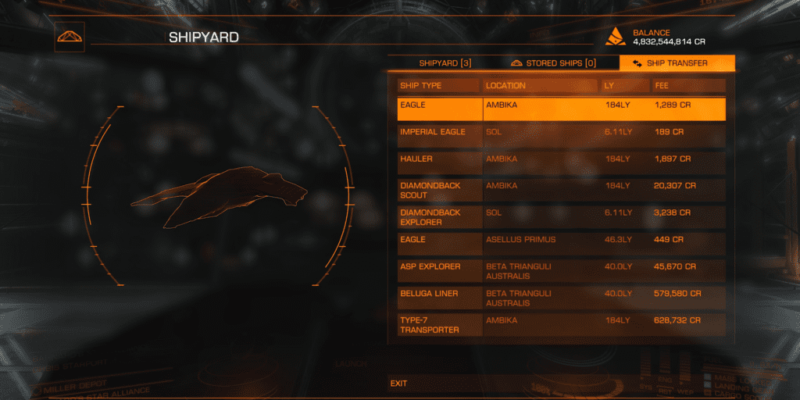 The great Elite: Dangerous ship transfer debate has been ongoing since the announcement of the mechanic at GamesCom, and the latest community vote on the subject will be concluding on Monday 12 September. Get in ahead of that date if you want your opinion to be counted.

For those unaware what this is all about, Frontier announced at GamesCom that one of the quality-of-life changes to be added in version 2.2 would involve the physical transfer of ships between systems. Rather than having to actually fly your current ship back to the system where another owned vessel was ‘parked’ to switch over, Elite: Dangerous was going to let you pay a fee to have the ship hauled over to your current position.

Most of that idea seemed to be well-received, but a portion of the player-base were not at all happy with the “transportation is instantaneous” aspect. The arguments against it are summarised in this post about the vote on Frontier’s forums. Those who didn’t want instant transfer said it seemed implausible from a lore perspective, lessened the need for decent frame-shift drives, under-mined galactic scale, and so on.

The debate convinced Frontier, who state in the above post “We are coming around to the idea of having a delivery time for transferred ships. It also follows, that if we have delivery times for ship transfer, we should have them for module transfer as well, as both actions use the same concept.” But before they commit to that, they’re holding the current vote. The result won’t be the absolute final arbiter of how the ship transfer mechanic ends up being implemented, but if it turns out that a “significant majority” want it to work one way or the other it’ll probably sway Frontier’s final decision.

Registered Elite: Dangerous players can vote over here. The question posed is as follows:

POLL: Should transferring ships and modules to your location take time?

OPTION 1: No, the transfer should be instant.
OPTION 2: Yes there should be a delay of 5 minutes minimum, 100 minutes to cross the human bubble, edge to edge.