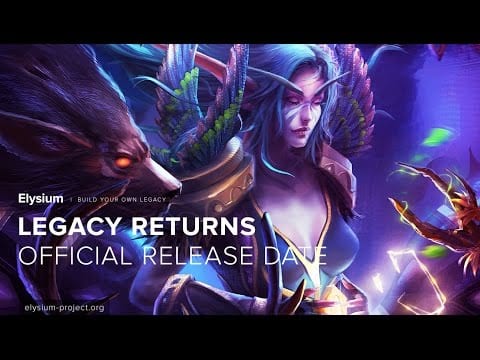 The Elysium Project’s efforts to bring PvE and PvP Nostalrius servers back to World of Warcraft will be culminating with a release date of 17 December. That’s confirmed by a new video release (below) from the team.

“To confirm what is stated in the video, we are launching the Nostalrius PvP & PvE servers at the same time,” the news posts about the release states. It adds “We’re sure you will have many question, but we ask you to hold on to them and take this time to relish the announcement.”

A full update with further details about the release is promised “next week”. As this was posted on Sunday, that could mean later this week, or the week beginning on 10/11 December. Either way, there’ll be more news ahead of the 17 December Nostalrius release date.

The relaunch of the server came as surprise as Blizard had met with the Nostalrius team earlier this year in an attempt to have Blizzard launch official legacy servers for World of Warcraft. When there was no announcement at BlizzCon back in November, the Nostalrius team decided Blizzard was taking too long to open further dialogue and announced the Elysium project.