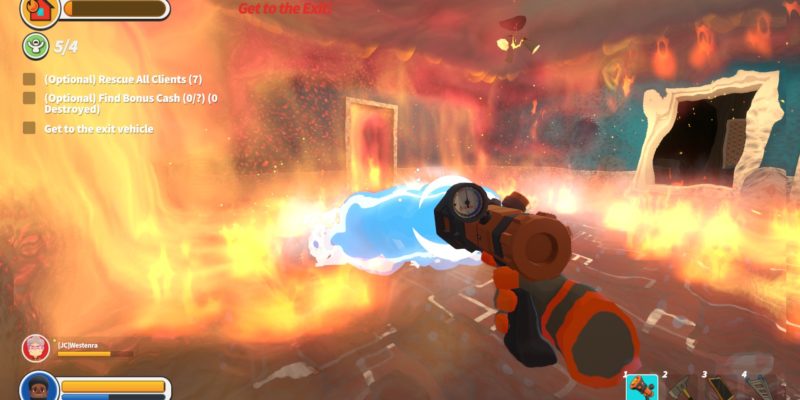 I’ve been enraptured by firefighting games for a lot of years now. That fascination generally comes with a big asterisk, though, because that genre has never been particularly active. Despite the glut of simulator games on Steam, options that focus on firefighting are few and far between. But Embr changes this. Combining firefighting with zany four-player co-op seems like a total no-brainer, and the game, which enters early access this week, is off to a very promising start.

There’s an app for that

If you’re wondering why the word is spelled like that, it’s because Embr‘s eponymous app is an Uber parody. You don’t play as a member of a fire department, but you arrive at a burning building as an app-based freelancer sent out to available fires in your area. The game’s tone is extremely cartoony and over the top. When you go into a burning building to rescue the clients trapped inside, you’ll often find them sitting and texting without any regard for what’s going on around them.

Doing well in a mission informs the review the clients leave you, so they won’t tip as well or give you a higher rating if you let their uncle die. That’s literally a scenario that happened, by the way. One of the people in the building died in the fire and the client left me three flames (as opposed to stars) and a mostly unconcerned comment. Embr has an absolute field day roasting (sorry) society. And you actually manage everything through the app itself on your smartphone. 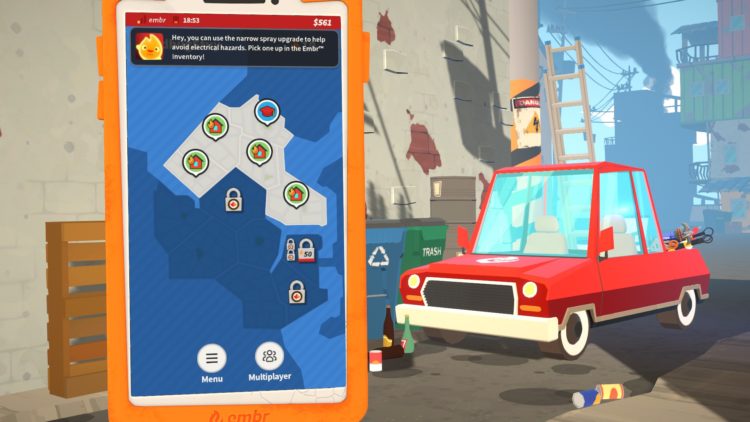 It’s getting hot in here

Missions in Embr come in just a few varieties so far. The most common are rescue missions, where you show up to a fire and have to go in and rescue a set number of the building’s occupants. These buildings are often residences, but there are others, such as a crab restaurant. If you rescue all of the occupants, you’ll get bonuses. Likewise, each job has piles of cash stashed away and you can score more points by finding these and getting them out of harm’s way. Or you can put the money in the back of your car, which results in the app showing a pop-up that makes it clear that Embr takes no responsibility for employee malfeasance.

Some missions also give bonuses for finishing the job with the building’s condition in a certain state. There are salvage missions, where you just go into the house and grab as many valuable objects as you can and put them outside before the fire gets to them. I also saw an escape mission which tasked me with, you guessed it, escaping from a burning building. These and other objectives during missions can require you to solve small puzzles in order to progress.

For instance, sometimes you’ll need to provide power to an object. There are power sources and light switches all over and, once they’re damaged by the fire, they become electrical hazards. If you spray water in these areas, the water will become electrified and will hurt you if you stand in it. But connections get damaged, so you’ll need to use water to get electricity from one point to another to turn something back on. Naturally, this can create a large problem for firefighting, as you’ll be spraying a lot of water. Most places have a fusebox that can be turned off, though, which is usually the way to go to stay safe. 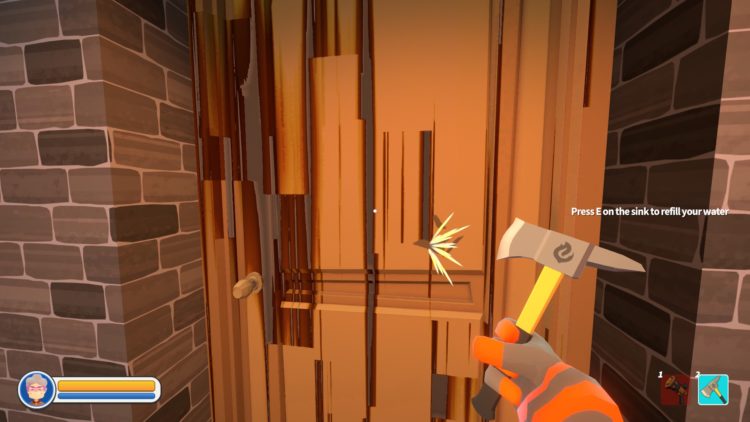 A game about being a firefighter wouldn’t be any good if the firefighting itself was lacking, but Embr handles it well. You start the game with some sort of water gun. It looks and functions like a water hose, but you don’t have to connect it to anything. The way it works is very self-explanatory. You aim it at fire, spray, and then the fire goes out. There are also other items you can get to fight fires, such as a fire extinguisher. Those can’t be refilled, however, so you’ll mostly be sticking with ol’ faithful. Whenever you get low on water, you just need to fill it up at a sink. Every location has a sink or two filled with water for this very purpose.

If you want to actually put the fires out, you’ll need to be proactive about it. Simply spraying some water on a surface briefly won’t lower the temperature of the area enough for the fire to not start again. You can douse an entire area and still have little, circular embers on the surface that will eventually reignite and cause the fire to reappear. You have to make sure an area is thoroughly soaked before you can safely move on. Not that you’ll always have enough time to put the fires out completely, mind you. In the time it takes to do that, someone can easily burn to death.

Actually saving people is similarly simple. You can’t open doors in Embr, so you’ll need to break them with your ax. You can pick people up and carry them to designated safe points outside. Or just throw them around if you want them to get there faster. Doing this might knock them out for a bit, but they’ll be fine. As long as you don’t drop them from high up — that turns them into a skeleton. 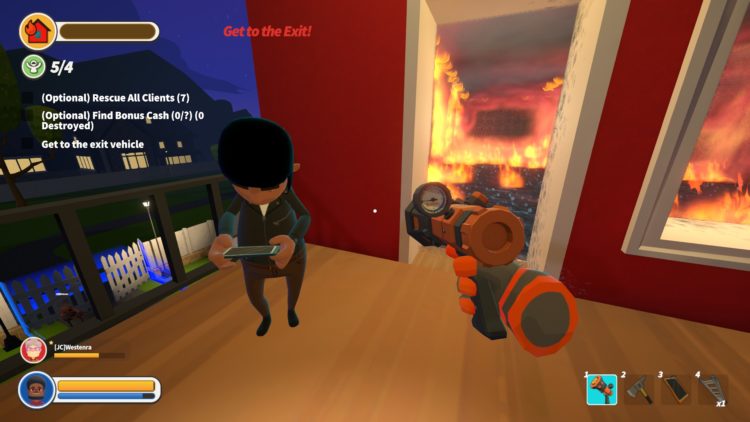 The default loadout comes with a device that shows you where people are located in the building. You simply track them down, put out any fires in your way, and get them to safety. Additionally, you have a ladder you can use to get around more easily. The loadout can be changed in the app, which also allows you to purchase new equipment or upgrade the ones you already have.

The co-op in Embr works well, too. I couldn’t invite a friend on Steam directly, but I created a room that he joined without issue. The default character model is an old lady and neither of us could figure out how to change it during our session, so we were just a couple of old ladies putting out fires and stealing piles of cash. I did figure out how to change my profile picture, though. Good times.

The heat of the moment

Embr already makes for a compelling experience. The missions are entertaining and putting out fires and rescuing folks is fairly satisfying. I’m looking forward to seeing how the game develops and playing it with full four-person teams. But really, I’m just glad that there’s a good firefighting game on Steam. Even if it’s immensely silly and lets you drop people off buildings.