Such is the dizzying nostalgia high generated by Master of Orion II, most ‘4X’ strategy games find themselves confined to space. A lot of those titles are doomed to chase a decaying dream with tragic inevitability, but a few do manage to squeeze out from under Orion’s shadow and create their own intergalactic 4X niche. Amplitude Studios’ Endless Space was one of the more successful efforts of recent years, and the developer is now trying their hand at a more fantasy-themed 4X: Endless Legend.

This area is having a slight resurgence, with Age of Wonders 3 also available for those who like their 4X titles a bit more Elven than Alien. Endless Legend is steering towards more of a futurist fantasy tone, dispensing with traditional magic and instead attempting to create some factions that fall outside the usual stylistic crutches of the genre. While some of the races have a touch of familiarity, you won’t find any mine-loving Dwarves or warlike Orcs on the surface of the planet Auriga. 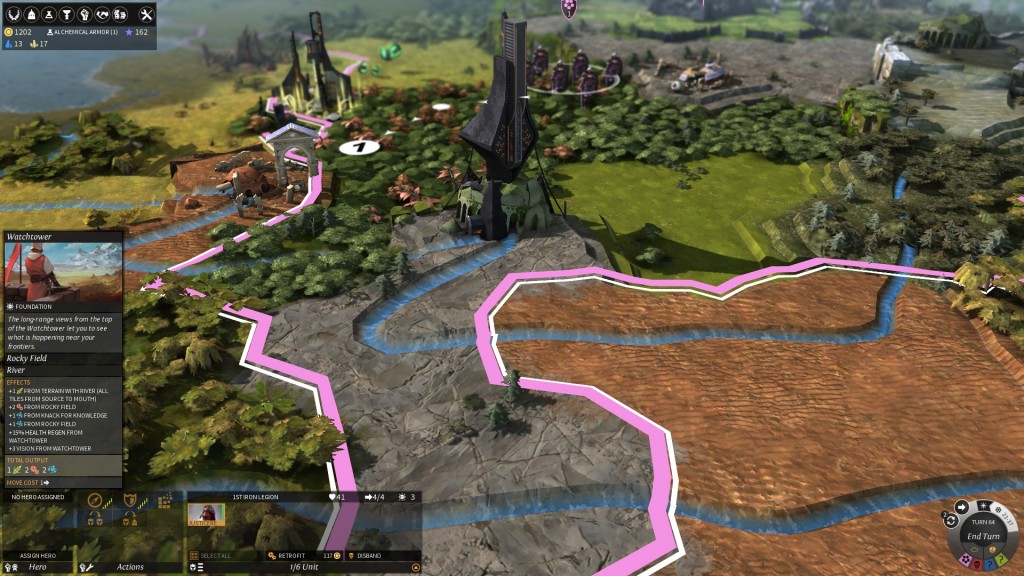 My stylish watch tower keeps an eye on those hot pink borders.

I’ve been opting for the Vaulter faction, one of the four (out of an eventual eight) playable in this Early Access version of the game. They’re a group who have access to a certain amount of forgotten knowledge, wanderers with a tradition of appointing women as leaders. While their basic troops fight with mini crossbows, they also have the ability to field Titans; psuedo-robotic Knights. That serves as a pretty good example of the unorthodox approach Amplitude has taken to faction design. It also confirms that Endless Legend takes place in the same universe as Endless Space, as the Vaulters were playable in a DLC addition to that title.

Other factions include the Broken Lords (once proud warriors who are now husk-like armour shells who must feed on the living,) Wild Walkers (Elvish types who used to dwell in forests but went a bit nuts from psychically communing with beasts) and the Necrophage (a hive-mind like collective of insectoids who lay eggs in their fallen enemies because they are disgusting.) Again, not your typical fantasy line-up.

For anybody who did play Endless Space, the Endless Legend user interface will be pretty familiar. Many of the same resources (such as Dust for currency) are in evidence here, and the management of regional cities is rather reminiscent of controlling colonies. Happily, designing friendly user interfaces seems to be Amplitude’s forte so it should be possible for anyone to get started with as much ease as is ever likely in a 4X title.

If you didn’t play Endless Space, this probably looks complicated. It’s not as bad as it appears.

Early Access Endless Legend currently lacks a tutorial campaign (one is planned, it’s just not present yet) so the only way to learn is to jump in to a single player match with up to five other AI factions and just feel your way through the game. To help clarify any moments of confusion, there’s a pretty extensive text manual available too. I only felt compelled to check this a couple of times, but I’ve also played a fair amount of Endless Space so getting to grips with Legends’ systems wasn’t too difficult.

While many of the features are complete, the only way to play Endless Legend at the moment is as a military faction eager to crush all other opposition. More peaceful aspects (those that presumably more time-consuming to code) like proper diplomacy and trade options are not yet present. There’s a full diplomacy screen and what appears to be the intent to add the usual methods of keeping partners sweet with technological offerings, but AI interactions right now don’t extend far beyond declaring war.

Research and construction of troops is fully in place, and functions somewhat close to the outfitting of different ships in Endless Space. You begin with a basic troop type (a crossbow wielding Vaulter marine, for example,) but can edit and customise this base once you begin to unlock additional weapon options through the research tree. Discovery of key resources within your territory, combined with the technology to exploit it, eventually allows you to create troop-types with improved weapons and armour. Retrofitting of previously constructed troops is possible too, for a price. 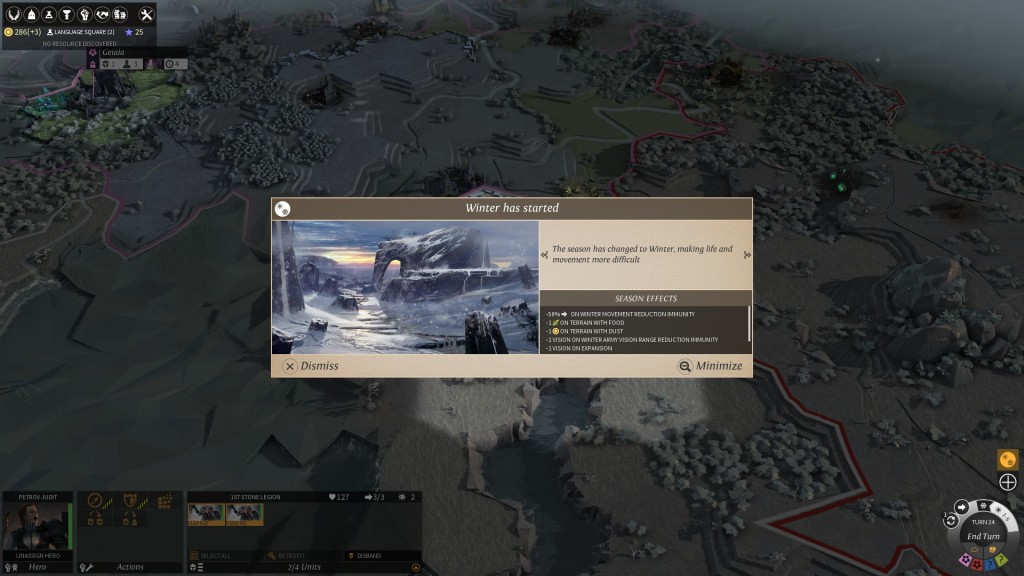 Heroes are back from Endless Space too. Expensive, capable individuals who can either be set to work inside cities for various bonuses, or provide an excellent accompaniment to a roaming army. Like troops, heroes can be kitted out with upgraded equipment and also have a skill tree to fill out as they gain in experience.

These aren’t the only options for your fighting forces in Endless Legend, however. Each region is co-populated by a minor faction who start out as hostile, but can be assimilated into your empire to provide additional, and often more exotic, unit types. Assimilation can be achieved through brutal domination of their dwellings, but with the right diplomacy option unlocked it’s possible to either just bribe them or perform a helpful task on their behalf to win loyalty. A new resource, influence (generated like so much else in your cities,) is required as the final step to welcome arachnid-centaurs (oh yes,) flying demons or devoted warrior nuns into your fold.

Early on, it’s only possible to use the troops from one assimilated minor faction at a time, but that restriction may lift as the empire expands. As a big fan of Floodland and the effectiveness of fanatical religious soldiers, I stuck with the Sisters of Mercy. They proved their usefulness in combat time and again.

Shoot at those guys please. Thanks.

Combat encounters in Endless Space didn’t exactly meet with universal approval, but Amplitude is sticking to their hands-off approach with Endless Legend. Despite the preponderance of hex grids, this isn’t an in-depth tactical war game. When two forces fancy doing the sharp steel shuffle, the ground peels away to form an abstract battlefield (like most of the in-game presentation, this is terrific) and it’s possible to deploy individual units in the desired positions. From this point on though, the commands are limited to which enemy forces each of your units should target and whether they should maintain aggressive, defensive or “hold your ground” type behaviour. It’s possible to pull off some rudimentary tactical plans with this set-up, like holding missile troops back or attempting to use terrain to funnel the enemy into a trap, but it won’t satisfy anybody who was hoping for close control over every detail of battle.

Personal preference and expectations will dictate whether players warm to this system, but it does a pretty good job of approximating a commander attempting to deliver a general battle plan from a distance. It’s also a direct way of rewarding a competent overall strategy, because if your tech and resources are up to scratch you’ll be able to produce troops of sufficient quality to win most encounters. Specifics of combat might alter a bit before Endless Legend reaches a full release, but if the run-down of what’s finished and what’s coming is accurate, the “core battle system” is likely to remain just about the same.

Alongside four other playable and a few more minor factions, Endless Legend still has quite a bit to add over the coming weeks and months. How the AI handles any situation outside of war will be rather crucial to the long-term viability of single player, so the introduction of proper diplomatic and trade layers will be a major addition. Multiplayer will be implemented in future too, as will side features like naval units.

Soon, this map will be pinker than the Victorian-era British empire.

Right now, Endless Legend is just about feature-complete for a single player, military-focused campaign. The presentation is tremendous, with what can perhaps now be referred to as Amplitude’s trademark excellent in user interface design and a clean visual style. Unusual factions and interesting lore are positive signs for a blossoming 4X title, and the progressive series of tech trees (actually more like circles) have interesting choices that intertwine with your overall strategy.

I’m always wary about recommending games in Early Access too eagerly, and not about to make an exception for this one. But I can say that as a fantasy-themed follow-up to Endless Space, Endless Legend is so far coming together in the manner that I imagined and hoped it would.