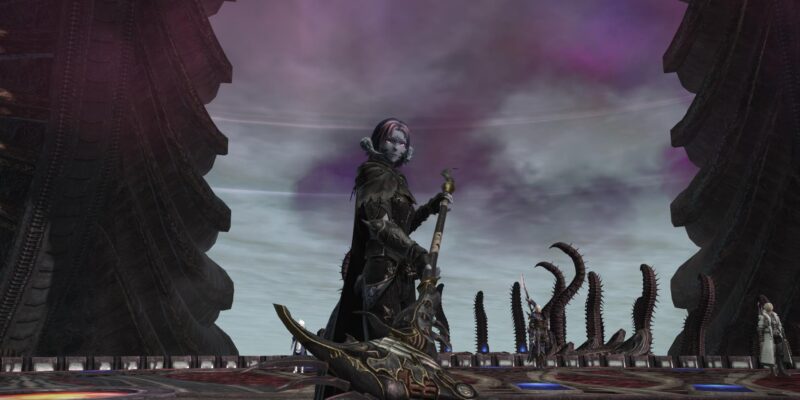 Along with a bunch of other media folks, I’ve had the privilege of spending a day messing around with Final Fantasy XIV: Endwalker, and now I’m free to tell you all about it. Endwalker‘s first dungeon, its areas, its jobs. That said, “all about it” is a bit of a misnomer because what we could actually see was limited, so let’s quickly go over how I’m dividing this up and what I won’t be discussing.

In terms of spoilers: if you’re up to date on current content and have watched the Endwalker trailers and reveals and so on, there’s not much “new” here except maybe the identity of the first dungeon, which is going to be down in the very first subheading. But I’m not going to be revealing unseen areas or important plot details. Obviously, if you want to stay completely fresh (or aren’t up to date), you shouldn’t read this. But if you’re caught up on content and know about the revealed areas and so on, you should be safe.

We’ve got other articles up talking about the Reaper and Sage in detail, as well as third article discussing the areas we got a look at and the “old” jobs I played with. But here? Here, we’re going to talk about the dungeon we got to play around with. 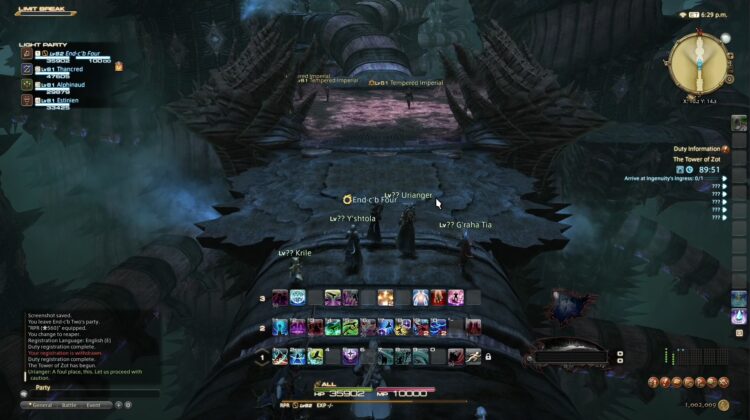 Yep, the name of (what’s probably) the first dungeon is the Tower of Zot, which — as someone who played Final Fantasy IV as a young ‘un — is enough to send chills down my spine. Better yet, the dungeon’s theme is a fantastic, slightly more uptempo version of “Golbez, Clad In Dark” (or however you wish to translate it). In short, if you love your old-school Final Fantasy games, this dungeon is a glorious throwback. This really is the Final Fantasy IV expansion.

Of course, if you played Final Fantasy IV then you also know two other things. First, this place is going to be hard as balls. Second, it’s going to involve the Magus Sisters, who are also going to be hard as balls. Both of these things are entirely accurate. Obligatory disclaimer, though: everything I saw and played was part of a development build, so it’s absolutely subject to change.

Plot-wise… well, from what glimpses of dialogue I got from running it via the Trust system and the like, it seems to be one of the giant Garlean/Telephoroi towers erected in Thavnair. It definitely seems to be an earlier dungeon (it synced levels to 82), so it’s probably the first dungeon. Probably. I would not be entirely surprised if this was perhaps the 83 dungeon but was synced down, but we’ll find out at launch. Either way, it’s the weird biomechanical tower you’ve seen in the trailers. 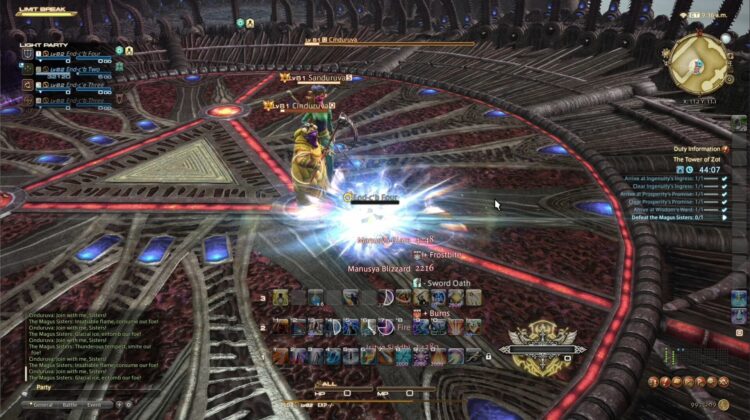 For what it’s worth? I was not kidding about the difficulty. I’m sure I’ll get around to writing a full guide for this dungeon when Endwalker releases, along with all the rest of them, but this was a mighty step up from most Shadowbringers story dungeons, with two of the three bosses having a whole lot to pay attention to.

My first run-through was with other players, and we were all on our main jobs. We scraped through without a wipe, though there were definitely a few mechanics I didn’t pick up on. After that, when messing around with more unfamiliar jobs, things were far rougher.

Again, I have a strong suspicion there’ll be some retouching, because (considering we were synced down from level 90), wall-to-wall pulls were dangerous enough as it was. And then we get to the bosses. 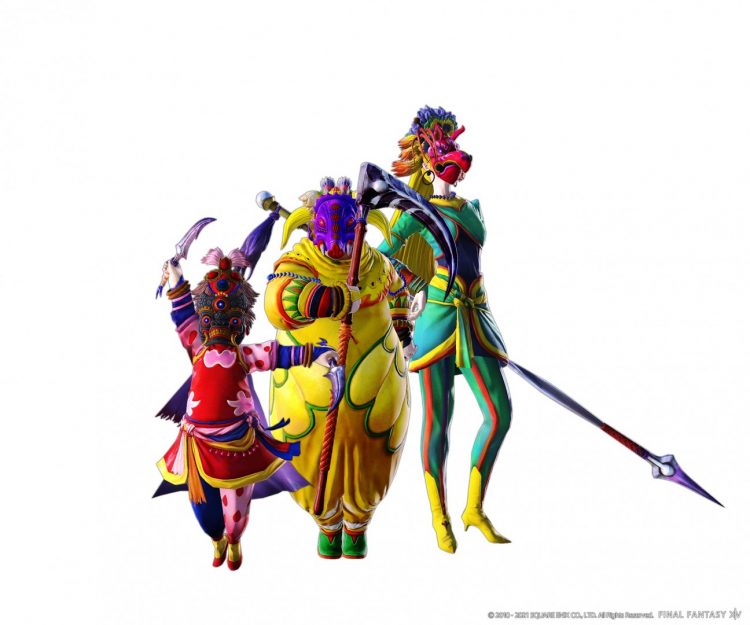 It’s the Tower of Zot, so of course we’re fighting the Magus Sisters. Sandy, Cindy, and Mindy (reimagined here as the three Manusya seemingly summoned as primals: Sanduruva, Cinduruva, and Minduruva) challenge you on your way up the tower. Mindy is the first, Sandy is the second, and then Cindy takes you on at the top… and very quickly summons her sisters to aid her, creating a three-on-four battle.

They’ve all got their tricks. Mindy uses Manusya Blizzard, Fire, Thunder, and Bio, all of which have different AoEs: Blizzard sends out cones from her position; Fire hits everywhere outside of melee range; Thunder is AoE blasts that go out in cardinal directions from her; and Bio hits everything to one side of her. Simple enough. Except that as with most bosses, she starts by using these in a simple manner, and then they get more complex. 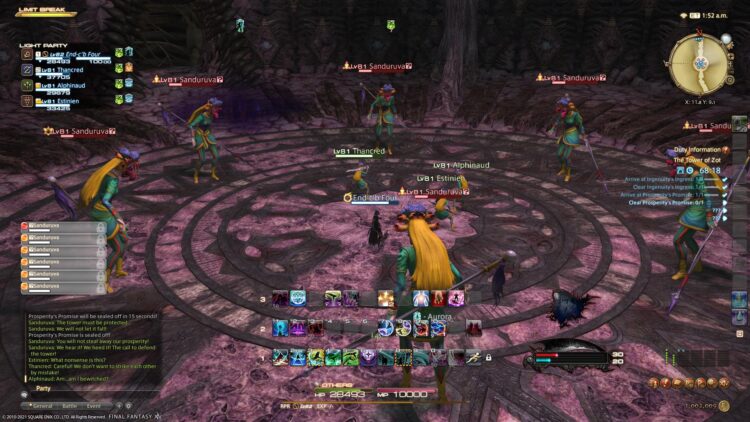 The real one is the one that isn’t taunting you with emotes.

Sandy is a bit more of a breather. She likes to target each party member with a directional AoE and summon orbs around the arena which will explode after a short period and send you Berserk, running in to attack her just as she does a point-blank AoE. She relies more on trickery: once you’ve seen mechanics once she’ll start stopping time as she does her directional AoEs, meaning everyone wants to be spread out or risk being frozen in the blasts, and she’ll also confuse you and cause you to see everything as Sandy — including your allies, and definitely including the Berserk orbs. Mostly, though? Make sure you’re all standing away from each other and quickly figure out which one the real Sandy is, because that’s your safe spot.

And then we get to Cindy, and things go nuts. In a lovely and/or painful throwback to Final Fantasy IV, Endwalker’s Magus Sisters come together as one for this fight, and Cindy must be killed first or she’ll resurrect her sisters.

The battle against the three Magus Sisters is a fairly heavy heal check. Sandy will hang out doing her directional AoEs while Mindy pummels the entire party with undispellable damage-over-time debuffs… and then they’ll do Delta Attack, and everything transitions into AoE hell. You’ll be dodging pretty much every AoE from the previous encounters (along with a few more) at once, with safe spots appearing and disappearing all over the arena while everyone’s targeted with yet more AoEs. It’s absolute glorious chaos, and beating it actually felt like a triumph. This isn’t “deal with a stack marker.” This is “deal with a stack marker while lightning rakes the arena and there’s only one safe spot and conal AoEs are going off everywhere.” I can’t wait to rage-heal this. 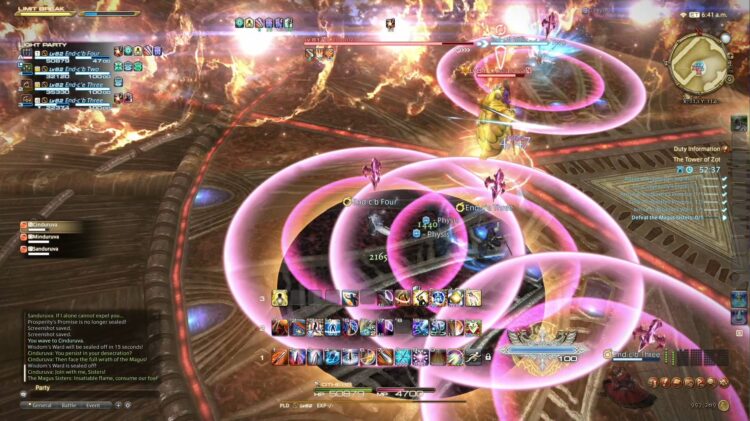 Again, I have no idea how much tuning is still being done on this, or whether the dungeon was adjusted for the press tour. I’m used to waltzing through most required dungeons without a wipe, even as fresh content. But the Tower of Zot? On my main jobs I could squeeze through it while effectively sight-reading it, but with any job unfamiliarity (hello, Sage), then problems compounded and things rapidly escalated out of control.

My thoughts, then, are threefold. First: I love it. It’s so genuinely pleasant having an actual challenge in a progression dungeon, with a lot of mechanics to worry about — although as with anything, they’re simpler on repeated plays when you’re used to them. Second, if this is anything close to the final tuning, I kinda fear playing it with randoms because deaths and wipes will happen. And third, I actually hope it’s not retuned. I can’t remember the last time I had to focus this much during a dungeon, and if you’ve made it up to level 81 without skipping content or being 100% carried, I daresay you’re capable of handling what the dungeon throws at you. It’s satisfying in a way I haven’t felt from regular difficulty content in quite some time.

By A.K Rahming1 min ago
Features