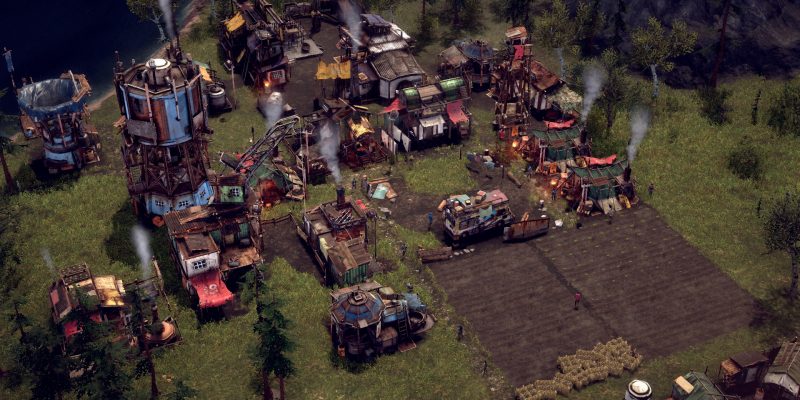 You know what we need? An honest-to-God Mad Max post-apocalyptic city builder, where waterworks are as important as the Fight Pit. However, not all devs think that way, so that’s why we get Endzone: A World Apart, in which rebuilding humanity after the fall takes a more civilized bend.

I bet you’d like to know what an Endzone is. Well, it’s something you won’t deal with too often for a game named after it. An Endzone is an underground bunker housing survivors of the collapse – a Vault, if you will. However, nobody wants to stay cooped up and breathing refiltered farts for too long. The survivors mosey out while the world is still plagued by radioactive rain and devastating sandstorms. As the genre-standard disembodied mayor in the sky, it’s up to you to keep a settlement running despite these natural-ish disasters.

Look, Endzone: A World Apart is a game that takes very much after Frostpunk, but less as a sibling, and more like a less glamorous third cousin. Instead of a marvelous reactor core being the beating heart of your settlement, you’ll have a broken-down camper van as the town center. Now get to building!

Building around your humble beginnings

The poor souls under your command want what any human wants: not to die. To facilitate this desire, you’ll have to put food in their stomachs, quench their thirst, raise a roof over their heads, procure medication to cure what ails them (usually nondescriptivitis), and wrap them in layers of insulation from radiation. It would be superb if you could find the time to collect all the corpses, maybe establish a place for the live ones to gather as well, and probably even build a watering hole where the humble H20 is fortified with a couple more Cs and four additional Hs. 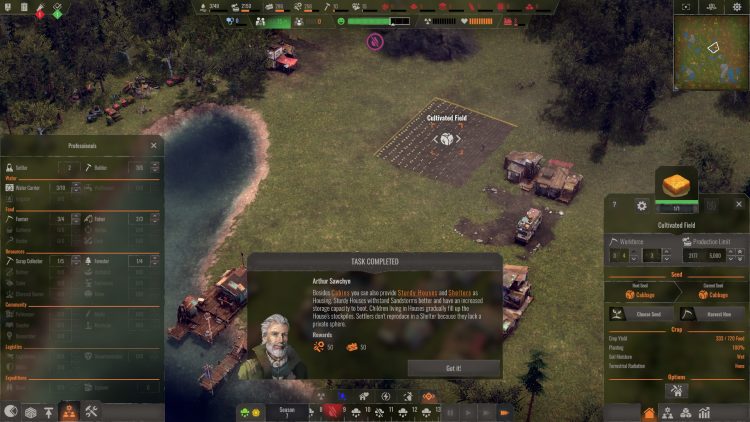 The game posits that settlers wouldn’t reproduce in your shantytowns due to lack of privacy, which goes entirely against what we know about the urge to, ugh, scratch that particular itch.

But what you start with is about a dozen adults, half as many children (who will soon mature into useful adults – Endzone: A World Apart has aging in it), and the broken-down camper van that has some resources to keep you going. Obviously, what you want to do first is slap a jetty down at the nearest lake, build a cistern close by, and then assign some of your citizens to be water carriers. With that out of the way, you might want to start thinking about more sophisticated resource chains.

This is where Endzone: A World Apart dares to break away from the usual milieu in that even the populace that isn’t press-ganged into dirt farming can be used in resource extraction. You can set tasks, designating areas where free hands will be used to gather some type of resource (or all of them, that’s an option). This means that you have some leeway when it comes to early resource crunches. Sure, you might not have the scrap to build a scrapyard right now, or maybe your old one was knocked down by a sandstorm or raiders, but don’t worry! It’s not a death spiral as long as there are scrap piles small enough to be picked through by hand.

And believe me, in Endzone: A World Apart, scrap might as well be the spice mélange. It does not allow space travel, nor does it expand consciousness, but it’s useful both as a building material and as a precursor to several others. To be precise, scrap goes into recycler huts to be transformed into either cloth, metal, plastic, or (with some research), electronics.

And you absolutely want your recycling up fast, because cloth is used in every sort of protective gear, from the humble cloth mask to activated carbon masks and to radiation suits. Radiation is an ever-present danger and annoyance in Endzone, so personal protection at least keeps your post-apocalyptic pioneers from soaking it up in their spare time. 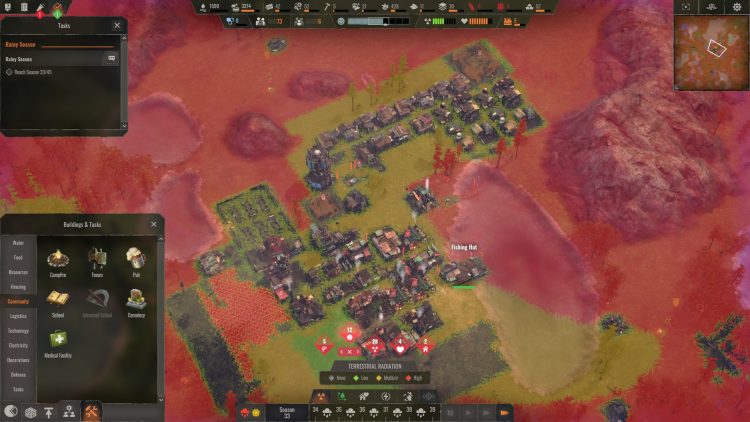 This is what scientific literature describes as “a bad time.”

Luckily for us, the other super important filtration component – charcoal – is a lot easier to obtain. Trees are literally everywhere, your foresters replant trees as trivially as they cut them down, and wood isn’t the source of four different other materials. Charcoal itself is basically used in making protective clothing, decontamination kits (it’s how you make your food stop glowing in the dark), and filters in water towers. It’s a lot less troublesome than other industries, and a lot easier to scale when need be.

Managing both your expectations and turnip production

You may have an occasional hiccup in food and water production, but only the production of the former is in any way involved. Your first meals will all smell of fish, because it’s so easy to plonk down a fisherman’s hut next to the water harvesting jetty, and it starts cranking out produce immediately. But then you have farms and orchards – which rely on water just like fishing, but also take time to grow. They also saddle you with choices of what to grow – different plants take different amounts of time to mature, plus, wheat is useful in making bread of the liquid variety. You also have gatherers that go rooting for shrooms and berries into the woods, and pastures that rely on your hunters to capture animals to keep. Some of those animals can even provide resources other than meat. 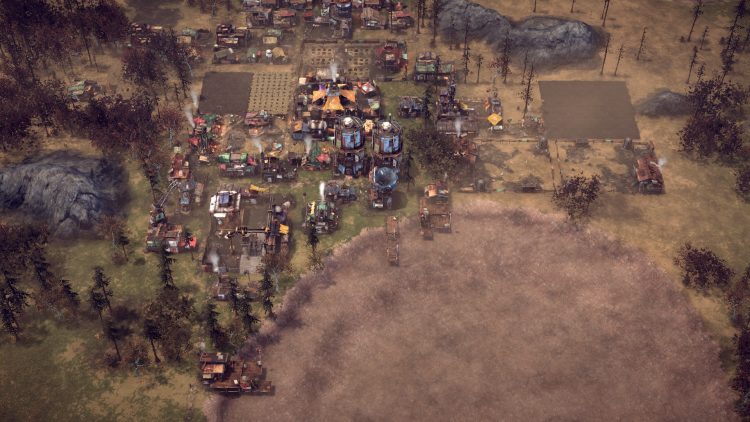 Droughts are an another reoccurring disaster, but they don’t last too long, and you should be OK even without having less water-reliant food sources if you have a decent stockpile.

Oh, and before you try to optimize yourself into a monoculture, Endzone reminds you that citizens need to eat a good variety of food, or else they’ll be struck by an epidemic of nondescriptivitis.

As I mentioned, you have some leeway with your starting build order, but not too much. What’s more, you’re rushed, almost at gunpoint, to generate enough resources to be able to sink them into research. Without doing costly research, you can’t even access certain areas of the game like the weather station, which both predicts how radioactive incoming rains will be and allows you to set food and water production policy according to radioactivity. Do you want to enjoy the wonders of electrification? That’s at least two research techs and a research tier away.

And this is how I transition seamlessly into probably the most interesting aspect of Endzone: A World Apart: expeditions. Once you have an expedition center ready, you can employ people as scouts. These guys will go to interesting ruins (all on the same map as you are) and tell you what’s there. Then you can mount an expedition by collecting a group of citizens to explore it in a more thorough way. 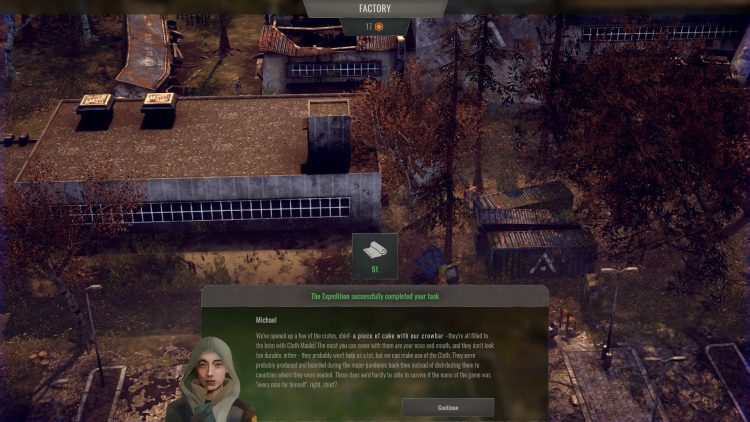 The game delivers topical social commentary with a hand encased in iron.

Expeditions are fun, as they can have many and varied requirements to pull off successfully like “have young people aboard” or “everyone should wear radsuits.” You can ignore these, but then your odds of getting the best result in the short, nearly text adventure-esque quests decreases significantly. Another cool thing is that expeditions aren’t one and done: you can return to collect any loot left behind or to complete challenges you weren’t ready for the first time around.

A bit less exciting of a development are the raider attacks. In Endzone: A World Apart, the post-apocalyptic bandits are nice enough to give you a call before attacking. You even have a choice: pay a tribute, or get rekt. There are several bandit personalities, and they want different things. But failure to pay only ever has one outcome: a band of hoodlums will raid your settlement, stealing resources and knocking down buildings. I hope you’ve researched the ability to defend yourself and place your tower defense-esque fortifications appropriately!

The less exciting aspects of surviving the fall

That’s certainly something I don’t remember seeing in Frostpunk. But you know what I do recall? The political management of the settlement via edicts and the two different paths they can take you. In Endzone: A World Apart, you can declare edicts once you build a forum, but they only last some time and aren’t as dramatically expressed. It’s also a place where you can pick and choose missions for your citizens to accept. Without a forum, you’ll only get missions at plot-related or crisis-mandated points. It’s funny, solving the issue of water shortage and being rewarded with more water. Wonder where they kept that – and why did they not share. 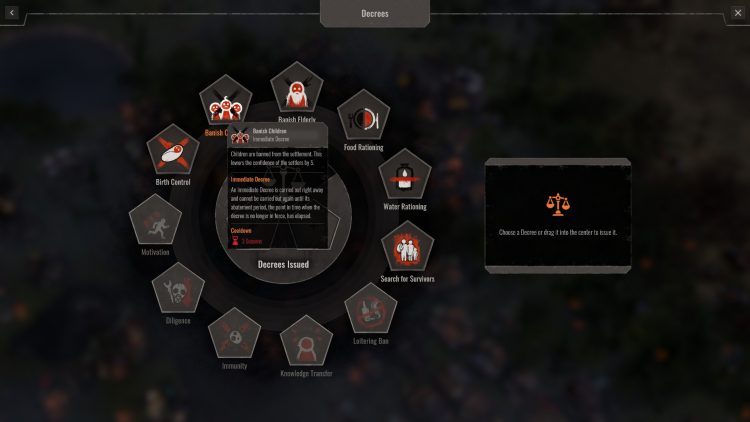 Everything I’ve expressed so far will be learned during the tutorial, which is like a fast playthrough of the entire settlement development cycle. It prepares you for the free-form survival mode and scenarios. Scenarios, however, are blatantly meant to test your skill in specific areas, like saving a settlement of incompetent goobers from a crisis of their own making, managing water, or fending off aggressive raids. Too bad none of them have the impact of the first Frostpunk scenario – and you’ll have seen most of the content you can expect during the tutorial.

This sure looks like the end of the world

Wearing towards the more technical side of things, Endzone: A World Apart isn’t the prettiest game out there, but it has its moments. Notably, you can tell the rate of protective gear adoption simply by looking at your population’s portraits. Or when you start issuing rad suits, based on the way they look in the field. Unfortunately, the portraits and the dialogue that often comes with them during the events could both use some work. 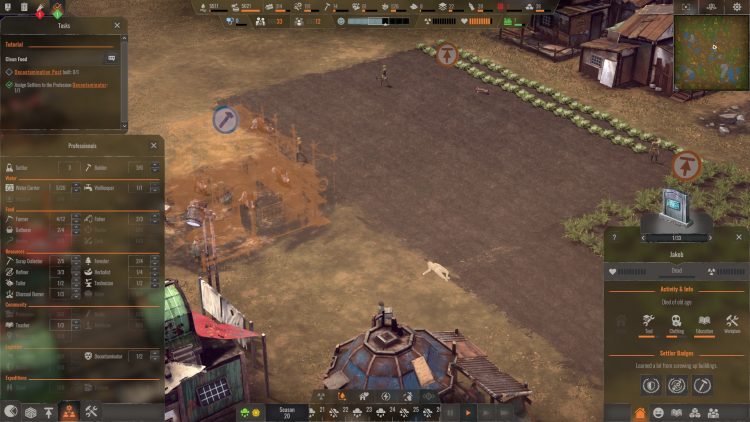 “Here lies Jakub, maker and creator of the devil, swine merchant. His time was finally at hand”

However, in games like Endzone: A World Apart, audio matters more than zoomed-in visuals. Why? Because you don’t have the time or a reason to be zoomed in. None of these games give a compelling reason to run them at speeds other than the fastest one available. When it’s not a crisis situation, stuff develops slowly enough that you can’t be bothered to wait it out in real-time. And when something goes down – well, you have the pause button for a reason.

All in all, Endzone: A World Apart is certainly an interesting game. It has its own charming elements to set it apart from the pack – the expeditions, the protective gear representation – but, it’s certainly lacking in staying power. It’s kind of hard to maintain interest when the tutorial takes you through most of what you can see in the game. Most scenarios also make you start with the boring first step no matter the premise.

Dogworld review — Black and white and red all over

By Michael Feghali8 hours ago
Reviews