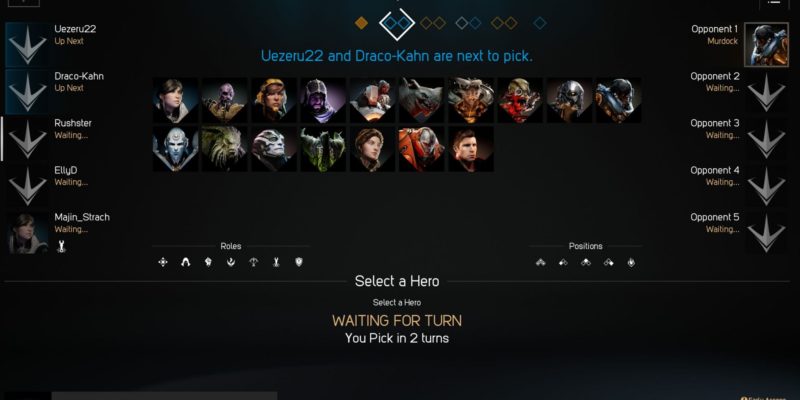 Sorry. Someone else is playing your favourite hero. Let's screw over the whole team.

Despite the Paragon v27 changes being less than enjoyable, I have persevered to see if I am missing something. Sadly I am not. I talked about the draft system in my recent article and today Epic has revealed the penalties applied to players and they are just bizarre.

When in the draft, if a player doesn’t pick a hero, all players are kicked out and a new queue has to be entered. I was starting to wonder why it was taking so long to find matches after failed drafts. Here’s why.

If a player fails to pick, ALL players who were in the draft lobby are penalised, not just the player that failed to pick. The penalties are as follows:

So even if  you have picked a hero and another player failed to pick, you would get penalised for the above times. This is just insane because this is happening a lot because players can’t play the hero they want. Epic explains why it’s like this:

“We implemented it this way to avoid scenarios where players can dodge unfavorable comps with a ‘back up’ player or account that is not penalized and can hop in. While this may not happen all the time, we wanted to go forward with the design to reduce dodged lobbies and provide more matches for players.

“Our goal with implementing the Draft Lobby was to assist players in coordinating team compositions, there is an understanding that people may still be inclined to leave lobby maybe for malicious reasons or not. I am happy to explicitly state our penalty times, we will be releasing a more comprehensive blog post regarding our tools for dealing with AFK/Leavers/Toxicity in the future. The initial dodge will prompt players with a warning and then the penalties that are listed below will follow with each additional dodge.”

It is getting to the point that it’s not even worth attempting to find a match just in case some idiot pulls out of the draft. All in all, I have spent about 30+minutes trying to even get into a draft this evening. When I eventually did get in one of the team abandoned the game after 20 minutes even though we were winning. If Epic want to deal with Toxicity then perhaps address this now because it’s making the game rather toxic.

The free Paragon beta weekend is about to start and I have feeling there’s going to be a lot of frustrated players that simply won’t give Paragon a second chance. It’s a shame, the game was shaping up so well until v27.

Update: Epic got in touch to make sure everyone is clear on how this is working and wanted to share the following:

“This is only correct for players who are in a party; “random” players paired with a player who leaves will not be affected. This shouldn’t have an impact on a player unless someone they know makes the decision to bail.”

I will point out that while testing this last night, this appeared not to be the case. I appeared to have been penalised for five minutes while not in a party so perhaps the system is a little off at the moment.

Gabe Newell says VR exclusives are not a “good idea”