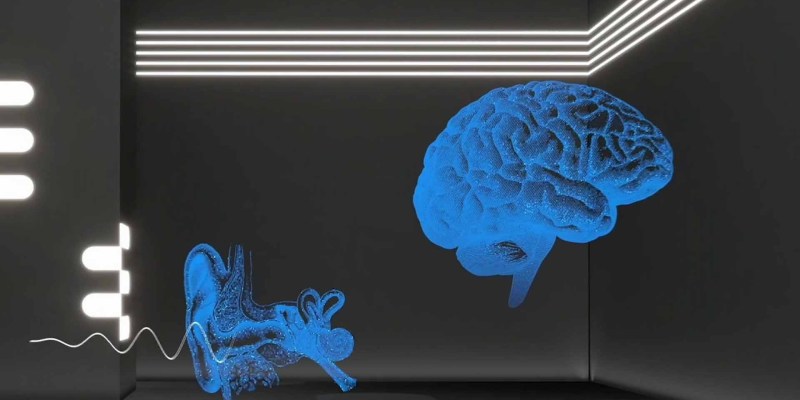 Gaming audio is often overshadowed by high-end graphics with innovations such as real-time ray tracing. However, sound can be the one element that brings a truer sense of immersion to an experience. For instance, try playing a game with the sound turned off. Sound design and music can be critical when setting the pace for game levels, putting you in the middle of fantastic worlds, and help you make sense of all the chaos that’s happening around you. Or, as EPOS president, Jeppe Dalber-Larsen, said at the recent virtual event called The Power of Audio in Gaming: “…audio completes the gaming experience. Games are the most powerful, immersive types of entertainment we can imagine. Superior audio can actually lift your mind off your shoulders and into a new world.”

The Danish audio company EPOS, previously Sennheiser Communications, grew out of a joint venture between Sennheiser and the technology group Demant. Today, it makes a wide range of audio equipment with a division that specializes in gaming. It mostly makes high-end gaming headsets and a few external sound cards, with its most recent announcement being a pair of wireless gaming earbuds. Its goal is to develop high-performance gaming equipment, and the company revealed what it takes to engineer immersive experiences. EPOS include engineering decisions such as ear cups that are kind of shaped like ears, but that’s just a part of the bigger picture. It turns out, the secret to delivering a deep gaming audio experience is to tap into people’s brains.

Amazing audio is all in your mind

EPOS vice president of research and development, Jesper Kock, explained that superior audio is comprised of four elements: natural sound, gaming sound without disturbance, communication without disturbance, spatial orientation, and the perfect fit of the headset. All these parts seem pretty straightforward. You don’t want audio to sound artificial unless it’s part of the experience. On top of that, external sound from your real-world environment can pull you out of the game. Then there’s clear communication with teammates if you’re playing a multiplayer game. Spatial orientation from virtual surround sound technology heightens the sense of immersion by providing highly detailed positional audio. Lastly, having a well-fitting headset has obvious benefits, but is considerably more complicated than it might sound. 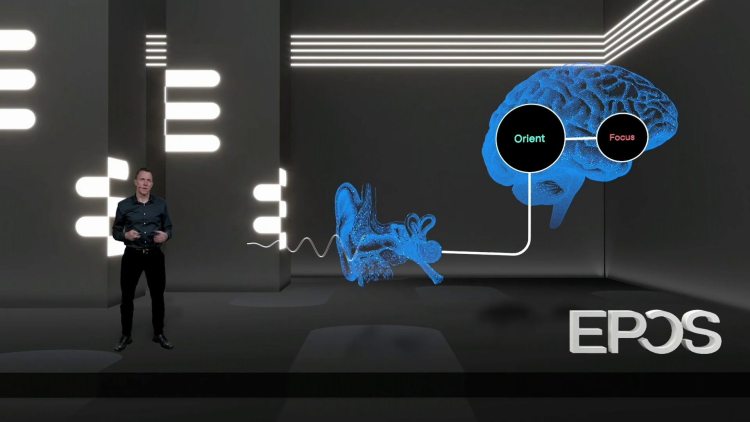 You hear with your brain.

However, it turns out there’s much more to it than having a pair of decent-sounding headphones. Audio research at Demant and universities show that high-fidelity sound requires both a good set of ears and an “acoustically competent brain.” As Kock explains, sound is converted into electrical signals that are sent to the auditory cortex. Each sound has a distinct voltage, and patterns of these voltages make up the neural code that the brain interprets for orientation and focus. Therefore, it’s the brain that distinguishes between game sounds and communications, meaning “you don’t hear with your ears, you hear with your brain.”

For example, it wouldn’t be uncommon to hear nature sounds, mixed with gunshots, swordfights, dialogue, and footsteps all at once in games. The clearer the sounds are, the easier it will be for the brain to focus on important ones like footsteps. There’s a long list of reasons why sound wouldn’t come through clearly for the brain processes to work efficiently. They include bad spatial reproduction and frequency response, distortion, disturbing noises, and a bad headset fit. So, the job of an audio company like EPOS is to design headsets that overcome all those negative factors.

The shape of your ear

With Sony’s Tempest 3D audio technology on the PlayStation 5 getting so much praise, there’s little wonder why audio technology is getting a lot of attention recently. This is compounded by competitive gaming, which is currently the primary driver of headset sales. Players need to hear and communicate clearly, and that high-end technology is also setting the bar for single-player experiences. However, Tempest was famously developed by putting microphones in people’s ears and playing sounds at them from a 22-speaker array as the person was rotated to get a clear sense of HRTF (Head-related Transfer Function). This is impacted by the head, shoulder, and ear shapes. 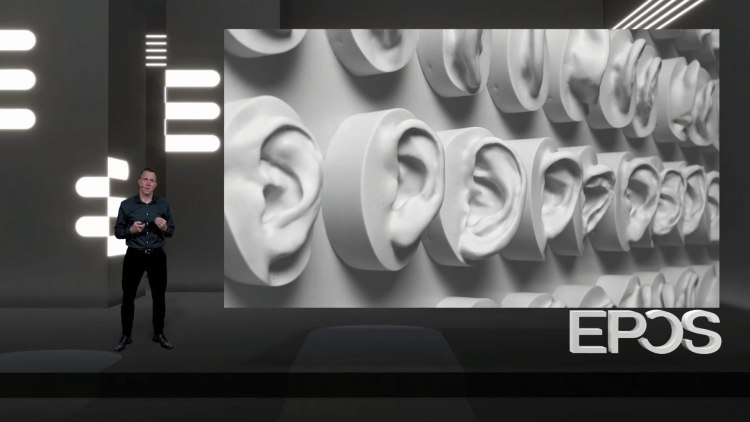 A near-infinite variety of ear shapes and sizes.

Although EPOS probably didn’t stick hundreds of people into a giant sound chamber, it did do the next best thing. The company took advantage of its partnership with Demant, which happens to be one of the largest hearing aid makers in the world, and tapped into its vast database of ear scans to develop its headsets and earbuds. In doing so, it discovered that the outer ear is comprised of three zones: flexible areas that are susceptible to pressure, neutral areas sensitive to pointy pressure, and non-flexible areas that can’t endure pressure. By avoiding contact with the non-flexible areas or the outer ear altogether, you can have a headset that minimizes audio leakage while staying comfortable during hours-long gaming sessions.

Surprisingly, EPOS found that it didn’t need to use multiple speakers to create a deep surround sound experience. Given that the human head has only two audio receptors, it makes sense to use software to shape the left and right channels to simulate spatial orientation. In addition to high-fidelity game audio, players also demand clear communication with teammates, which means quality microphones with effective background noise cancellation.

The future of gaming audio

As for where audio technology is headed, EPOS revealed that its next-generation headset will include Bluetooth connectivity with active noise cancellation to help isolate gaming experiences from outside interference. It can even be worn casually outside. The upcoming headset, which is expected to launch sometime in 2021, will also include a specially designed detachable microphone that doesn’t rely on a 3.5 mm audio jack that can be worn out over time. Instead, it uses a yet-to-be-announced technology that can withstand long-term wear and tear. That’s in addition to keeping EPOS’s unique design while upgrading the earcup material for increased comfort. 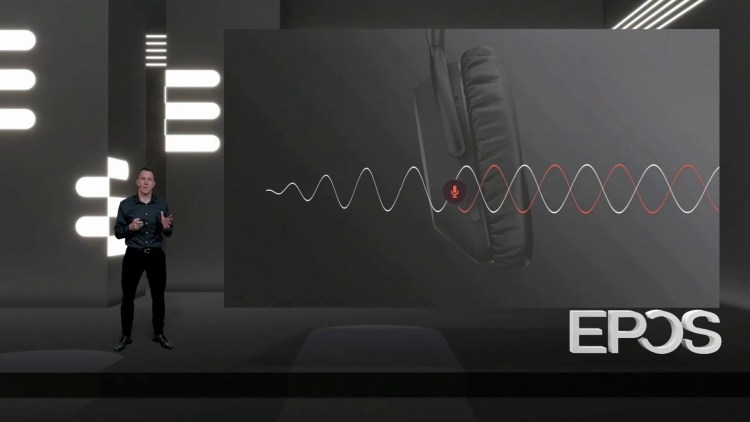 EPOS is also developing a cylindrical broadcast microphone for live streamers and content creators. Andreas Jessen, the senior director of gaming at EPOS, described the device as being a sort of stand-in for having an audio engineer nearby with a mixing deck to create a high-quality production. Little else is known about this live streaming microphone other than it will feature a fairly minimal design aesthetic and that it will come with a table stand. However, Jessen also showed that it can be mounted on a microphone boom arm.

Jessen also discussed how the company developed external sound cards to help ensure that users were getting the best possible sound quality from their headsets. Otherwise, you’re just listening to low-quality audio from high-quality headphones. So, it’s likely that EPOS will put a focus on integrating that component as it is already doing with its wireless headset and earbuds. Also, given the attention Tempest 3D has gotten, it’s almost a given that spatial audio technology that’s inspired by it will someday make its way to PC games. As the quality and level of detail in games increases, it will put more demands on the hardware, which will require more innovations.

In the meantime, audio design experts agreed that sound design would continue to gain prominence in video game development. Sound directors and designers may work more closely with game designers during the development process. They might also over-engineer experiences as some did when creating 7.1 surround sound mixes for a small subset of players before the equipment became more broadly available.

Whatever is in store for the future, we can be sure that high-quality audio will immerse players in fantastical worlds, enhance the narrative and emotion, and impact the gameplay in both subtle and overt ways.

You can watch the full “The Power of Audio in Gaming” presentation from EPOS here: