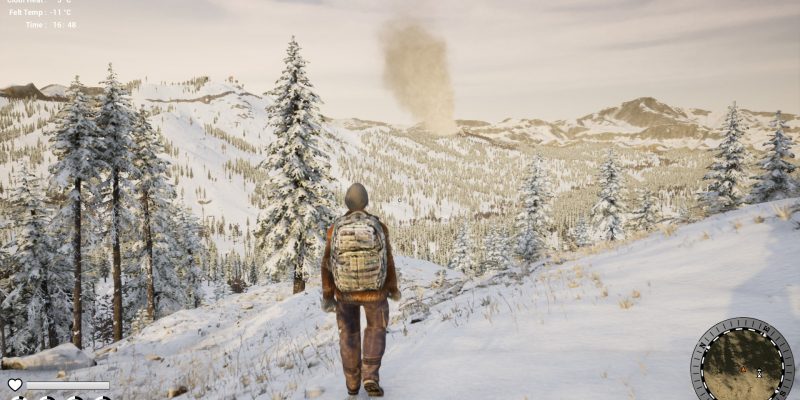 The Long Dark sure is great, isn’t it? It’s so great that there’s a fairly blatant knockoff already called Erzurum. From the general mechanics, to the theme, and even the survival icons, everything about this game screams its inspirations. However, it does have some notable differences and the like that some might be interested in, so the question stands: is it worth it?

Erzurum lets you play the story mode or sandbox mode. They both take place on the same map, only the story mode has, uh, a story. In it, your character is identified as Tayran, and the surrounding area has been hit with a meteorite that leads to the denizens being evacuated by the military. As Tayran, you need to try and figure out what’s going on and make it out alive. But that’s easier said than done. It’s cold as shit outside, and he’s got survival meters to take care of. There’s no voice acting or anything, only a black bar with text on it at the bottom of the screen when something happens.

The way the story mode works is simple: a question mark pops up on the map and then you walk towards it until you get there. Each question mark usually takes you to a shack or small building that has supplies in it, plus a stove and bed. The game itself is Turkish, but the text is all in perfectly understandable English. I didn’t get very far in the story because, at one point, bears spawn on top of you and kill you in one hit. You’re supposed to fight them, so the game gave me a shotgun. But I couldn’t equip it because it needed to be cleaned and I didn’t find a cleaning kit anywhere. The bears literally drop out of the sky too. 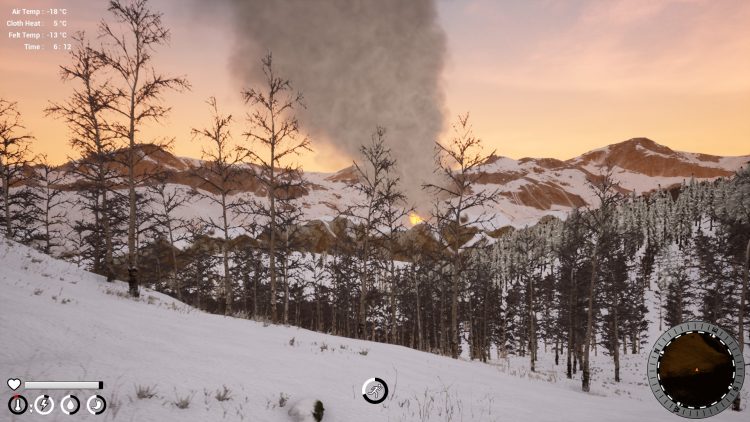 If you’ve played The Long Dark, then you know exactly how to play Erzurum. There are four gauges — body temperature, energy, hunger, and thirst — and they all deplete with time. You’ll need to find food and drink, plus sleep and warm yourself by a stove to refill the gauges. If you don’t, you lose health until you die. You can also gather supplies after finding the appropriate tools, such as a hatchet for cutting logs into wood. There’s cooking too as long as you have the correct cooking implements and ingredients.

Erzurum actually looks fairly decent for something that was made by such a small team, and most of it is perfectly functional. But the map is horribly dull. It’s a mostly empty snowy forest with the occasional small building to go into. Almost all of it looks the same, and walking across it is slow and boring. It copies The Long Dark‘s mechanics, but offers none of its variety or level design. The only unique thing it does do is include interesting splashes of Turkish character. Interiors have colorful, detailed paintings and blankets that are local to the region. You can even cook some Turkish dishes, which is neat.

But that tiny amount of culture can’t come close to overcoming the blatant copycat nature of the game. It’s functional, but never fun. It’s often tedious and has all of the crummier parts of The Long Dark without any of the good stuff, even if seeing a roaring fire light up a gorgeous Turkish painting in the wee hours is a pleasant sight. The game simply isn’t worth it unless you’re dying for a clone of your favorite game or are looking for some Turkish representation. 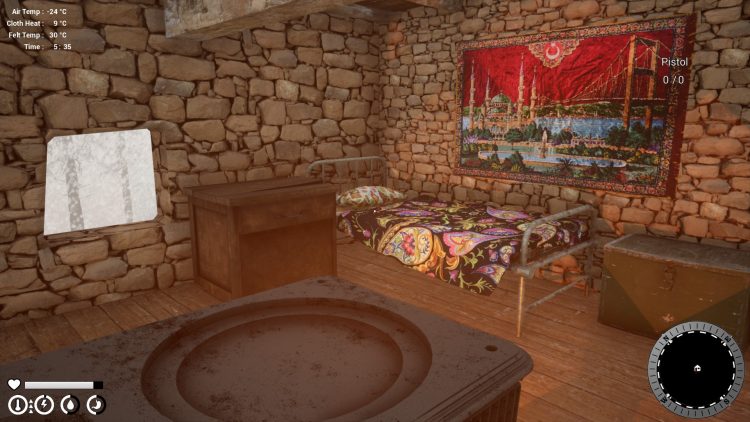