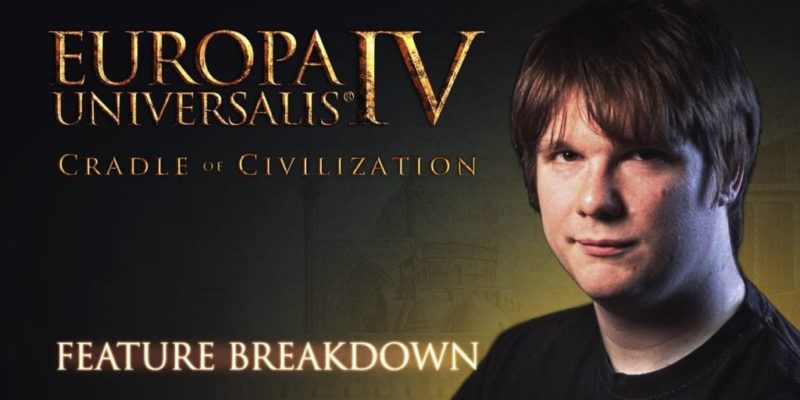 A pair of Paradox DLCs will be released on 16 November; ‘Cradle of Civilization’ for Europa Universalis IV, and ‘Jade Dragon’ for Crusader Kings 2. Cradle of Civilization has also received a feature overview video today, presented by EUIV game director Jake Leiper-Ritchie. Watch it with caution, because Jake’s camera stare is quite intense.

In short, Cradle of Civilization ($20) will add much greater depth and far more provinces to the Middle East region. Nations there will have “more flavourful mechanics,” and warfare has been given a spicy overhaul. Each Muslim nation will now follow one of the seven new schools of Islam added to the game by the expansion. Governments in the region have unique interactions, too; Mamluks, for example, have a new succession process.

There’s a lot more in the video, if you can withstand the penetrating gaze of Jake.

Jade Dragon ($15) doesn’t have a feature video (at least, not today), but it does have a text summary of what this DLC will add. You can read that below.

The Further East: A new “China Screen” lays out the status and desires of the Emperor of China, letting you keep tabs on what he wants and how to earn his grace
An Eventful History: Random events tip you off to major happenings in distant Cathay, letting you know when the Middle Kingdom might be shifting its center of gravity
Taoism: A Chinese religion that gives bonuses to stewardship, but spreads very slowly.
New Asian Tributary System: Submit to the Empire as a tributary, always keeping an eye on the waning power of the Emperor, so you can time your escape to freedom
Ambitious Adventurers: Disgruntled princes or curious adventurers may leave China to seek their own fortune to the west.
Amazing Riches: Collect wondrous new Chinese artifacts for your characters, and a new Silk Road system that adjusts returns based on China’s stability.
Chinese Characters: New Chinese and Tibetan portraits and Chinese units bring the empire to life
Eight New Casus Bellis: Fight!