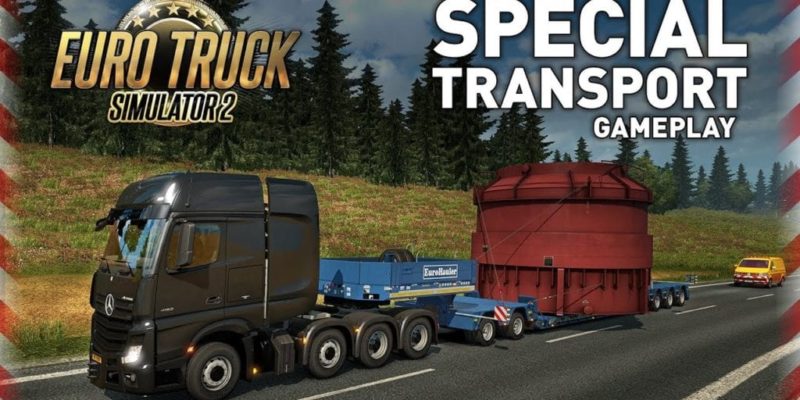 Euro Truck Simulator 2 fans who are looking for a new challenge will be pleased to hear that big cargo is coming in the Special Transport DLC.

When you’re driving along and flashing lights appear in your mirror along with escort cars you know something huge is coming. SCS are bringing their own take on transporting large loads to the game soon.

The DLC will come with a total of eleven new “special cargoes” weighing up to 70 tonnes. To carry the loads across 17 new routes (12 Base Map, 2 Scandinavia, 2 Going East!, 1 Vive la France !) there are four new trailers. All of this will be spread over eighty new special transport jobs and players will find themselves being escorted by custom AI which will help clear the path. The escort vehicles will stop traffic, give advice and help get other drivers out the way.

Strict regulations for transporting the large goods will be in play and will have to be adhered to otherwise the mission is a failure. New models, characters, and special intro are also being added for the new content.

SCS is not prepared to dish out a release date yet, but they are hinting that it could be out quite soon. Right now they are squashing bugs but the plan is to have the Euro Truck Simulator 2 DLC out before the end of the year.

PlayerUnknown’s Battlegrounds likely to be banned in China