This fifth expansion for the indomitable Europa Universalis IV is a dangerous one for those of us who are easily paralysed by indecision. If you often find yourself drifting around the game’s country selection screen, unable to decide what type of noble national quest to embark upon next, then El Dorado may only serve to prolong that process.

As well as beefing up the mechanics for the religions of Central and South America, and adding an entertaining Cities of Gold event chain for conquistador-inclined states, El Dorado allows players to create custom nations and engage in the glorious madness of a world painted in the colours of randomised factions. 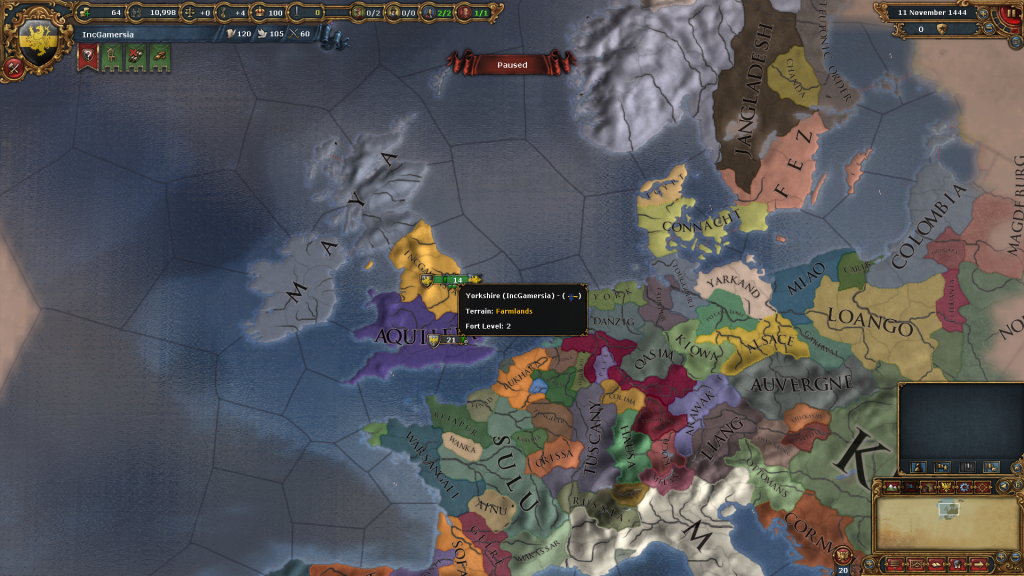 15th Century Europe is kind of weird in this dimension.

That level of customisation pretty much guarantees an infinite combination of unique Europa Universalis IV campaigns; and this in a game which already gives players more chances to screw up in charge of a nation than Italy gave Silvio Berlusconi.

If the thought of a custom nation creator already inspired a handful of batshit insane alt-history (or just outright ahistorical) scenarios inside your head-brain, then El Dorado will probably justify its existence on the basis of that option alone. There are, though, a couple of restrictions about which you should be aware.

The total number of custom nations in a given game tops out at 32, so unless you’re using the included “all provinces except custom nations start out uncolonised” option it’s not possible to redesign every single country in the world. That limit of 32 still allows you plenty of variety though, and each country has a “points” total of between 50 and 800 (depending on your difficulty level) to spend on provinces, ruler stats and the strength of their chosen ideas. 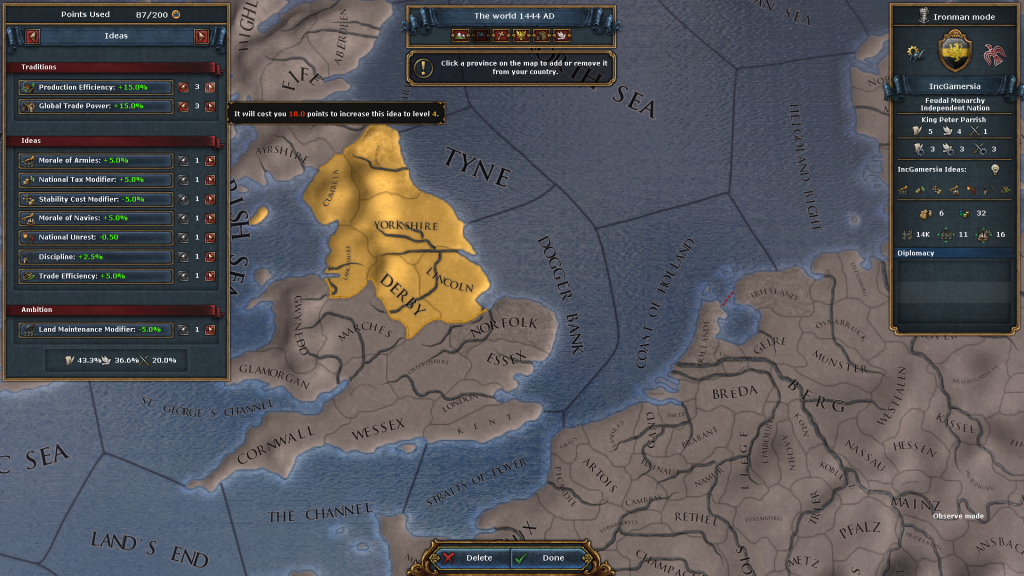 Founding what is undoubtedly the finest nation in history.

Opting to fill in the provincial blanks between your custom designed country (or countries) with randomised nations can produce some magnificently bizarre results, but this is tempered slightly by the lack of randomisation to religion and culture. I’d situated “IncGamersia” in Yorkshire and found myself bordering some Mayans. Despite being Mayan, they retained their Scottish culture and were devoted to the Pope.

Likewise, you’ll find everyone in North Africa is still Sunni, even if their country is labelled as France. The only way around this is to create enough custom nations with different religions and cultures to mix up the “historical” order. It’s more work, but it beats being the loneliest Norse nation in Europe surrounded by perma-Catholics.

Still, there’s enough flexibility for players to do their dream single player campaign as the lost nation of Atlantis, or (with a bit of fudging) set up some kind of weird alternative universe where the races from Warhammer fight it out on a more familiar globe, or just “fix” what’s wrong with your favourite existing nation. Within reason, it’s limited only by creativity.

Judging by this recent post, Paradox plan to keep expanding the scope of the custom nation tools. There may yet be a “randomise all the religions too” button. 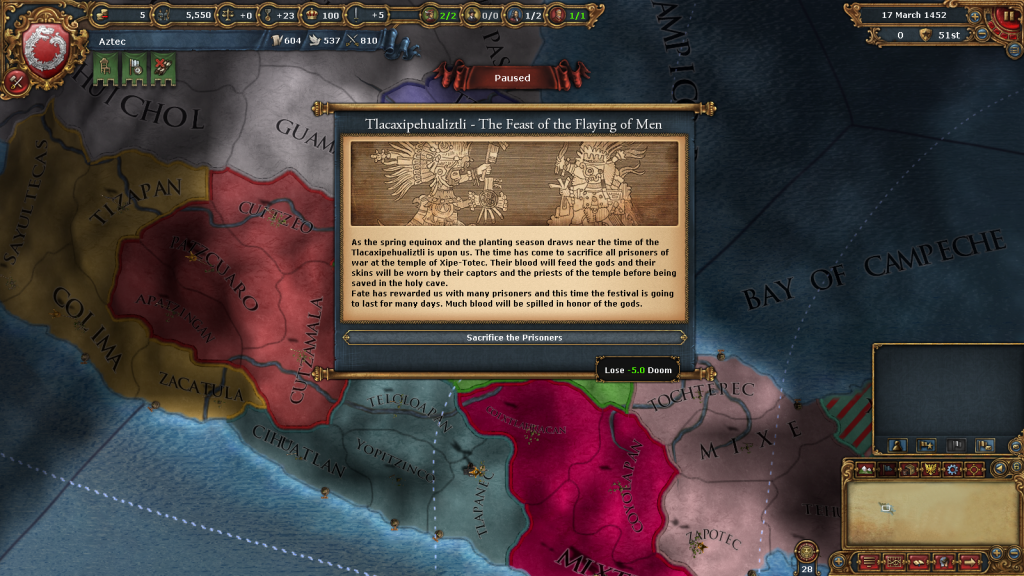 Hey guys I got your invitation, what kind of party is th … oh.

Customised games feel like the banner feature of El Dorado, but if that sort of thing isn’t the reason you play Europa Universalis IV this expansion has a couple more title-appropriate additions that may entice.

In a similar fashion to last year’s Conquest of Paradise, El Dorado adds new events and mechanics to the playable Central and South American nations like the Aztecs, Mayans and Inca (plus some of their less well known neighbours, if you fancy being them instead.) As with their indigenous North American counterparts, you could sum up these changes as “things to do while you wait for European nations to show up on the coast.”

Without expansions, the Western tech-and-diplomacy focus of Europa Universalis IV can leave the indigenous American nations with very little to do except fight some low-level wars and watch the monarchy points tick slowly upward. El Dorado addresses this by giving each of the three main religious groups (Nahuatl, Maya and Inti) their own distinct and engaging paths to reform.

As the Aztecs, for example, it’s necessary to stave off “Doom” (which, if high enough, will ruin your stability and force the blood sacrifice of your royal household) by fighting and subjugating neighbouring lands with the handy “Flower Wars” casus belli. Juggling the ‘correct’ number of vassels, fending off other Nahuatl nations and keeping a lid on your expansion is a tricky business. It can at times feel a bit like you’re just gaming the system rather than immersing yourself in a culture of blood sacrifice (especially when you’re intentionally leaving provinces unconquered,) but does offer a change to some of the more well-worn EUIV play styles. 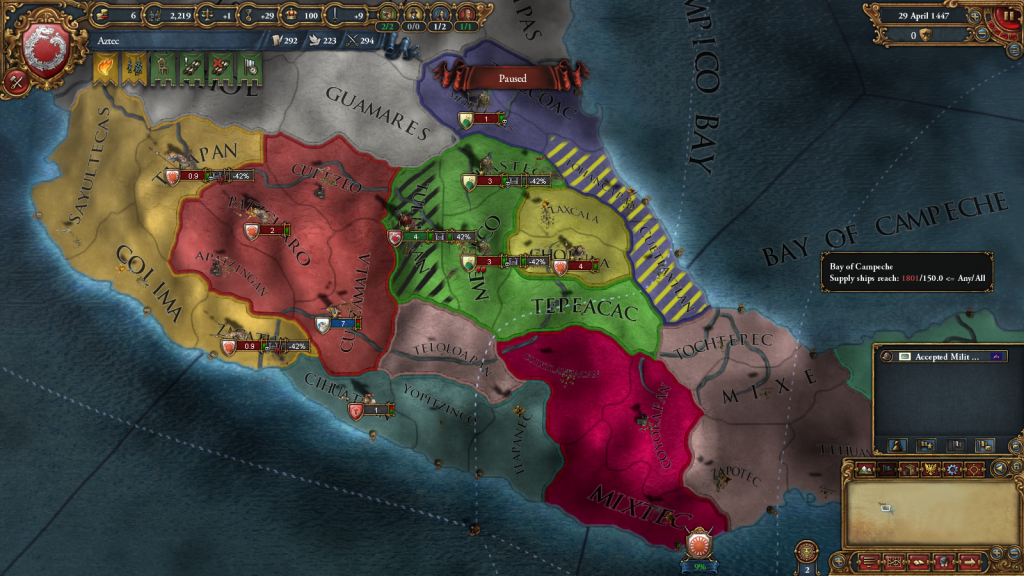 This is what is colloquially known as “fucking up.”

I spent less time with the Maya and Inti systems, which seem to (broadly) follow a similar path of struggling with their own internal foibles in order to pass reforms. With Maya, your country automatically discards a number of provinces with each reform, resulting a continual process of growth and (steadily decreasing) loss. The Inti just have a massive civil war each time, with the high-stakes prospect of having a couple of reforms reverted if the war is lost.

These additional mechanics probably don’t do enough to make these nations main-stays for repeat campaigns (unless you’re determined to get that incredibly daunting Sunset Invasion achievement,) but do make them viable options for a run or two before the novelty begins to fade.

For those players who prefer to approach the Americas from across the seas, El Dorado has changes to exploration and a bit more narrative flair for conquistadors. The latter can now lead expeditions for the fabled Cities of Gold, which effectively leaves them to auto-wander around the New World until entertaining events about inept navigation and tribal misfortune pop up. As well as providing a handy way for your conquistadors to uncover territory without being micro-managed, actually locating legendary places like the Fountain of Youth or the titular El Dorado will provide your nation with tremendous economic boosts.

Speaking of which, gold producing colonies will now send treasure fleets downstream (and only downstream) to trade nodes. Local privateers steal from these convoys, so having a fleet dedicated to hunting down pirates is necessary if you wish to keep all the spoils. 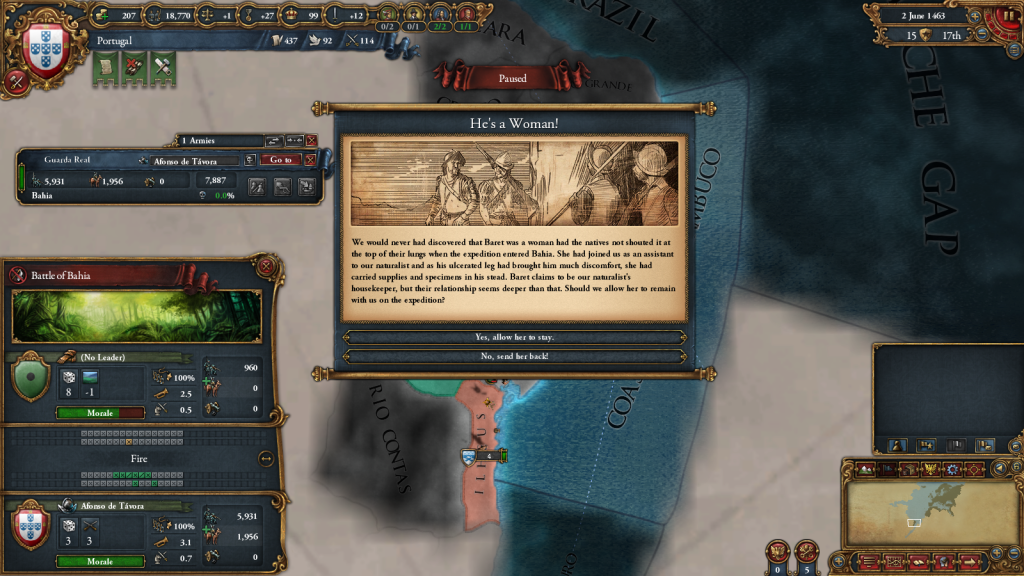 It would be nice if the new naval exploration system worked in such a neat, hands-off way as searching for the Cities of Gold, but unfortunately it doesn’t. Fleets above a certain size (and led by an explorer) can be given missions through a dedicated button. These tasks are sort of like manually exploring sea regions (which, thankfully, Paradox patched back in) except usually involve the fleet uncovering one area of the map and then immediately heading back to port. Which is fairly rubbish.

Aside from a few lengthy voyage options like “circumnavigate the globe” (only available at a pretty high tech level,) or charting coast-lines, fleet exploration missions seem to actually add micro-management to an area that really doesn’t need it. If your aim is just to beeline to the Americas, rushing the “Quest for the New World” idea and guiding your fleets with manual instructions still seems like the best way to go.

This moderate naval floundering doesn’t take the wind out of El Dorado’s sails though. Whether you consider it an essential add-on will largely depend upon how appealing you find the the idea of designing custom nations. Mechanics like the Aztec’s “Doom” provide enough novelty for a Central American campaign or two, and the addition of more narrative flavour to conquistador expeditions is welcome as well, but the chance to go all-out bizarro history within the Europa Universalis IV engine is the banner event here.