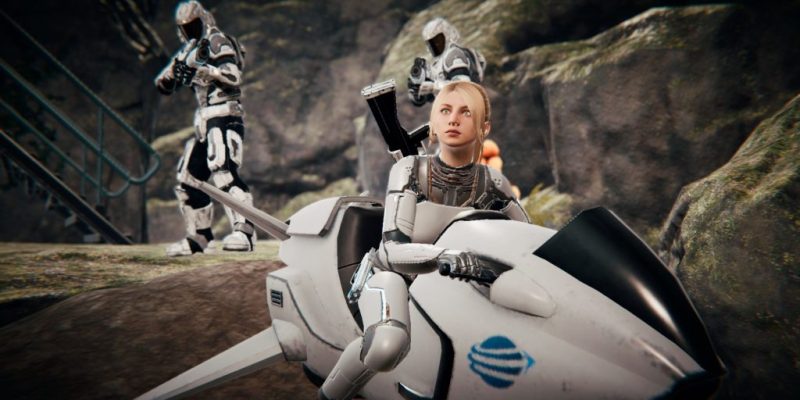 Everreach: Project Eden was originally supposed to be released at the end of September, only to get delayed for months. After the delay, I assumed that a polished product would be released. But to put it bluntly, Everreach: Project Eden doesn’t feel finished. Very little works as it should, and playing it is a dreary, obnoxious chore. I think the game could be just mediocre with several more months of polish, but as it is, it’s a frustrating mess that I can’t recommend to anyone.

Everreach: Project Eden places you in the shoes of Nora Harwood, the leader of a security squad for the Nova corporation. Outposts have been set up on the planet Eden, but a mutiny has broken out and the mutineers, calling themselves Eclipse, now threaten the entire operation. Naturally, you’re the only one who can throw a wrench in their schemes. 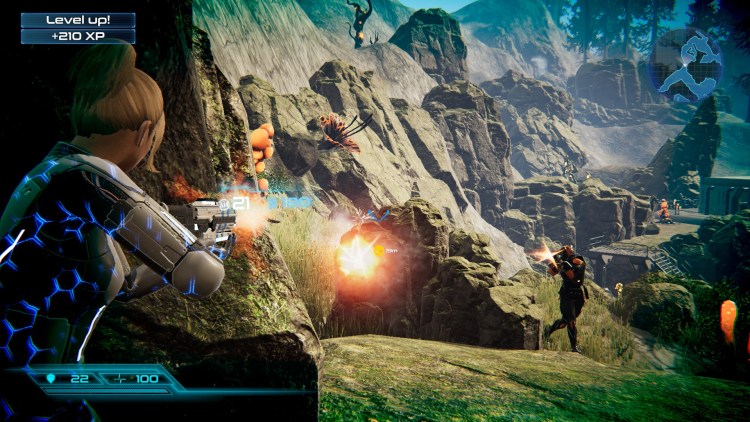 The dialogue itself is okay a lot of the time. It can be funny during some occasions, which it often tries very hard to be, and laughably poor at others. On the funny side, you’ve got a helper robot that follows you around and is somehow very, very stupid. And on the poor side, you’ve got a squadmate who starts an argument with Nora after she wakes up after being injured. He has massively messed up during an exercise and his excuse is that he has a lot on his mind and he was still fixated on their breakup. I felt my eyes roll into the back of my skull on that one.

What really caught my attention was how janky and weird the cutscenes are. There’s little-to-no eye for cinematography here — the lip-syncing is off, and the character animations are poor. On top of that, the voice acting generally misses its mark. Nora’s actress often seems unsure how to deliver her lines, which is unfortunate since she talks all the time.

As you may be able to infer already, Everreach: Project Eden is very interested in being like Mass Effect. You walk through levels and shoot enemy soldiers and robots while using abilities. You can choose between dialogue options at certain intervals and occasionally pick from ways to accomplish a given task. You also level up, gain skill points, and utilize a skill tree that makes Nora stronger and gives her new abilities. 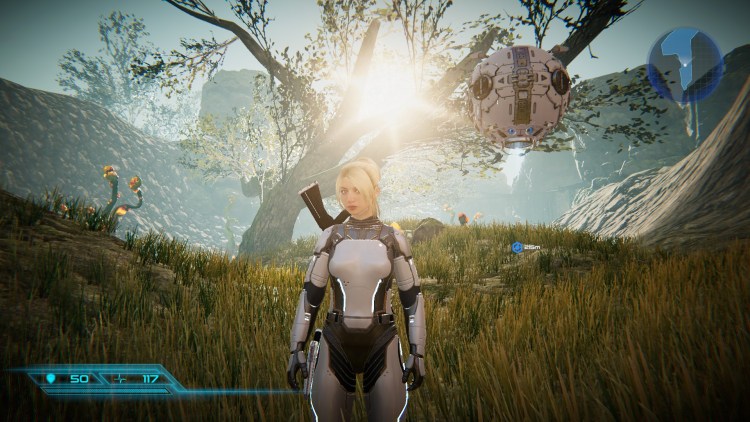 This is all fine on paper, but in practice, it’s often problematic. For starters, the shooting is awful. The guns are weightless and the hit detection is terrible. Sometimes it appears that you can headshot your enemies, but oftentimes I couldn’t do any extra damage by doing so. Enemies take cover sometimes but are more likely to just walk straight at you and try to tank the damage you do. This is often bad news for you, as enemies can generally kill you insanely quickly while they often just shrug off your attacks.

You can’t take cover, which is weird because there are lots of times where you really, really need to take cover. The enemy AI is extremely weird, as it often either knows where you are before it can see you, or it fails to detect you while you’re pumping rounds into their backs. Since they do such an insane amount of damage, I frequently had to try my best to cheese them instead of fighting them fairly. The best strategy is to find a spot standing behind an object where you can hit them but they can’t hit you, even though there’s clearly plenty of room for them to do so. If one of them is able to walk up to you, however, you’re basically just toast.

Unfortunately, you can’t save at any time and have to deal with Everreach: Project Eden‘s checkpoint system. These checkpoints aren’t too far back a lot of the time, but they still feel very dated. I can’t tell you how infuriating this game gets when you get down to the last enemy in an area and die, only to start the whole tedious section over again. 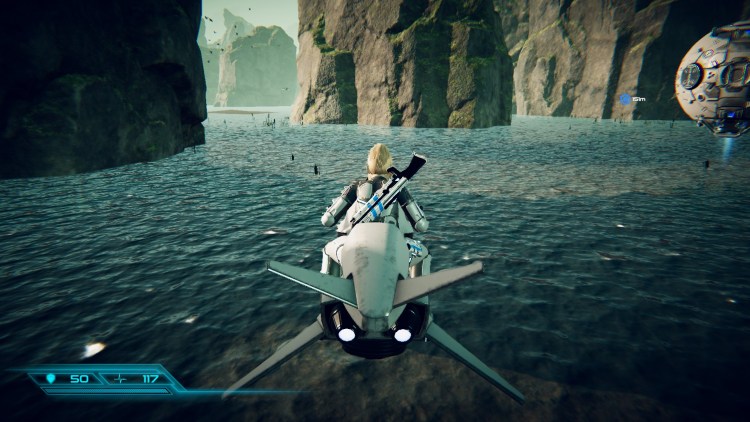 For instance, one section tasked me with killing foes on the ground before making my way up a tower. The enemies kill you super fast, so you have to go and wait to regenerate your health in cover. So you see them and either find a spot to safely shoot them from, or you try your best to trade fire while taking damage yourself and hoping they don’t kill you before you can kill them. They usually do, though, and the game is loaded with impractical fights like these with no cover.

The general flow of Everreach: Project Eden‘s levels is just walking through large-ish areas with very little to do while waiting for your stamina to slowly recharge so you can continue running to the next marker. There are also sections where you ride a hoverbike, but these are even worse than the normal shooting sections. The hoverbike controls horribly. You’ll occasionally stumble upon enemies while riding it. If the enemies are robots, you’re allowed to fire homing attacks at them. If they’re human you just have to drive as fast as you can while hoping they don’t kill you. 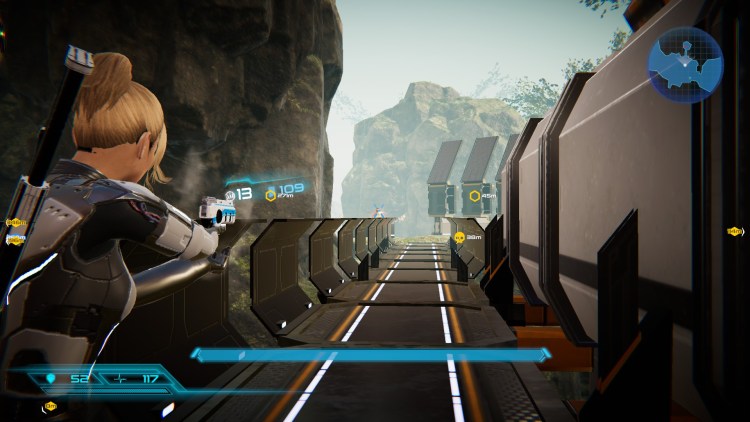 But you take a huge amount of damage if you bump the bike into anything. And the game likes to put you in locations that the bike doesn’t really get along with. Going uphill in a cramped area and trying your best to awkwardly steer this monstrosity is an awful experience that I wouldn’t wish on anyone. You’ll also race on the bike trying to dodge cannon fire from an overhead enemy. If a single shot hits you, you explode and have to start the section over from the beginning.

Leveling up in Everreach: Project Eden isn’t very useful a lot of the time. It gives you a minute bonus to your health, shield, or stamina pools and is mostly used to unlock more upgrades in the skill tree. You unlock these by using resources you find in crates. Some of these crates are locked with annoying minigames. One has you moving a block out of the way of other blocks without getting hit for 30 seconds. If you fail this one, you can retry it. The other, though, has you connecting lines in a timed minigame. If you run out of time, the crate locks and you can never try again.

Now, there are abilities that you can use. The one I had the highest hopes for was the forcefield. I used up most of my resources trying to unlock this and powered it up in the hopes that it would make the insane amount of damage enemies do more bearable. Then I watched in horror as the forcefield lasted about as long as my useless shield. It disintegrated almost instantly under enemy fire. 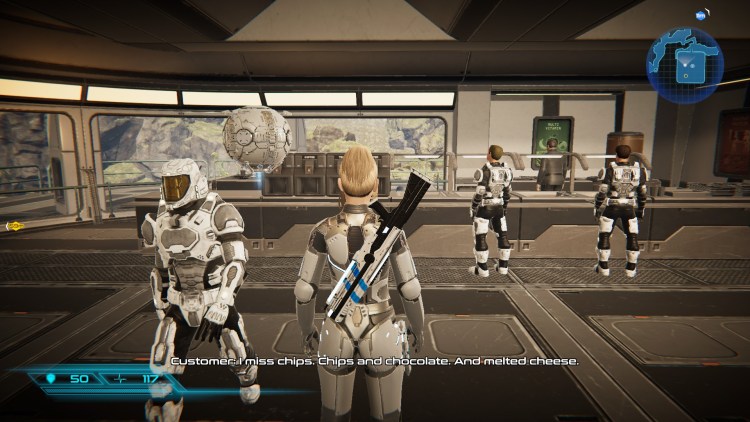 Can’t see the forest for the trees

I was really hoping that Everreach: Project Eden would be at least okay. Early on, I felt it was just mediocre, before sinking deeper into the mire of bad design that it represents. At its best, the game is functional. But it trips over its own feet so often and is just a generally awful experience with very little to offer. Even if you want to do something as simple as look at the controls, you have to exit out to the menu, since you can’t rebind them or change the graphics settings while in-game.

I would certainly like to see the game improve in subsequent patches. The most egregious issue that really ruined it for me is simply enemy placement and the insane amount of damage you receive. If those are fixed along with the bizarre AI issues and the wonky hit detection, this game would be much more tolerable. As it stands now, though, make sure you avoid this game like the plague. This is one rotten apple you don’t want to take a bite out of.

This game fails at almost everything it sets out to do. With janky animations, embarrassing story, awful combat mechanics, and horrible enemy layouts and AI, there's just not much positive to say about it.