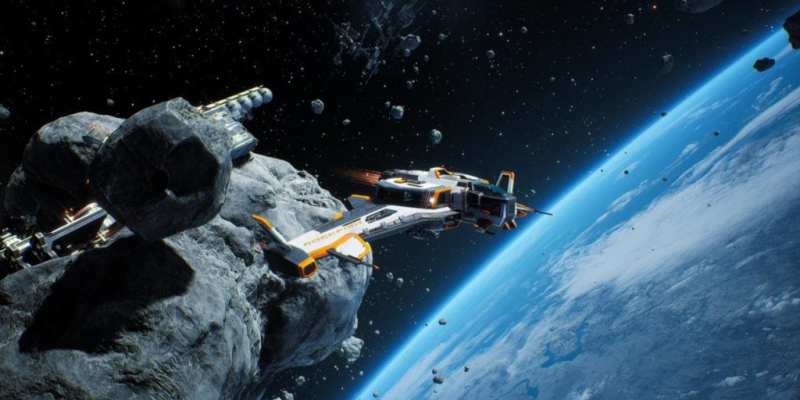 Everspace deserved better than it got, I think, and hopefully Everspace 2 will make more of a splash. The first game used a lot of mechanics popularized by FTL: fight, upgrade, and push ever onwards, choosing your next destination based on limited information about threats. And then die, because it’s a roguelite.

But while FTL and the many games it inspired tended towards tactics and management, Everspace was a space shooter. You controlled your ship directly. You flew, explored, and dodged incoming laser fire manually.

Everspace 2 doesn’t aim to take this a step further, but to triple-jump forwards and to the side. Rather than a fly/die/repeat cycle, it promises an open universe more akin to Privateer, Rebel Galaxy, or – more closely – Freelancer. No more permadeath.

More than a sequel 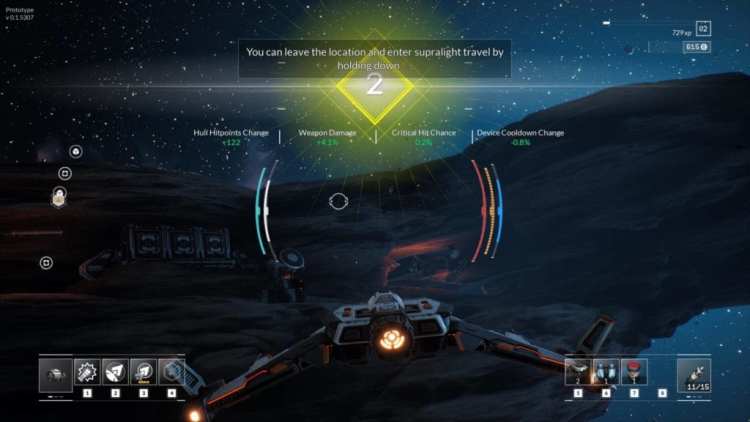 I feel like everything needs to be prefaced with “at this stage in development”, but right now, there’s leveling up as well continual equipment upgrades.

It’s a hell of a move to make. Yes, the moment-to-moment fundamentals of space travel and combat are basically the same. But creating a living, breathing galaxy to explore is a mechanical change on a much grander scale.

Everspace was heavily randomized and had you moving through sectors in a roughly straight line. Everspace 2 chucks all of that out of the airlock. You can go wherever you like, engage in trading or mining, dabble in piracy, and shoot a lot of things.

And at this early stage, it’s really hard to judge this. It’s very easy to see what needs to be done and how it might all fit together, but there’s little I can say for certain. This is, after all, only a demo for the Kickstarter. 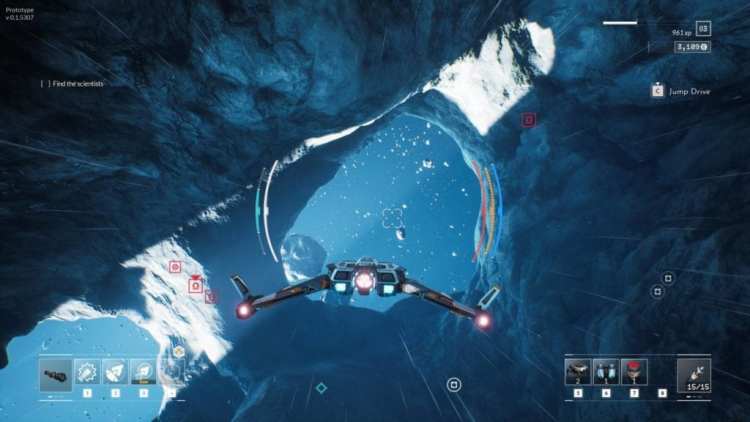 It’s minor, but I still kinda love the ability to fly into little caverns and canyons inside gigantic asteroids.

In fact, “demo” might be pushing it a little. The build of Everspace 2 I’ve played strikes me more as a proof of concept. There’s a single sector with a few areas to explore, a few missions to come across, and some things to shoot.

Unsurprisingly, one aspect that functions beautifully is the way your ship controls. This is pure Everspace: piloting and aiming is done with the mouse, while the keyboard gives you six-degrees-of-freedom controls. Horizontal and vertical strafing, ship rotation, and jetting your way forward or backward are all handled here. This isn’t Elite Dangerous or Star Citizen: it’s fast-paced arcade movement. (Although the Kickstarter does mention optional Newtonian physics.)

Combat is still an enjoyable mix of arcade space battles and action-RPG frills, too. Your ship is your “character”, with weapons, armor, and shields all increasing your survivability. But you’ve also got all sorts of consumables and equipment to help out in other ways, like suddenly teleporting you away from enemies or overpowering your weapons systems to help you fight back. The cycle of fighting random enemies, levelling up, and grabbing loot has a very ARPG feel to it.

Slightly more surprising is that it looks bloody stunning. I’m used to early alphas being a mish-mash of unfinished assets and placeholders, but here that’s only really true when docked or conversing. Everspace 2‘s spaceflight is gorgeous, even at this stage, and I can only salivate at the thought of more (space) environments, ships, and weapons. The C-beams glittering in the dark do, indeed, glitter.

Near the Tannhauser Gate 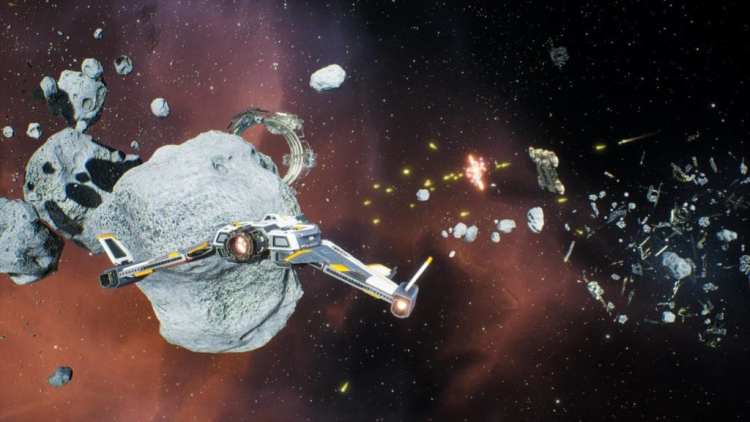 Space, it turns out, isn’t all that empty and is very pretty.

Even in this minor chunk of Everspace 2, there’s quite a lot to do. I spent some time tootling around, fixing leaks in a space station. Then I caused more leaks by shooting at some pirates and was promptly made to fix those too. There were 20 enjoyable minutes of jetting around an asteroid hiding a pirate base, blowing up their turrets and looking for resources and loot that my scanners had detected. And then I found a shiny, epic-rarity laser, so I went and blew up some things to test it out.

I also nearly flew into a planet, because I’m an idiot. But we won’t talk about that.

I’m assuming the demo is a reliable slice of what to expect from Everspace 2 (or at least the current plans, because things change). And if it is, it’s delicious. A lot of it is stuff that we’ve already seen in Everspace, albeit tweaked, fixed up, and rejigged for a game that isn’t a roguelite anymore. Naturally, the Kickstarter mentions plenty more changes and additions to come.

So yes, there’s a lot of work to be done and a lot of systems that may or may not work. But there’s one thing I haven’t seen much of an inkling of, and it’s something I think is rather important: personality. 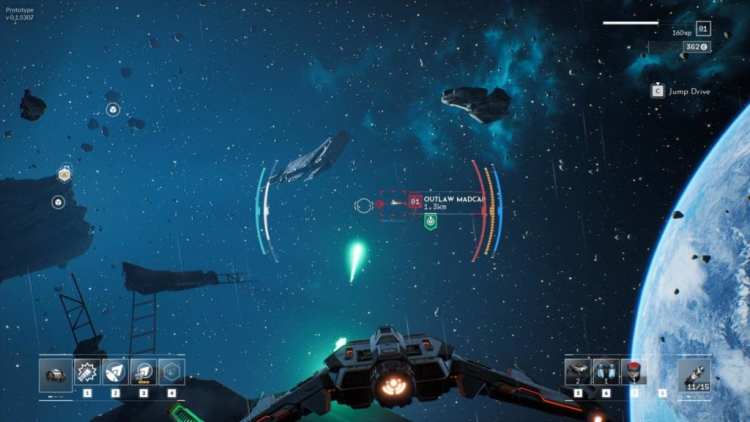 Combat still feels like the main focus in Everspace 2, which is no bad thing.

The Everspace 2 demo build has dialogue and is occasionally amusing, but that’s not what I mean. A lot of my memories with open-world space games revolve around the feel of the galaxy. Rebel Galaxy has shady bars and bartenders, and a dark country soundtrack. Privateer made you feel like a small part of a much bigger galaxy, with dueling militaries. I still clearly remember most of the combat barks, and there was a perverse joy in taunting pirates before destroying them.

That’s what I haven’t seen from Everspace 2. Right now, landing on a station is quite literally touching down on a landing pad and then having a menu pop up. Pirates and the like say nothing, and there’s no communications chatter when you pass a friendly mining ship. In the grand scheme of things, it’s relatively minor, but to my mind, it’s one of the key elements that makes this sort of thing feel genuinely alive.

It’s also the one thing that’s easiest to talk about. I know there’s going to be trading, but I don’t know how well it’ll function. I know combat is in, and if it functions anything like in Everspace (and right now, it does), it’ll be an arcade-y delight. But chatter and communications and such? Not a clue.

There’s a long road ahead for Everspace 2. At the time of writing, there are only a few days left on the Kickstarter. Still, this got me to back it, and I can only hope it’ll see a “last few days” push. If you’ve got any interest in a resurgence for something that looks and plays a lot like Freelancer or might help scratch an itch for a more frantic, action-focused open-world space shooter, you should have a gander at Everspace 2.