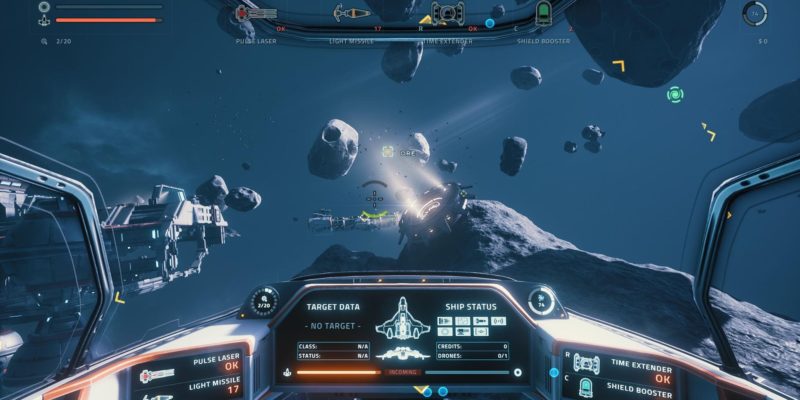 The much-requested HOTAS support has been added to Everspace in Rockfish’s latest patch. Alongside fully customisable controls for HOTAS, Joysticks and Gamepads, 1.1.0 introduces a ‘Hardcore’ mode and a few other desired community features.

TrackIR support has been added too. And it’s now possible to toggle Motion Blur (yay), Chromatic Aberration, and toggle Anti-Aliasing between Off, FXAA, and Temporal AA. As well as all that, there’s a basic Colourblind mode that alters the colours of HUD markers.

The ‘Hardcore’ mode is described as follows: “It is as demanding as hard difficulty, but players are not allowed to improve their starting conditions. Each new run starts out with the same fixed set of pilot perks and without any ship perks upgraded. Players can upgrade ship perks only at the end of each sector, provided they have collected enough credits.” Plus, when entering a new sector, pilots have to select from different (negative) modifiers.

Finally, with the release of the Everspace soundtrack and art book, people who own the game can upgrade to a ‘Deluxe Edition’ and get those two things for $10 USD. Here are a few example images, followed by the patch notes.

Fixed a bug where clones would not spawn again if once killed and then exited out of the run and continued
Fixed infinite loop bug when selecting previous consumables if there is an empty slot at the end
Fixed Okkar Corvette Mk2 plasma cannons not becoming friendly when Corvette gets mainframe-overridden
Fixed Missile Turret device not all stats being displayed
Fixed thermal beam not being affected by sound fx volume settings
Fixed wrong Gunship device slot amount showing in perks screen
Fixed “Scanning…” message occasionally not being removed
Fixed Okkar forces and Warships jumping in with Low Profile Glyph equipped during story missions
Fixed fuel being restored after a jumpgate jump when having the Fuel Conservation glyph equipped
Fixed teleporter device wall hack
VR: Fixed an issue with some HUD widgets still being visible in menus
VR: Fixed that you could apply the resolution/FOV in the display options which would then get loaded in non-VR mode
VR: Fixed that you could enter the action freeze mode via the keyboard, resulting in a black screen
VR: Fixed the positioning of the aiming assist marker
VR: Fixed a slightly offset crosshair when “aim with headtracking” was selected
VR: Fixed that the crafting list widget didn’t scroll correctly
VR: Fixed wrong positions of main menu / intro video when launching the game with an HTC Vive. This is a workaround for a SteamVR plugin bug that slightly increases loading times with HTC Vive headsets.
VR: Fixed that the game would lose input focus when Alt+Tabbing out of the game window or clicking anywhere else
VR: Fixed a hanger that could occur when resetting the run or game from the options menu
VR: Fixed invisible health bar of the final boss
VR: Fixed that you could open the system menu while jumping
VR: Fixed a rare crash that could occur when approaching traders or service stations that are about to jump away