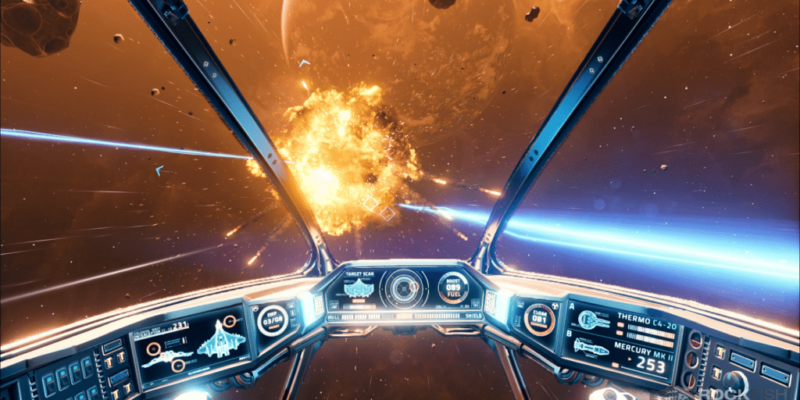 Everspace has just launched on Kickstarter, which provided a fine excuse to meet up with developer Rockfish at Gamescom and find out more about the latest title to hop on board the space game revival shuttle.

In Everspace’s case the shuttle is heading on a slightly different trajectory, because the game is not a typical space sim. One of the title’s selling points is roguelike gameplay; players will retain certain aspects of their progress, mainly ship upgrades, that have been acquired up to the point of death. Starting again will allow you to tweak your ship before the next attempt. 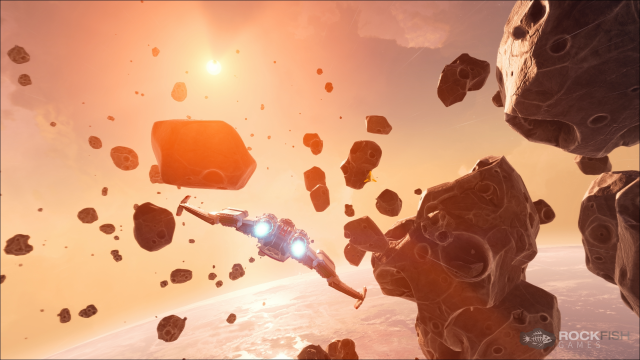 Asteroids: showing up in games since the 1970s.

Every time you restart the game after death the layout of the space sectors will be rearranged, so each playthrough should be different. Players will be travelling through these interlinked sectors, each of which will offer more than one way to progress to the next. It’s the combination of the roguelike elements, the changing of sector positions, and path choice that makes this game an interesting, replayable prospect.

While we all enjoyed Elite: Dangerous (and are yet to enjoy Star Citizen), Everspace should in no way be compared to either of these. This game is about action, exploration, story and its single player mode.

Story will play an important part in Everspace, to the extent that Rockfish have made a conscious decision to bring in adventure game writer Falko Löffler. Talking to the team it sounds like they have only touched briefly on what they have planned at this early stage, while other things are being deliberately kept secret so as not to ruin the narrative; but they also have ideas in place to expand the game beyond the initial release if all goes well. 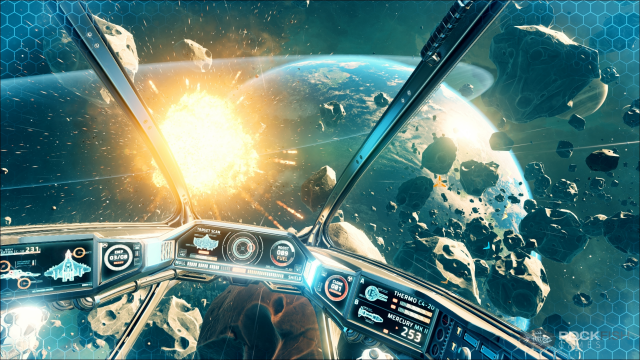 Good job that honeycomb was there to protect me from the blast.

Watching the Gamescom demonstration, it’s immediately apparent that this is an action game. Rockfish are not trying to create a totally realistic space flight physics model, and fans of games such as FreeSpace 2 or the more recent Strike Suit Zero will more than likely get a kick out this. Chatting to the team it was obvious they know their space games, and they know exactly what type of game they want to make to fill a gap in the market with something a little more action-focused.

Though there’s a focus on action, there will be opportunities to explore each of the sectors. This may reveal hidden bases, multiple enemies, or even large capital ships with separate ship systems to target. Rockfish didn’t elaborate too much on the larger vessels and “bosses”; they want to keep much of that under wraps for now so as not to give too much of the plot away.

Exploration in Everspace won’t just result in more combat encounters, it’ll also be essential for resource collection which will aid players in repairing their ship. Because each of the ship’s systems can be damaged, decisions will have to be made regarding what’s repaired with the scarce resources available.

At Gamescom, Rockfish revealed that the game will be VR compatible, a feature they had initially reserved for a Kickstarter stretch goal. So many VR requests were being made from their community, it was decided that support would now be included automatically. That’s a good sign for Everspace’s chances of succeeding on Kickstarter – they are listening to what their fans want. 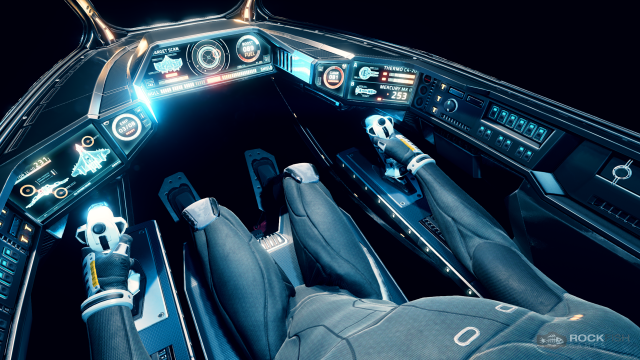 Prepare for more VR “wow my legs are actual in a cockpit” feelings.

There’s no information at the moment who the team will choose as their VR partner. That was another reason (besides demoing the game) for them being at this year’s Gamescom.

Rockfish were one of the many devs we spoke to who are trying to make the best of the upcoming VR hardware but are under no illusion about the current limitations of what can be achieved. The studio has been paying close attention to the VR implementation in games such as Elite: Dangerous, and I look forward to seeing how they tackle it in Everspace. If they get it right, it could be a huge selling point once VR devices begin to hit retail at the end of this year (or the start of 2016 in the case of the Rift).

As you may already have seen from Kickstarter pitch trailer, the game’s choice of Unreal Engine 4 has resulted in some stunning space aesthetics. Working with the Unreal Engine and the PC instead of mobile has been a joy, Rockfish founder Michael Schade told me.

The limitations Rockfish had previously faced when developing their hit mobile game Galaxy on Fire have now been removed, so, thanks to the power of the PC, we can expect some amazing graphical effects. Schade said the Rockfish team are revelling in this newfound freedom. 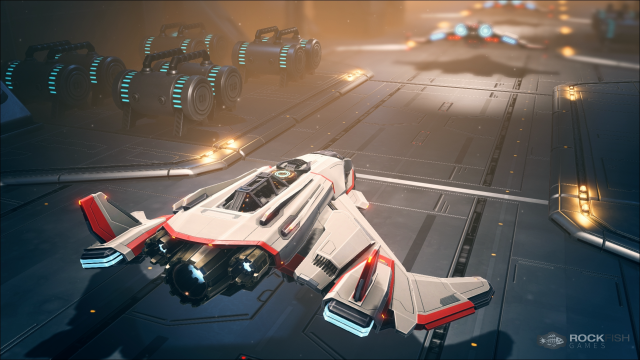 Keeping the fuel barrels right next to the landing runway might be a bit risky.

Rockfish’s team of 14 have the experience to pull off a cracking game, and the studio see Everspace as a potentially major new IP that will hopefully continue beyond this initial release.

We probed about HOTAS support, which we think is essential for a game that’s now committed to using VR. The word there is that it will be added at an $800K stretch goal; so let’s hope they make that because it would be a shame not to have it.

We asked about multiplayer too, but Schade explained that the nature of the story would make co-op difficult. That said, a multiplayer mode is not completely off the table. We suggest you keep an eye on the Kickstarter page because we think it may appear as one of the higher stretch goals.

It’s fantastic to see the space sim genre returning in so many different forms, and Rockfish have probably launched this Kickstarter at exactly the right time. They say they want Everspace to be a game that any PC owner can pick up and play, be challenging, and offer plenty of space action.

You can find out more by heading to the Kickstarter page. Or stick around for the large gallery of images, below.