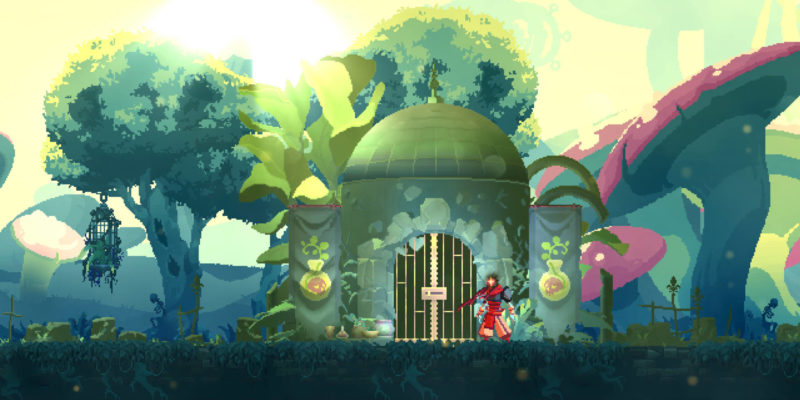 The first paid DLC for Dead Cells is here. At $4.99, The Bad Seed adds two alternative early-game biomes, a new first boss zone, some new enemies, and a sweet weapon. In this guide to Dead Cells: The Bad Seed, we’re going to run you through all of the changes so you know what to expect.

The first new biome you’ll encounter is The Dilapidated Arboretum. It’s a second stage area, accessed after the Prisoners’ Quarters as an alternative to the Promenade of the Condemned and the Toxic Sewers. Before getting there, you’ll need to have gathered the vine and teleportation runes, so if you’re looking for an entrance without those, you won’t find it.

Additionally, you’ll need to find the Gardener’s Key, which we found after climbing a vine and teleporting immediately after. You’ll know you’re in the right area when you see some giant venus fly trap-looking enemies and spiked walls. In order to traverse the vertical corridor, you need to jump when the enemies close their jaw and use their closed mouth to bounce. 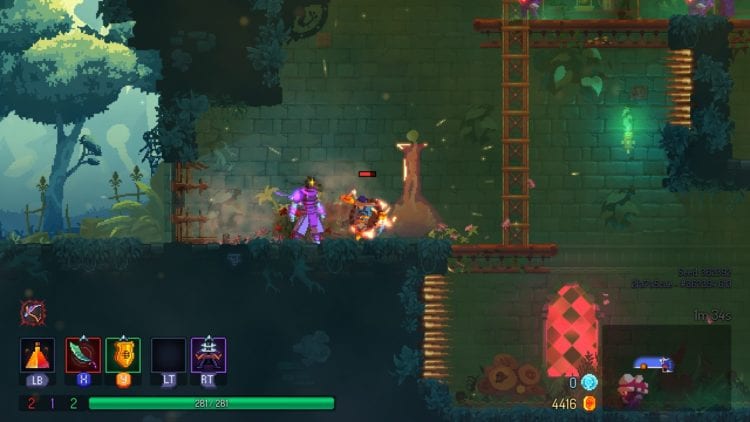 Since The Bad Seed is meant to change the early game, here are the differences for those with Boss Stem Cells enabled:

You can exit The Dilapidated Arboretum to the Ramparts, the standard third level biome, Prison Depths, which you can only access with the Spider Rune, or The Morass of the Banished.

The Morass of the Banished

Inside the new biome, there are five scrolls, three of which are power scrolls. The first two are available in random areas that don’t require runes to access. To find the last, you’ll need to open a guaranteed cursed chest, which spawns in a random location. Upon opening, you’ll receive the scroll, a colorless item, a gem, and a 10-enemies curse. If you take any damage while the curse is active, you’ll die immediately. 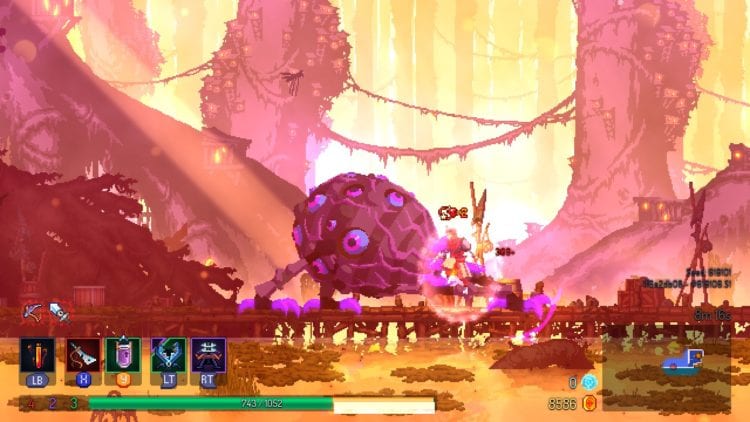 Additionally, you’ll find two dual-stat scrolls, which, again, don’t require runes to access. While there is a guaranteed cursed chest, it doesn’t replace the normal chest in the level. You can still find a treasure chest, which has a 10 percent chance of being a cursed chest.

If you have Boss Stem Cells enabled, here are the differences you can expect:

There are a handful of new enemies in this biome, including Blowgunners, though Giant Ticks stand out most. These enemies are like mini-bosses, providing a glimpse at what’s to come in The Nest. You’ll encounter at least one at the beginning of The Morass of the Banished, though you may see more throughout the level.

The last area of The Bad Seed is an alternative boss zone. Instead of going to the Black Bridge and fighting The Concierge, you can head to The Nest and fight Mama Tick. The only way to access The Nest is through the Morass of the Banished. If you take Ramparts, Ancient Sewers or the Ossuary as your third stage biome, you won’t be able to fight Mama Tick.

Mama Tick is rather different compared to The Concierge. The fight starts with Mama Tick’s eye pointing out as it jumps back and forth between the right and left of the screen. This first stage is pretty simple. With a sword/shield loadout, stay close and parry whenever Mama Tick’s claws shoot up from the ground. For bows, the same rules apply, just dodge. 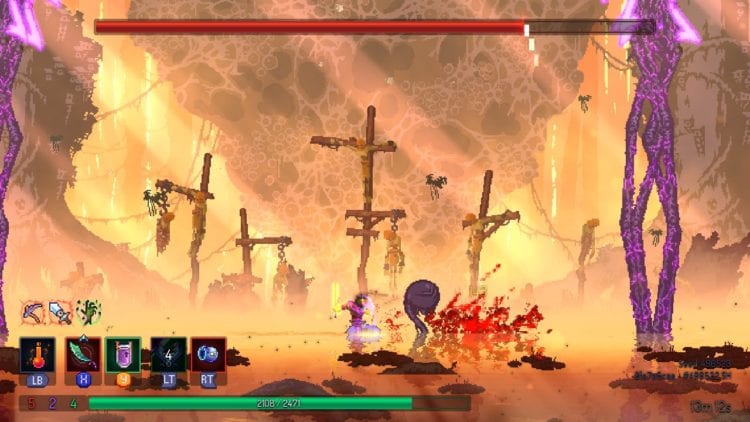 About a fourth of the way down on health, Mama Tick will finally show its true face: a giant, multi-eyed beast with two sharp talons. Again, stay close and parry whenever attacks come your way. Mama Tick will move underground between both sides of the stage, occasionally unloading a barrage of claw attack from under the ground. 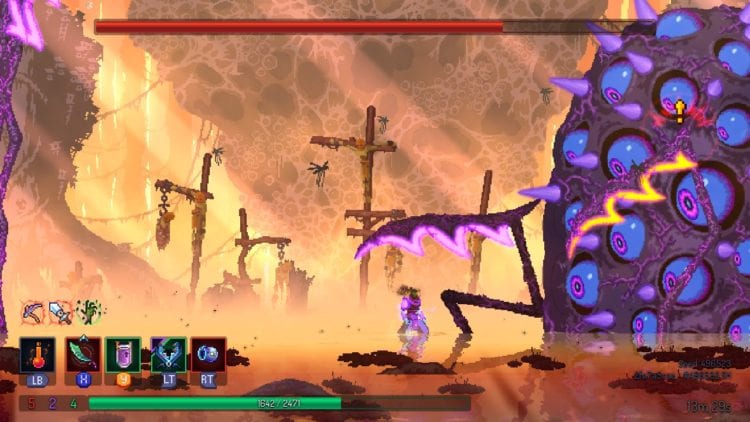 Two things you should note about Mama Tick: it doesn’t have any unblockable attacks, and traps do absolutely nothing. If you plan on traveling to The Nest, it’s better to prioritize skills like grenades and turrets. Since Mama Tick doesn’t move, it can’t get caught in traps.

Once defeated for the first time, Mama Tick will drop the Scythe Claw blueprint. On additional runs, it has a chance of dropping a Giant Tick outfit.

The Scythe Claw is unlike any weapon in Dead Cells. It requires both of your attack slots, offering two different ways of swinging. The Scythe Claw is slow, but it’s deadly. With a huge range of motion and devastating damage, most normal enemies will fall to it in a hit or two.

Although the Scythe Claw requires both attack slots, you can find higher level swings for each slot. You can see the Scythe in action in the screenshots below. 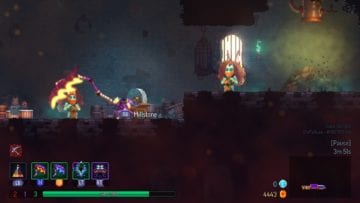 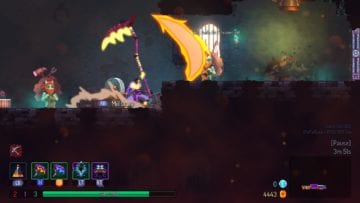 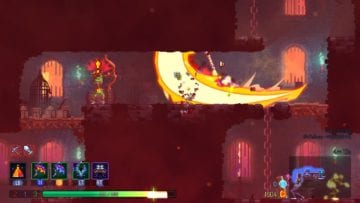 Although Dead Cells has a long tradition of free DLC, The Bad Seed adds enough to justify the $4.99 asking price. The new biomes are loads of fun, as is the new boss, with the scythe being the cherry on top. If you already picked up The Bad Seed, let us know how you’re liking it in the comments below. If you’re on the fence, make sure to read the review on our sister site, Destructoid.

By Jason Rodriguez1 min ago
Guides

Genshin Impact Katsuragikiri Nagamasa guide — How to get the weapon