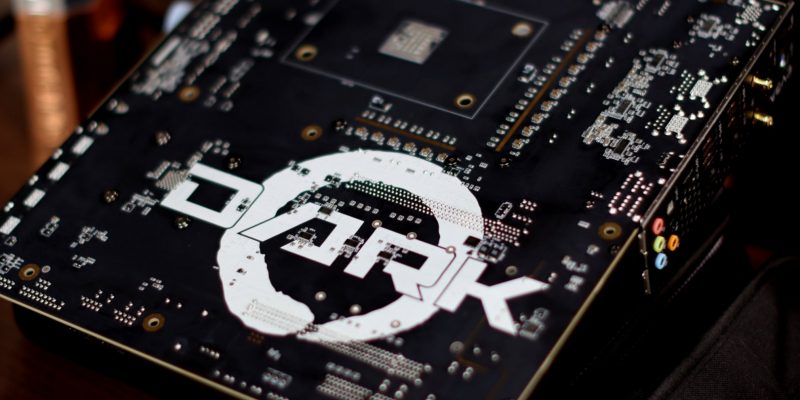 In the wake of last month’s teaser for the upcoming EVGA Ryzen Dark Series motherboards, a photo of an actual product has been revealed. EVGA’s resident extreme overclocker, Vince “Kingpin” Lucido, teased an image in a post on Facebook. It only reveals the backside of the board, but the Ryzen logo with “DARK” layered on top of it certainly looks sleek. This particular board is presumed to be an X570 and looks like it will be able to support two large graphics cards if desired. No additional details like pricing, exact features, or a release date have been confirmed yet.

When it comes to high end motherboards for gaming, the premier options that come to mind are the Z-series boards designed for Intel and the X-series from AMD. These two product families then come in many flavors from a variety of manufacturers. While you have the big names like Gigabyte, MSI, ASUS, and ASRock, there are additional manufacturers like EVGA that also produce solid designs.

However, when people typically think of EVGA, they think of Intel and Nvidia due to the company’s long-running partnerships with Team Blue and Green. The fact that EVGA is willing to break exclusivity ties with Intel in an effort to address the Ryzen segment of the CPU market is certainly a sign of the times in the war for X86 processor supremacy.

While the new deal to produce Ryzen motherboards is surprising given EVGA’s track record, the growing CPU market share and optimistic projections for future Ryzen products does lend reason to the shift in partnerships. Don’t expect anything to change between EVGA and Nvidia though. Team Green still has more than enough market share and sway over EVGA to make Radeon graphics cards pretty much out of the question at this point in time.

We’ll provide all of the details once we learn more about the EVGA Ryzen Dark Series motherboards.

A new Darkness is coming… https://t.co/5SSqvyxbq4

You can soon dunk on everyone as Lebron James in Fortnite