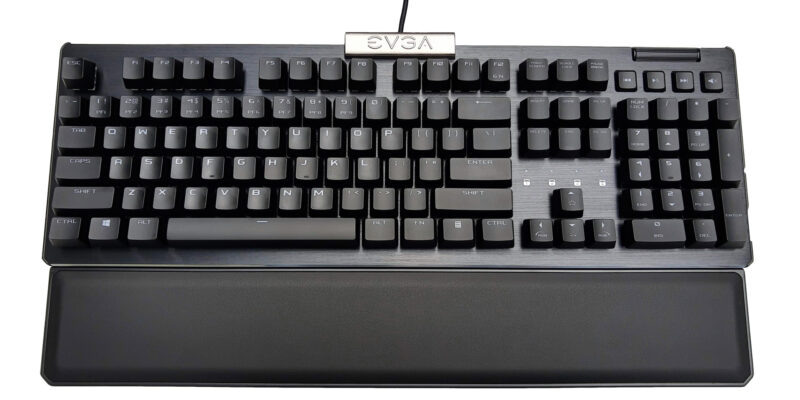 While most gamers recognize keyboard brands like Corsair, Logitech, Razer, HyperX, etc, there’s an absurd number of additional options out there. That includes other household brands such as GPU manufacturers, boutique keyboard makers, discount brands, and new players in the market. The reason there is so much competition is because these types of products offer great profit margins and it’s relatively easy to source components. This is why it should come as no surprise that EVGA has been selling both gaming mice and mechanical keyboards for years now, and we picked up the Z15 to review.

The Z15 released in February 2021, and we have some important notes in the conclusion about its current position in the market. But first, let’s cover the product itself. The EVGA Z15 is a full-size RGB mechanical gaming keyboard with sleek looks and several trending premium features. These include the aluminum front plate, individually addressable RGB keys, onboard memory for profiles, full media controls, up to a 4,000Hz polling rate, and a magnetic wrist rest to name a few. You also get all of the basic specs that you would expect out of a mechanical gaming keyboard such as anti-ghosting, swappable switches, and the windows lock function.

The Z15 is a decent product, though it has some flaws that hold it back from being great. These include a couple of issues with the build quality, buggy software support, and a price that isn’t competitive for what it truly offers. Simply put, this keyboard has its pros and cons. The issues could add up enough to make it a deal breaker for some, while others may find the EVGA Z15 RGB mechanical keyboard to be an excellent deal. You need to understand the whole picture before you make the decision to purchase it, though.

The EVGA Z15 is a full size keyboard that is nicely compact and looks quite premium at first glance. If you go through the product page on EVGA’s website, it checks a lot of boxes. Unfortunately, it doesn’t quite deliver on all of its features, which is why reviews such as these are so important to check out first. Here are the full specs to get a better understanding of what this keyboard offers. We’ll then discuss how it all performs and feels.

From the moment you take it out of the box, you get the vibe that you have a premium keyboard. The frame feels solid, the aluminum front plate finish looks sleek, and you’ll discover that the awkward silver EVGA badge at the top of the board is metal instead of plastic. There’s also a polished metal lip on the front of the board along with a metal volume wheel. So many of these things could have been plastic instead, which shows someone put a lot of effort into this aspect of the design.

However, once you start using the keyboard, the flaws become evident. It’s unfortunate that EVGA decided to cut costs with cheap ABS keycaps, skipped on a detachable USB Type-C connector, and didn’t pay closer attention to making the keys feel tightly secured to the switches. There’s a little more play in the keycaps than there should be for a keyboard that’s MSRP is at $130 USD. These are the only real criticisms about build quality, though these issues could be enough to already turn some keyboard enthusiasts away.

If these concerns don’t trouble you too much, there are a few other redeeming factors to speak of in the build quality. The cable itself is long enough for any setup. It’s also braided and comes with a fastener so that you can bundle the cord up for easy travel. The volume wheel is very easy to manipulate due to its overhanging placement at the edge of the board, the media control buttons feel satisfying to click, and the USB connector is customized for a neat look and feel. There are also indicator lights for functions like caps lock and Window key lock. 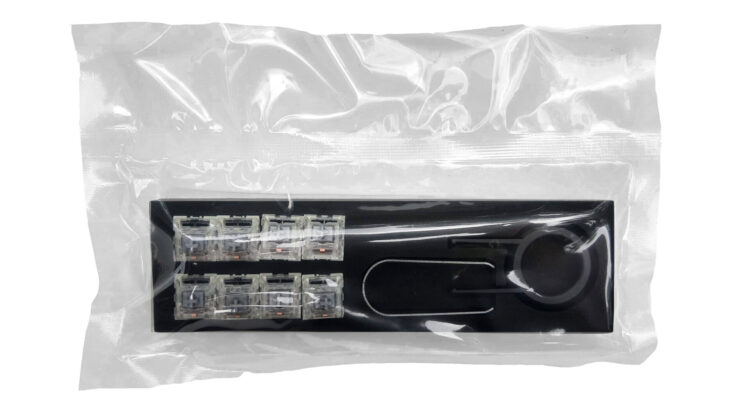 How does it feel?

The benefits of using a full size keyboard are obvious when it comes to the number of keys at your command. Aside from the convenience of additional key assignment options, you don’t have to use a pesky function key and memorize extra commands. Full-sized boards can feel clunky, though. EVGA manages this potential issue as best it can on the Z15 with a compact design. Compared to other full size boards, the Z15 is small and works with desks that have less surface area. This also makes the Z15 decent for gaming, though probably still not for FPS games that require wide and aggressive mouse flicks.

EVGA also incorporated some extra features into the design of the Z15 with the intent to improve user comfort. These features relate to two additional incline height options and the magnetic wrist rest. The height adjusters work great, and the magnetic functionality of the wrist rest is very handy. The only drawback is that the wrist rest is hard plastic. Still, it’s much easier on the wrists than having nothing there. This board also won’t slip on you, as it has three wide rubber feet on both the front and back to keep it planted during gameplay. 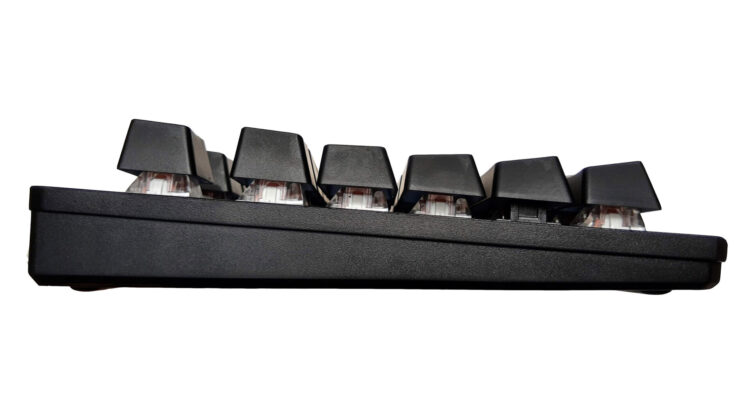 Typing on the EVGA Z15 mechanical keyboard feels awkward, but mainly because of the type of switches on the review unit. My typing speed definitely decreased compared to using a board with linear switches. And with that in mind, it felt two tiers down from a membrane keyboard. If you plan to do a lot of typing, you may want a second keyboard for that. Admittedly, this is a weird recommendation to make. This concept of swapping out keyboards based upon the task at hand would be more justifiable though if the board featured a detachable USB Type-C connector. At the very least, opt for the version of this board with linear switches.

For gameplay, this board feels excellent due to the aggressive keycap grooves and how the clicky switches feel. You can always tell that inputs register. As long as you don’t mind the loud clacking that ensues, the Kailh Bronze switches feel great. These aren’t optical switches, but many brands still have yet to make that full switch. For now, physical switches are still acceptable. 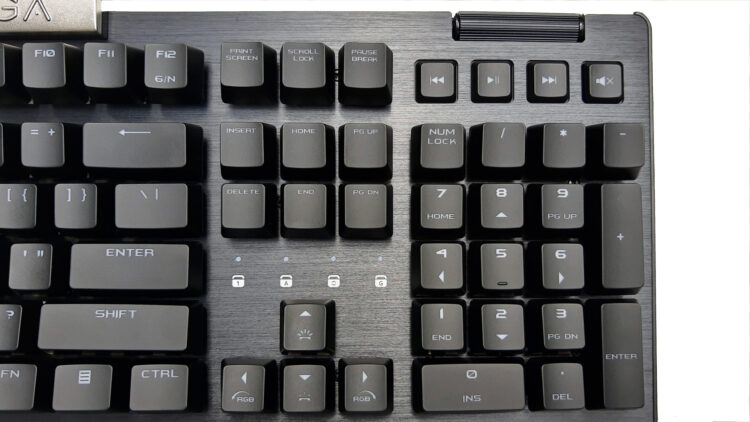 The font is a bit edgy and futuristic, so make sure you’re okay with that. (Image credit: PC Invasion).

Dial up the performance

High polling rate keyboards have been trending lately now that so many gamers have access to CPUs with higher core and thread counts, which can handle the performance hits. Admittedly, it’s still just a premium feature at this point that’s superfluous unless you’re highly invested in competitive multiplayer and have exceptional reflexes. However, it’s still nice to have and can make a difference if you’re building a rig with low latency in mind.

EVGA jumped on the bandwagon with its Z15 mechanical gaming keyboard and included the option to enable 4,000Hz polling. That cuts the response rate from 1ms to just 0.25ms, albeit with a hit to your CPU. If you have an 8-core CPU, this probably won’t impact your framerate unless your playing above 165Hz. However, higher polling rates seem more useful for a mouse. You may choose to prioritize resources there instead of your keyboard. If you plan to upgrade your CPU in the next couple years, consider the higher polling rate option something that you can take advantage of in the future.

The EVGA Z15 mechanical gaming keyboard comes preset at 1,000Hz out of the box. In order to get the full performance, you need to download the the EVGA RGB Unleash software. You’ll also use the same software for your macros, custom keybinds, DPI settings, and RGB effects. 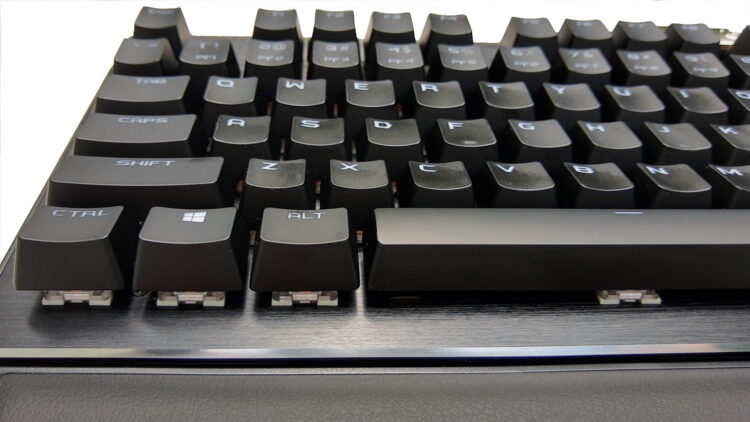 EVGA is a company that’s well known for its hardware offerings like graphics cards, power supplies, and motherboards. It also makes software for some of its products, and the same is true about its mice and keyboards. Frankly, EVGA has some work to do with improving the Unleash software. Compared to Corsair’s iCUE software, Unleash is behind the curve in a few ways. For starters, it looks a bit dated and offers fewer RGB options than competitors.

The real issue, though, is that I couldn’t get macros to work, and that is a major inconvenience for users that prefer to manage things in one place. You can use separate software for your macros to circumvent this, but you shouldn’t have to. 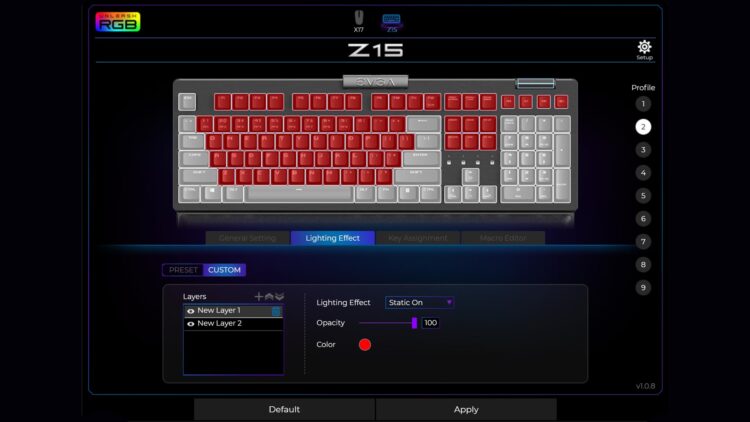 EVGA RGB Unleash shares some UI and function similarities with iCUE if you’re familiar with that. It just isn’t as fleshed out.

Furthermore, the software doesn’t always initialize upon startup of the PC and sometimes unexplainably switches profiles. You can partially mitigate the profile issue by hitting function and 1-9 to reselect the appropriate profile. If you’d rather not fiddle with lighting resets from time to time when starting your PC, you can configure the hardware settings, but your options will be limited to the preset patterns.

By contrast, you can fully program keyboards from other brands with per key RGB, even in hardware mode. Per key RGB programming is only an option when Unleash is running as a background process. The lights and patterns do look just as good as anything else you’ll find on the market, though. If all you need are some basic rainbow waves, patterns, or static illumination, you’re good to go with the EVGA Z15 keyboard. 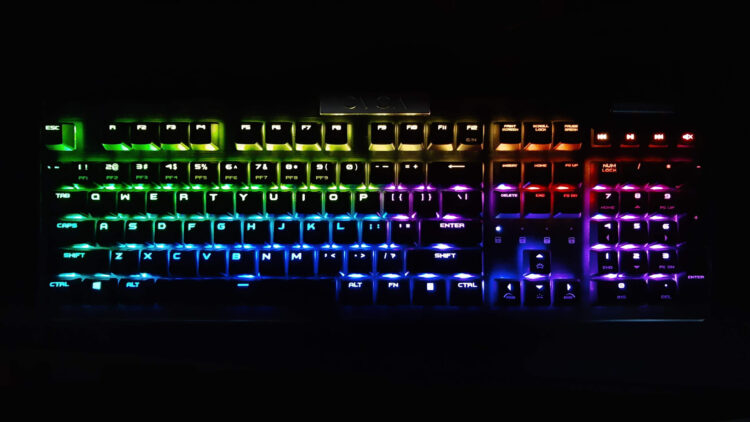 The Z15 looks superb when lit up in the dark. (Image credit: PC Invasion).

Should you buy the EVGA Z15 RGB mechanical gaming keyboard?

The EVGA Z15 RGB mechanical keyboard has some premium features that are genuinely attractive. The keyboard is also generally great to game on with all things considered. However, its underwhelming software, inconsistent build quality, and usability oversights make it a bit overpriced in the current market. EVGA needs to make a few revisions to this product in order for it to be considered a premium gaming keyboard.

Our review score is based upon the MSRP of the EVGA Z15 RGB mechanical keyboard, but since this review has come out after release, we want to point out that you can now get this keyboard for considerably less than MSRP. EVGA itself is selling the Z15 on Amazon for just $90 USD, and some retailers offer it for much lower. With these prices in mind, this keyboard should be a no brainer for anyone mildly interested in it. It’s not perfect, but the discounted prices offer an excellent value for those on a budget that don’t want to sacrifice on features or take the risk of buying from unfamiliar brands.

The EVGA Z15 generally delivers on a long list of features, but falls short in several defining categories for a premium gaming keyboard. The software will get annoying to deal with and needs a serious refresh to impress. That alone would be enough of an improvement to make the keyboard worth buying. If you have your eyes on this keyboard regardless, it fairs alright.