Combat in Evil West is refreshingly different than the norm. It offers a combination of melee and ranged attacks that grant the player a fair amount of agency when dealing with enemies. Unlike Shadow Warrior 3, this game will absolutely destroy you if you don’t bring your A-game, as enemy groups constantly mix and match different combinations of foes that require you to make use of Jesse’s full skillset. In this guide we’re going to break down the basics you need to know about Evil West combat, which will cover dodging, weapons, and proper enemy management.

One of the most important pieces of your skillset in Evil West is the dodge. Tapping the button will let you move in any direction, granting some invincibility frames along the way. If you hold the button down or double-tap it, Jesse will do a dodge roll, which covers more ground and grants even more invincibility frames. You’ll need to pick the best one for the job based on enemy capabilities. But that’s not all there is to dodging. Dodge rolling will cancel out of many things, including any secondary weapons Jesse is holding, charging shots, or melee combos. But you can keep most of those going after a dodge (at least with the right perk).

Evil West – Your guide to maximize your combat potential

What that means is that, if you’re charging an electric shot for your rifle and an enemy swipes at you, dodge rolling will cancel your charge. But if you do a shorter dodge, Jesse will continue to hold the charge. If you become proficient with this, it can make Evil West combat that much more manageable. For most of the game, you won’t be able to tank much damage, so it pays to have to heal only when you need to. Stronger enemies can easily decimate your health bar in no time otherwise. 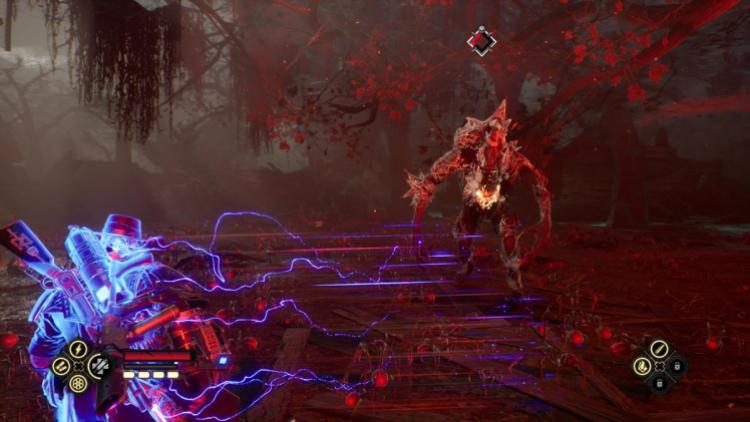 Early on in Evil West, you gain shock abilities for your gauntlet, letting you make short work of most weaker foes. Jesse can parry enemy strikes that don’t come courtesy of a glowing foe. This has him bring up a little electrical field that lasts a second or so. Any regular attack that strikes the field will be nullified, but normal enemies will become stunned. If you attack these electrically stunned enemies, you’ll punch them much more rapidly and do more damage than with a regular melee combo. What’s more, this is a great way to charge up your gauntlet energy.

But the glove offers so much more flexibility than that. You can use it to pull weaker enemies to you, which also stuns them. This is great for ranged enemies that are taking potshots at you. The pull only works at medium range, but it’s indispensable for when an enemy is shooting from a vantage point. You can also pull yourself to enemies, which stuns weaker foes. For stronger enemies, this still works but it won’t stun them. Similarly, you can parry stronger foe attacks. It only nullifies the damage, but it is great if you’re more into blocking than dodging.

Jesse has strong moves that can interrupt most enemy attacks. When enemies glow, that means that only certain moves can knock them out of it — like Jesse’s kick. You can interrupt with the uppercut. Simply using the melee attack will cause Jesse to unleash part of a punch combo. However, holding the button down without moving will let you launch weaker enemies. You can then suspend them in mid-air with more punches or shots from your revolver. If you are moving, Jesse will go into the air with them. Press the melee button again and he’ll slam them into the ground at an angle, which is fantastic for crowd control. 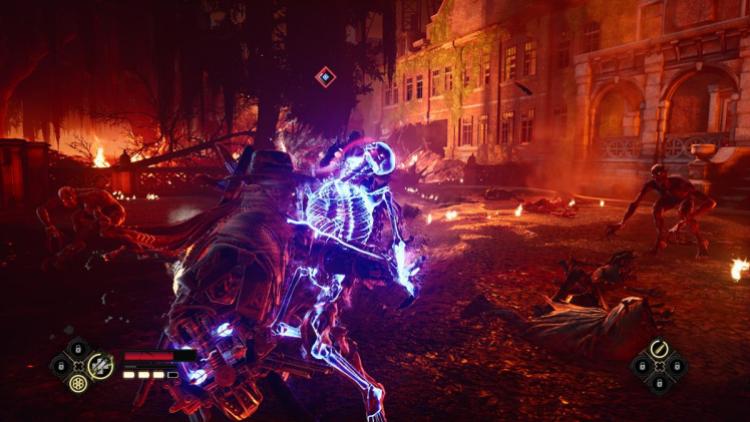 Evil West gives you multiple combat abilities that you can use on cooldown. They include a shotgun blast, a move that electrocutes and stuns any enemies near you (including bosses), a flamethrower that sets enemies on fire for a time, dynamite that you throw at foes, and a Gatling gun. For tougher enemy encounters where you’re swarmed, it’s important to make frequent use of all these abilities. They not only give you breathing room, but do a considerable amount of damage.

But the strongest tool in your arsenal is supercharging. By default, you have four energy cells that have a small variety of uses. The best of these is the supercharge, which uses three entire cells. It basically turns Jesse into a teleport-punching maniac. It does an enormous amount of damage and can immediately turn the tide of a fight. It’s best used against stronger enemies, such as the huge vampire bat. The sooner you take out the stronger enemies, the better, as you don’t want them ripping your health apart during a fight while you’re focusing on something else.

Despite all of this, Evil West allows you to tailor its combat to your own preferences, so you can build Jesse to focus on any attacks you like using the most. It’s comparable to the freedom in a character action game, so experiment with it until you’re comfortable. As long as you bear all this information in mind, you should be more than equipped to take down anything the game throws at you. Although you may still find yourself getting pushed to your limits on occasion. 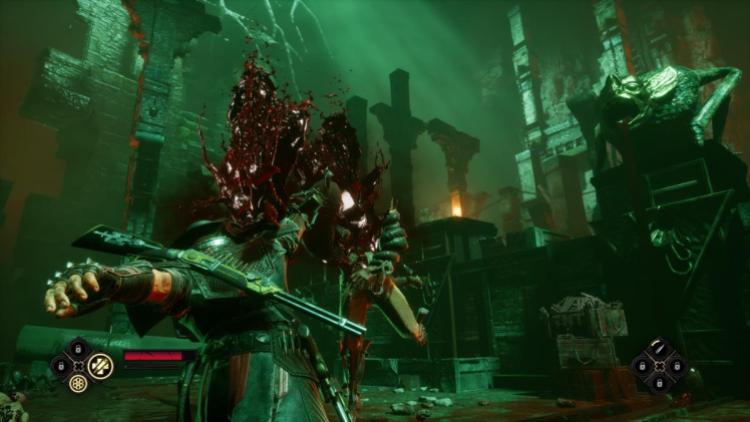 By Andrew Farrell20 mins ago
Tech

By Andrew Farrell30 mins ago
Reviews