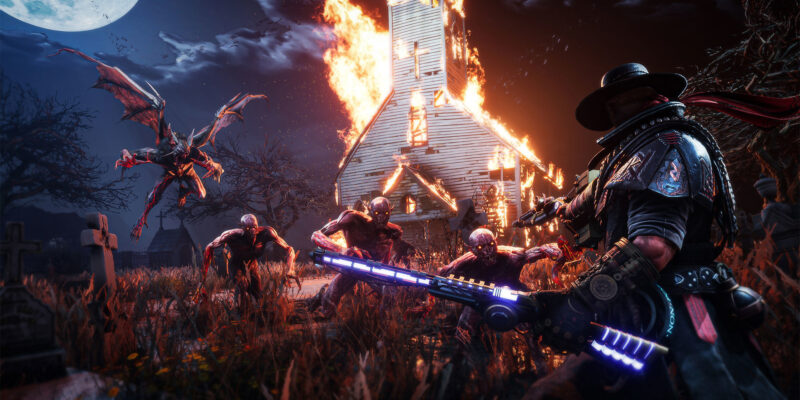 Have you ever imagined what the Wild West would look like if it was overrun by vampires? Well, Evil West gives you a pretty good idea in this cowboy-meets-dark-fantasy world. At The Game Awards 2021, Flying Wild Hog and Focus Home Interactive showed off some vampire-slaying action with a bloody Evil West gameplay reveal trailer.

You wield a lightning-fueled gauntlet, a range of classic cowboy guns, and some handy gadgets as you slaughter hordes of undead. Also, you get a flamethrower. Best of all, you can do it solo or co-op with a buddy.

The fastest and most blood covered fist in the West

Apparently, even the Old West had top-secret institutions dedicated to hunting vampires. In Evil West, you work for that institution. And there are a lot of vampires that need hunting. As the monsters emerge from the shadows, you will fight on the frontlines to defend humanity. Well, the United States. As you progress, you will be able to upgrade your weapons and hunting tools. You will also be able to unlock perks to fine-tune your monster-slaying skills.

As you can see from the Final West gameplay trailer below, the third-person action combat is visceral and bloody. You can chain combos together to pulverize vampires and the forces of darkness into a bloody mess. You’re also going to need quick fingers to keep up with the pace as you tackle hulking monsters, demon creatures, and all manner of abominations. I foresee a lot of blood on that shiny gauntlet.

Evil West was originally scheduled to release in 2021. However, the word around town (and at the end of the gameplay trailer) is that Evil West is coming in 2022. It already has a Steam page up. So, you can go and check it out and give it a follow to keep up on any new announcements.

The Expanse: A Telltale Series revealed as a prequel game to the show