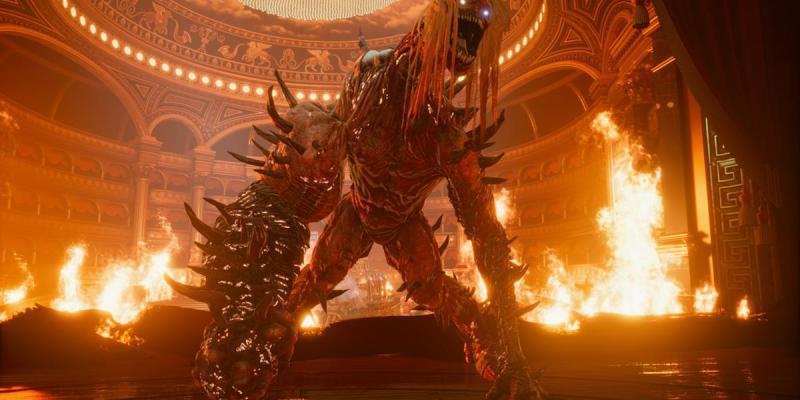 Felicity is the final boss of Evil West. Despite appearing as a child prior to this fight, she’s enormous and capable of easily tearing you to pieces. Much like the fight against William, this fight is three phases, with a checkpoint at the start of each phase. As such, you may not want to use up your energy cells all at once, as you’ll need to restart the level to get back into the battle fresh. As the level has what’s probably the toughest fight in the whole game before the boss, you probably don’t want to do that. Here’s how to beat Felicity in Evil West.

How to beat Felicity in Evil West

As soon as the first phase starts, she’ll charge at you, so dodge roll. Whenever she does this move, she always follows it up with a ground slam that you also need to dodge. It’s best not to waste time centering the camera on her after the first move — you’ll only get hit. Don’t look, just spam your dodge ASAP. Aside from these moves, she pounds the ground twice in a row to send shockwaves that hurt you. On occasion, she’ll do a third one of these which has a weakness circle you can shoot. But you’ll need to be quick. She also does the ground slam by itself with frequency. There’s another move where she turns yellow and rears her arm back to slam her fist on the ground and you can kick her out of this. This phase is mostly about dodging and shooting her. Her second phase is honestly quite a bit easier since you’ll have two chances to really do some damage based on her moves. The fight itself is mostly similar, although her moves change a bit. Her charge move is now used four times in a row. When she starts up, just keep dodging. After the fourth charge, she rests for a bit, which is a great chance to get some punches in and then use the electric stun and keep the damage up. The shotgun is also a good idea. She’ll continue to leap at you, but you should have those dodges down by now. She likes to jump on the walls and rain fiery death down upon you, but shoot her three weak points and she’ll stop and do the same thing on the opposite wall. Each weak point you shoot will give you healing, so rush over and grab it if you need it.

Her third phase is also not too bad. She gets bigger, though. She’ll slam the ground so hard pieces of the building will start falling onto the playing field. She also has more slams that create shockwaves. You can actually use the pieces of the building that fall as cover from these attacks. She’ll also start throwing pieces of the rubble at you. Again, the rubble scattered around will protect you, but it breaks after several hits from Felicity. Otherwise, dodge when you see her holding the huge pieces of wood in her hand.

She has her weak point show up when she throws the final piece of wood, which is again good for some punishment. At a couple of points, she’ll start glowing so you need to run up to her and use your melee attack. She doesn’t take long to go down for good. That’s all you need to know how to beat Felicity in Evil West. This game’s elite enemies in groups are way tougher than most of the bosses, huh?

By Andrew Farrell21 mins ago
Guides

By Andrew Farrell31 mins ago
Guides