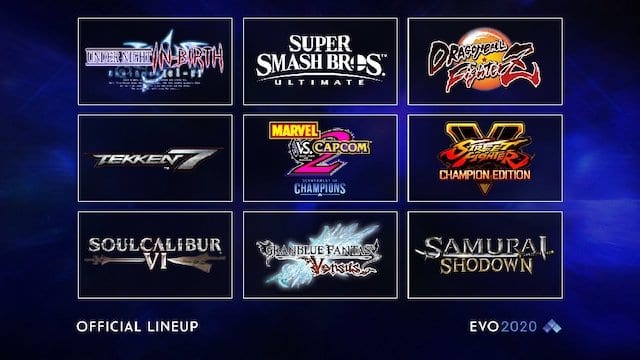 When it takes place in Las Vegas from July 31 through August 2, EVO 2020 should get a huge draw from fighting fans. However, a couple of communities are sore about their favorites not being in the mix. The EVO team announced the games that will be featured at their annual tournament this summer. There are a number of popular favorites, along with debuting titles and the return of a long-lost classic. However, both Mortal Kombat 11 and BlazBlue: Cross Tag Team Battle are conspicuously missing.

What games will tournament players get to enjoy at EVO 2020?

The lineup includes returning favorites like Dragon Ball FighterZ, Street Fighter V (with its new Champion Edition), Tekken 7, and SoulCalibur VI. In addition, Under Night In-Birth EXE Late [cl-r] and Granblue Fantasy Versus will debut. Also, Marvel vs. Capcom 2 will come back with an eight-player invitational.

But why are the others not there? Probably one of two reasons. Since the EVO tournaments are usually online (and sometimes televised), Mortal Kombat‘s removal might have been due to its excessive violence. However, there’s also another likely reason, as NetherRealm will host its own Final Kombat tournament in March.

As for BlazBlue, it was likely taken off the roster to make room for Guilty Gear -Strive-, which could potentially be at the event in some capacity. It’s due to debut sometime this year, so setting up a tournament to hype its debut would be a novel idea. Keep in mind that Arc System Works’ Under Night In-Birth EXE Late [cl-r] will also have a presence at the tournament. The publisher may have chosen to pull BlazBlue as it would have stood out against its new releases.

Don’t feel too bad, however. There will likely be a smaller BlazBlue: Cross Tag Team Battle tournament somewhere at the event, given its popularity.

Those interested in attending this year’s EVO event can learn more about it on its official website.