This is the second time I’ve been galavanting about inside Turtle Rock’s Evolve, but the first where I’ve actually been able to write about it. Last time, 2K splashed multiple watermarks all over the screen and said nobody could discuss anything. This time there’s only one watermark and I’m not gagged, so that’s already an improvement.

So, here’s what I think of Evolve’s latest alpha test. Which in reality is a pre-release beta test, because the game is out in three months time. 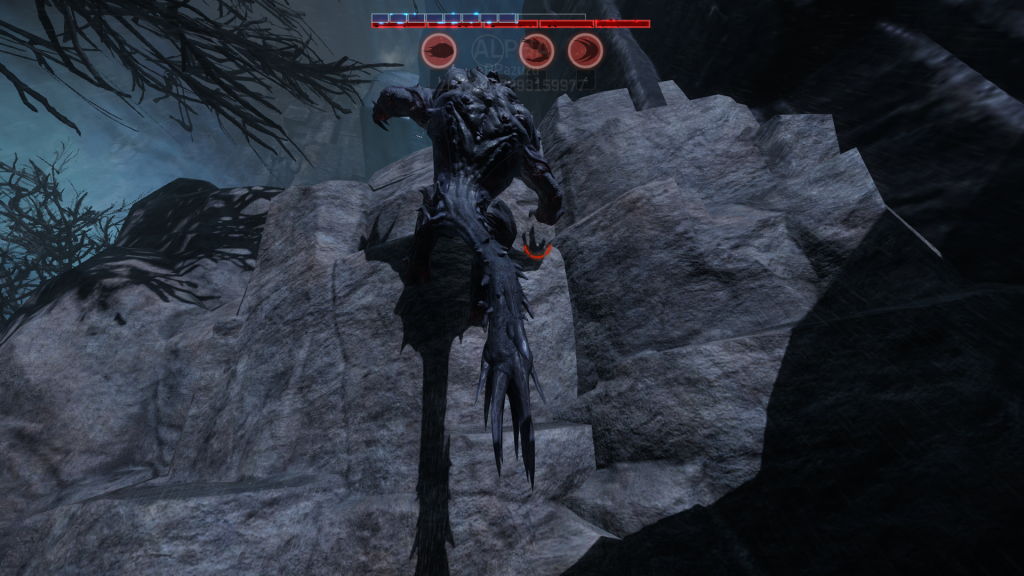 Evolve pits a multi-class team of four hunters against a big rampaging monster. There were two in this alpha, the roid-rage Goliath and the sneakier Kraken. In the ‘Hunt’ mode (the only one present here,) the monster’s aim is to stick around and eat as much wildlife as possible until it can *title sirens* evolve *title sirens* through stages two and three, becoming much more powerful in the process.

Meanwhile, the hunting team need to track it down and (preferably) beat it up when it’s still in stage one. The monster also gets a special instant-win objective at level three, in case it doesn’t fancy just murdering everyone.

Anyway. Online performance anxiety is particularly easy to experience in Evolve because (in this alpha, at least,) the game doesn’t really tell you a whole lot beyond a brief tutorial video. It’s the arsehole swimming coach who roams around the edge of the pool pushing children into the water and shouting “swim, tiny idiots, SWIM!”

Or, in this case, “be a Trapper and make sure you’re immediately competent at it or the hunting team will have a lousy time.” 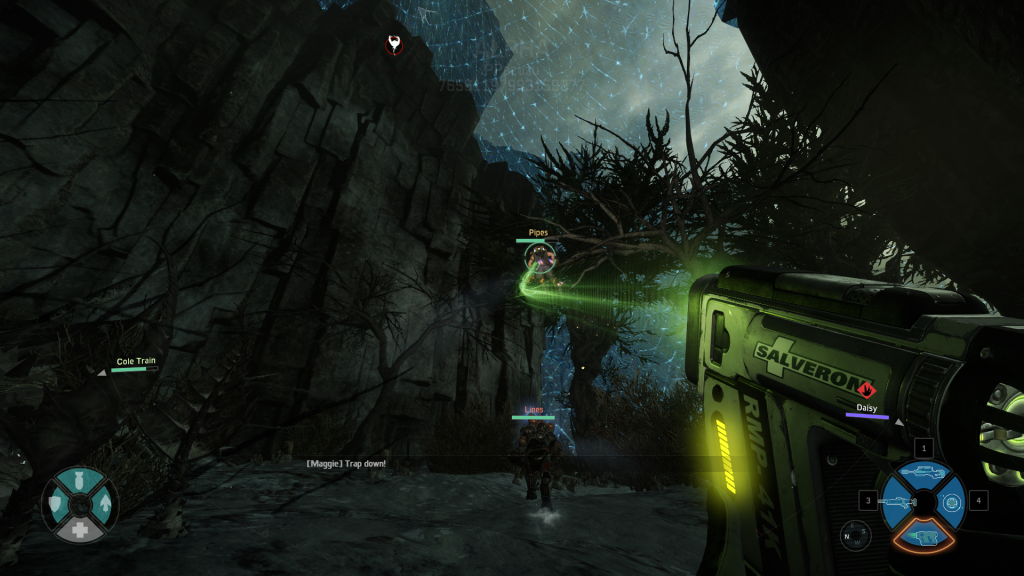 Playing as a Medic was a lot less stressful, oddly.

The various 4v1 matches I played over the weekend had a distinct and joyous whiff of chaos about them; the kind you only get from a multiplayer title still being figured out by its participants. From games that conclude in a few minutes because the monster succumbed to performance anxiety and attacked the hunting team in its weakest, first-stage state, dying horribly, to those which were a drawn-out, near 20 minute chase around the map ending in a narrow victory for the beast. As well as everything in between.

In Evolve, the four-person hunting team need to work together. They need to complement one another’s abilities. If the Medic can tranquilise the monster, it’ll be easier for the Trapper to use their vital containment dome power, which in turns means the Assault can be unleashing hell on it in an enclosed space and the Support can be prepping an aerial bombardment. That kind of thing.

When this actually happens it’s enlightening to behold. A couple of times during this alpha I got to see Evolve’s pieces slotting properly together. I saw the intended cat-and-mouse style chase, interrupted by mini confrontations resulting in lasting damage to both sides.

Problem is, quite a bit can go wrong to upset the circumstances of a ‘correct’ game occurring. 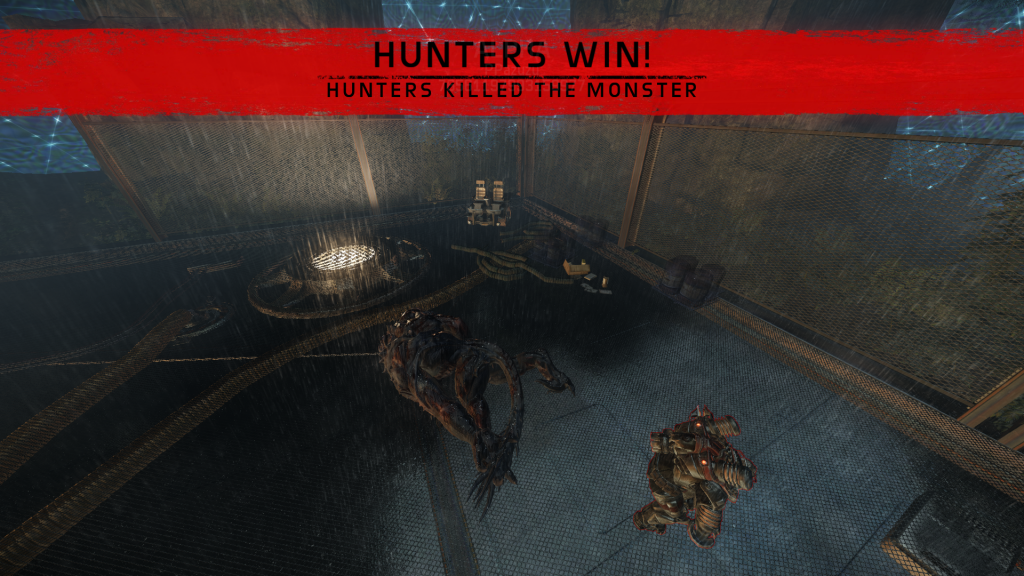 This is an example of a match going poorly. For me.

If the hunting team’s Trapper is no good, the hunting team are screwed. Being able to find the monster and snag it inside the magic dome are absolutely crucial; and the responsibility for those things (particularly the latter) falls on the Trapper. Nobody else on the hunting side, not even the Medic, seems to carry that kind of pressure.

If the monster player is no good, the round won’t last long. Conversely, if they’re really good and manage to avoid any of the tell-tale alerts like startling birds or leaving too many tracks, much of the hunting team’s time will be spent wandering and jet-pack boosting around some admittedly fairly pretty looking maps.

It’s difficult to make definitive judgments about this stuff because the vast majority of the player base are still figuring things out, but Hunt mode already seemed to be falling into a bit of a pattern.

Namely, if the monster was encountered at stage one; hunters win. If at stage two, it’s a bit more of a toss-up. If the monster gets to three, hunters are pretty screwed. That probably results in 50/50 win statistics overall, but when in-game you feel as if you kind of know the outcome to two out of the three possible scenarios. 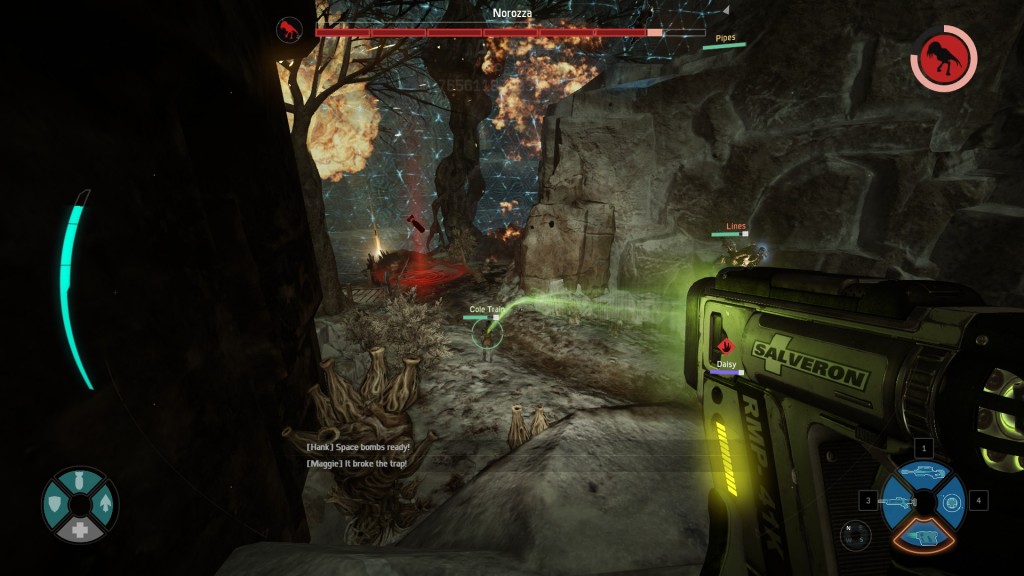 The monster’s time in Evolve is always well spent, sniffing out the scenery, sneaking about, keeping on the move and trying to feed. Those parts are all pretty tense. Monster play involves some clever touches, like being able to leave a deliberate trail of footprints to a river and then sneaking out further downstream leaving no trace.

But I kept feeling as if the hunters needed something to do other than track the monster and occasionally kill other wildlife for buffs. Perhaps a side activity that could expose the hunters to some risk, encourage more early monster confrontations, but pay off with something that would aid them in a stage three fight. That’s some real backseat designing, of course; and for all I know other (as yet unknown) modes of play may very well provide exactly these opportunities. I hope so.

Something else I’d definitely want to see in the final release is some kind of offline, pressure-free tutorial area where players can practice without being in a real match. This would also take some of the burden off the poor old HUD, which at the moment gets absolutely rammed with tutorial information and indicators. It’s especially awkward when trying to target specific hunters while in the monster’s third-person view. You’ll hopefully be able to toggle some of this stuff later on, so criticism about about how messy it looks could be premature. 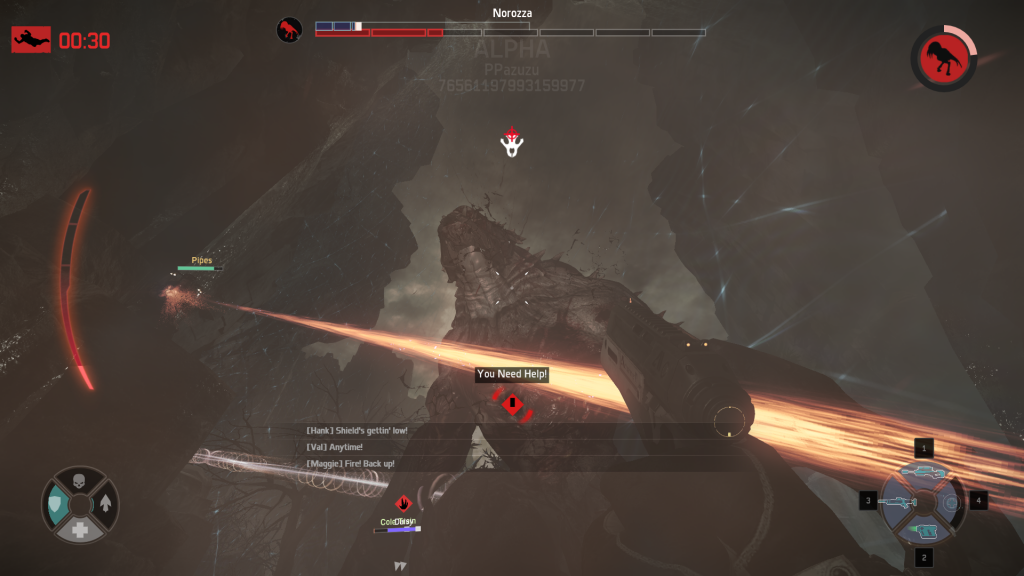 Sorry, but very little about this HUD looks in any way elegant.

It’s hard to make concrete statements about the impact of the levelling process at this point either, but I’m wary of time-sink-dependant upgrades in a title that already seems to be struggling to find competitive consistency. Performing tasks as your class (consistently healing people as the Medic, say) moves you towards ‘Character Mastery’ and some additional perks. Ultimately, it also unlocks new characters (or monsters) in each class.

Technically speaking, Evolve pushed my 2GB 7870 into dramatic frame-rate hiccups even at medium settings, and the overall load times were astronomical (I’m not kidding, I remember ZX Spectrum games going faster than this on occasion.) This build isn’t the finished article, but with only three months to go until release and with gaudy “look at how many meaningless E3 awards we won!” splash screens being shoved in the player’s face this is a little harder to brush off than usual. Plenty of server issues cropped up too, but that’s no surprise given that part of the point of this “Big Alpha” was stress testing.

Stress testing of all types, really, as it’ll have given people to chance to figure out whether they thrive or crumble when thrust into unfamiliar, pressured roles. 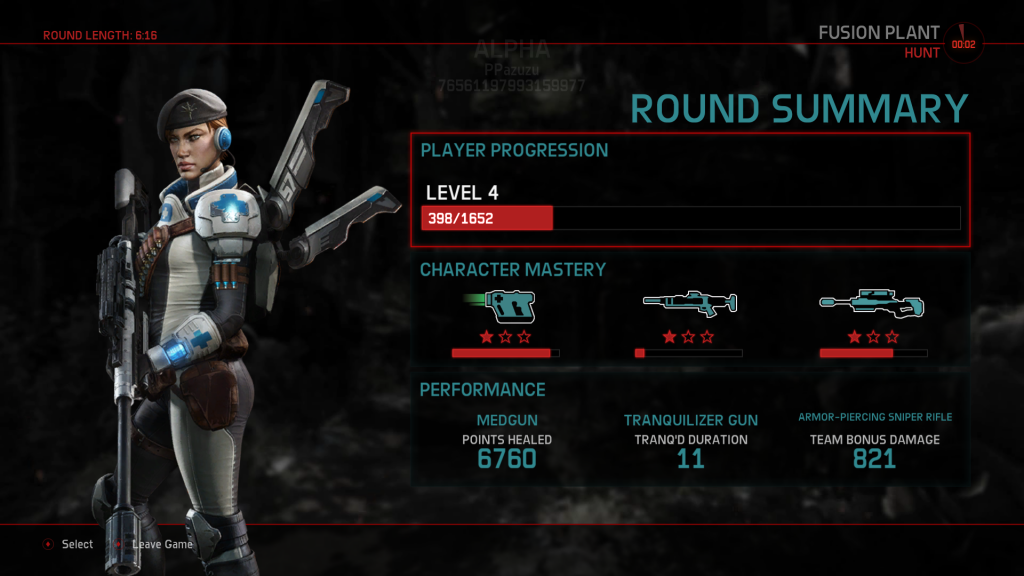 Some levelling up. Because every multiplayer game needs levelling, apparently.

For my part, playing as the Goliath monster (even though I wasn’t great at it) remained a tense, interesting affair across the weekend. Matches as a hunter were more variable, sometimes involving a fair bit of CryEngine sight-seeing and not a whole lot of monster action. Until the end that is, when the beast would pop out at stage three and destroy everyone. I generally stuck to the Medic role, which provides an unusual (but pretty successful) merging of the healer and sniper tasks.

Multiplayer titles morph dramatically with their player bases (just think about playing something like Left 4 Dead or Payday 2 in the early days, as opposed to now) and it’s impossible to say whether the nascent patterns emerging during the alpha will persist or be replaced by newer, more adept strategies. Based on my time with this build, Evolve has some novel ideas but also plenty to address before its forecast February release date. Right now, the $60 price tag is looking prohibitive.

Space Hulk: Ascension set to steal your genes next week