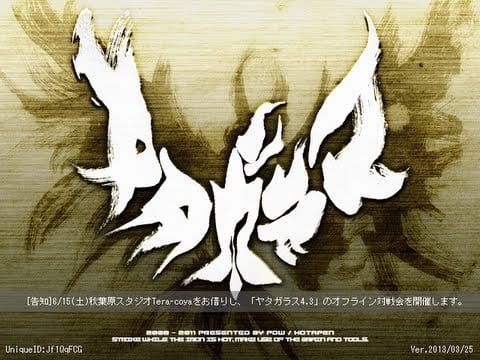 Up until recently, it’s been pretty rare for us to get fighting games on PC. The glorious One Must Fall 2097 aside, it’s even rarer for us to get exclusive fighting games, and rarer still for them to actually be any good. Despite this, three ex-SNK developers (King of Fighters, etc.) have taken it upon themselves to craft a fighting game on PC, for the PC market, with a “classic” visual style. Hooray for indies! Even if their company is called PDW: Hotapen, which I’m never going to remember tomorrow. Or in 20 minutes.

Yatagarasu: Attack on Cataclysm, which sounds like a ZX Spectrum shmup of some sort, is currently sitting at $57,606 USD on its Indiegogo campaign – a mere $10,394 short of its funding target of $68k. From what I can gather, this is an expanded version of a game that’s already out, promising to add at least two new characters, a full English localisation, English dynamic commentary (a commentator discussing the match in real-time, apparently), higher quality graphics, better online support, and more.

I admit that I’m curious enough about the dynamic commentary system that I’m tempted to back it myself, and the promise of a genuinely accessible fighting game appeals as there are precious few of those. On the other hand, this is a game by ex-SNK staff, so I’m taking that with a pinch of salt. Although I suppose “accessible” isn’t the same thing as “the last boss won’t make you snap your controller in half with rage.”

The campaign is using flexible funding, which means the devs will get the cash even if they don’t hit the goal. If this happens, “we will proceed with work on Yatagarasu Attack on Cataclysm and use the contributions we have received to fund as much as possible of the new features and improvements. We will make up for the shortfall in funding wherever possible by putting more time into development, but progress on the game will be much slower.”

In short, it’s coming one way or the other. If you’re up for a PC fighting game by experienced fighting game devs, go and have a gander at the Indiegogo page.

Trailer below, showing off some rather lovely animation and character designs.