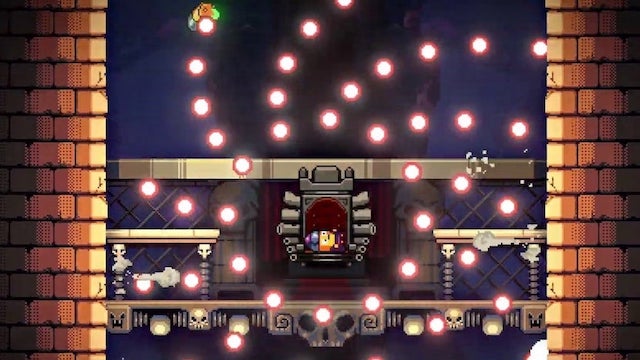 Fans of Dodge Roll Games have gotten their fill of the hit shooter Enter the Gungeon already. Unfortunately, their options are rather limited when it comes to playing its follow-up, Exit the Gungeon. Currently, it’s an Apple Arcade exclusive — but that’s about to change.

In a new message on its Twitter account, the company confirmed that Exit will make its way to PC “early this year.” It didn’t provide an exact release date, but more information is expected soon.

What is Exit the Gungeon all about?

The follow-up to Enter the Gungeon takes a different approach to the first. While the goal is still shooting enemies first and asking questions later, it’s more of a fast-paced shooter. It takes place in a side-scrolling format, with fast-moving levels that require quick dexterity and an even quicker trigger finger.

Using the dodge roll to get out of harm’s way while firing away, players must make their way through increasingly tough waves to survive. These include “shifting rooms, enemies, bosses, bizarre weapons and items” of all kinds. Think you can Exit the Gungeon? Maybe.

On top of that, the developer also confirmed that its original Enter the Gungeon has become a massive hit. The game has cleared over three million copies sold across all formats. Dodge Roll noted that “we’re so thankful for the community’s support” over the game. If you haven’t checked it out yet, you can purchase it on Steam for just $14.99 (well worth it, if you ask us). A Collector’s Edition is also available.

Exit the Gungeon has been a huge draw since its arrival on Apple Arcade last year. So, we have a feeling that when it releases on PC, it’ll be a hit with fans. Check out the trailer below if you want a good idea of what kind of chaos awaits.

Platinum Games partners with Tencent, but won’t lose its independence