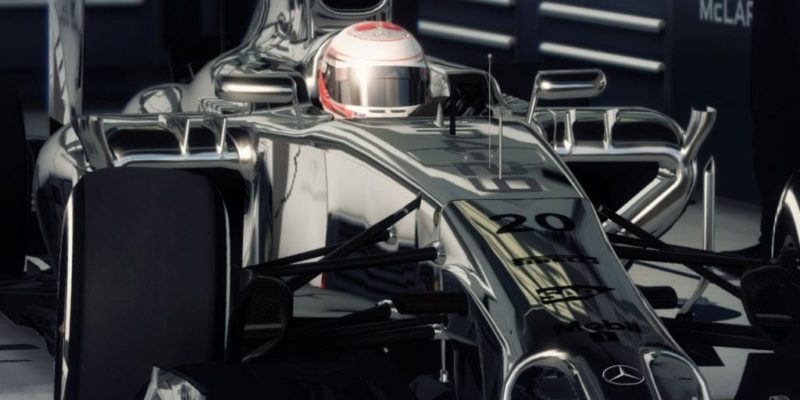 Phwrroar, look at the turbocharged power unit on that. Probably.

Codemasters has effectively announced a pair of F1 games today, with both F1 2014 and a 2015 game in the works. F1 2014 is coming on 17 October for the PC and old/present generation of consoles, while the 2015 game will be on PC and the present/’next gen’ consoles.

Can somebody let me know when the PS4 and Xbone have been out long enough to make ‘next gen’ just ‘now’? Thanks.

None of that really matters in PC world mind you, since our boxes are always as technologically advanced as the latest Formula One cars. Speaking of which, F1 2014 is being touted as incorporating “this season’s seismic rule changes,” which include aerodynamic regulations and turbocharged power units. TURBOCHARGED POWER UNITS, PEOPLE. I don’t really know what that is, but it sounds like a good time.

It’s going to be the “most accessible” F1 game yet as well, apparently. Codemasters has implemented some sort of magic system that’ll watch you race and try to tune the difficulty levels accordingly. It’s … it’s going to tell me I’m shit, isn’t it? Oh well.

Anyway, as you improve you’ll supposedly be able to nudge “incrementally higher levels.” And, naturally, if you’ve played all of these games before you can just start out on the highest difficulty possible with your racing wheel and your authentic F1 team jumpsuit or whatever.

The full circuit roster and team line-ups will be included, of course. So there’s the addition of the Russian Grand Prix at Sochi, the return of Spielberg and the Hockenheimring, plus a day-night Bahrain Grand Prix. Russia and Bahrain, eh? Formula One touring all the human rights hotspots, there.

No mention of any of the “classic Formula One” stuff from last year, so I don’t know if that’s still going to be there.

As for the 2015 edition, Codemasters plans to launch that “earlier in the Formula One season” and players will “receive digital updates for the game as the championship unfolds, enabling players to compete against the drivers and teams they watch week in and week out.” Sort of like EA does with FIFA, I’m guessing.