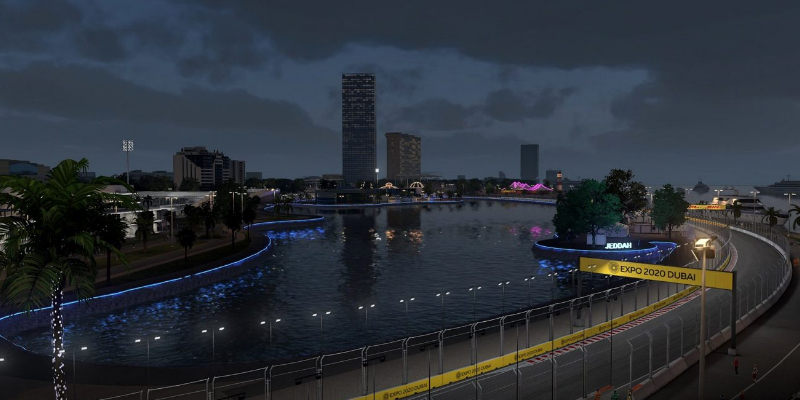 F1 2021 launched in July without three of the official calendar’s tracks. Developer Codemasters confirmed that it would add these tracks sometime post-release. We got Portimao in September and then later Imola, in October. Finally, the third and final circuit has arrived, with Jeddah being added to F1 2021.

Patch 1.13 introduces Jeddah, home of the Saudi Arabian Grand Prix. It is a fast circuit that offers a mix of the technical aspects typical of a street circuit, and the speed of an old-school Grand Prix track. Jeddah is the second-longest track on the Formula 1 calendar with a full lap coming in at just under four miles. The only circuit that’s longer is Belgium’s Circuit de Spa-Francorchamps.

Many of Formula 1’s Middle Eastern and Asian races are held at night and Jeddah is no different. This will be the fifth full night race on the F1 Calendar following Singapore, Bahrain, Sakhir, and Qatar. Although, in F1 2021 Jeddah can be raced both at night and in the day.

The introduction of Jeddah should provide some insight for Formula 1 fans. After all, this circuit has yet to host an F1 race with it debut set for December 5. The release of the circuit in F1 2021 will give Formula 1 fans the opportunity to see how Jeddah feels to race on before spectating the real thing.

As expected, Patch 1.13 also addresses a variety of bugs that were present in F1 2021. Most of these are stability improvements, or are fixes targeted at specific hardware. The biggest general fixes apply to multiplayer, as players kicked for timing out will no longer be banned from a session.

In addition, host-spectators will now correctly see the race start lights go out at the same time as racers. This change follows a large number of fixes in Patch 1.12 that looked to fix the game’s various de-sync issues in online lobbies.