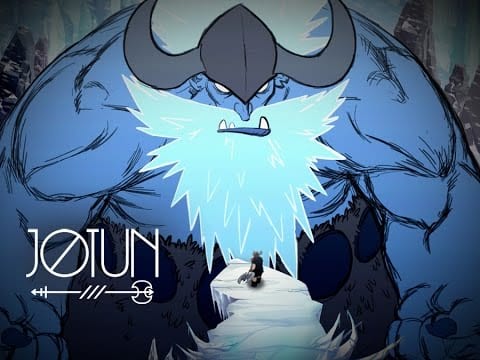 Viking and giants are the subject of Thunder Lotus Games’ title Jotun.

A Jotun is a giant from Norse mythology and they also feature in this new indie title which is currently being Kickstarted by William Dubé and his studio Thunder Lotus Games.

Inspired by classics such as The Legend of Zelda, Journey and Shadow of the Colossus, a Norse warrior called Thora is on a mission to prove herself to the Gods by facing Viking purgatory on her journey to enter Valhalla.

Promising a mix of exploration and combat, this is William’s “love letter to classic and honest gaming” which sounds like as good a reason as any to create a new indie game.

Randomly generated areas will fill the game world which is going to make it a little trickier to discover puzzles, shrines to the Gods, and the game’s many collectable items. The boss fights also look pretty interesting as the team have utilised a zoom out camera to increase the sense of scale. It also makes Thora look rather insignificant compared to her giant enemies. William says you can expect “fast-paced” action when these battles kick in.

There’s no doubt Jotun looks rather charming with it’s 2D hand-drawn art style and subject matter. The Kickstarter for Jotun is up and running with a target of $50K, and if you like what you see, there’s also a Greenlight page.

When will it be complete? The plan is to get the game finished for September 2015.

Over 20 million watch the DOTA 2 International 4

By Sam Robins6 mins ago
Hardware