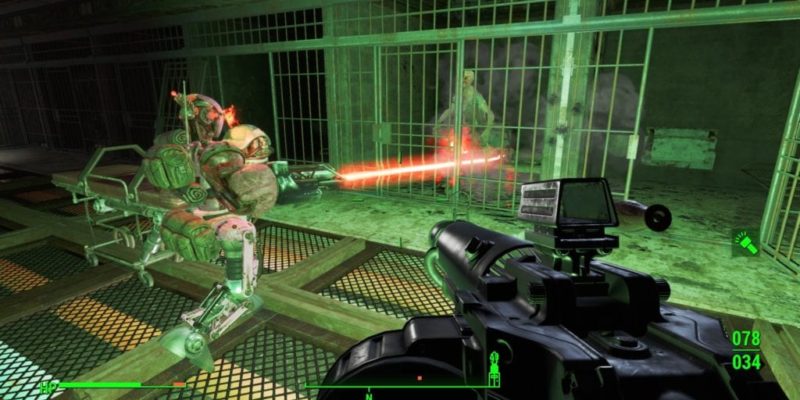 I’m truly thankful for two things about Fallout 4‘s Automatron DLC. Firstly, it’s given me an excuse to dive back into Fallout 4, which I’m really rather enjoying because I’ve been wanting to spend more time with it for awhile now. Secondly, it lets me build giant death robots, which is almost as good as being able to fire bees at people.

Automatron is part way between Fallout 3 and New Vegas‘ huge, story-driven DLC packages that added new areas and hours of gameplay; and the little bits of DLC that add a couple of new weapons. It’s definitely closer to the latter, but it’s a lot less pointless than that comparison would imply.

As is pretty much Fallout tradition, things kick off with you receiving a mysterious distress signal. Find the source and you find a very dead caravan; a lot of very angry murderous robots; and Ada, the sole survivor from the caravan – who is, herself, a robot.

The angry murderous robots are the work of the Mechanist, a mysterious individual whose robots are preaching a message of love and peace across the wasteland, and then murdering any humans they come into contact with. With the aid of Ada, you need to build your own robots, and hunt down and stop the Mechanist. 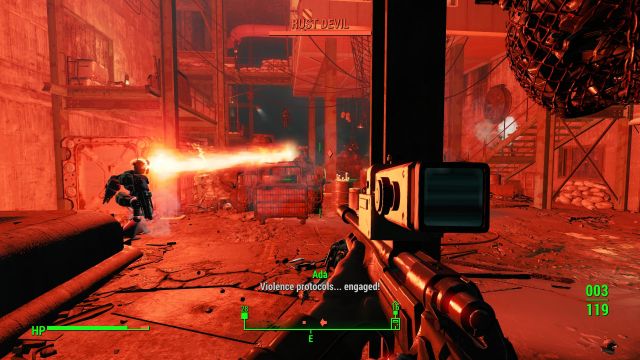 Through LOTS OF SHOOTING. And HEAD-MOUNTED DEATH LASERS.

Hunting down the Mechanist will not take long, nor was it particularly tricky for my pre-endgame level 30 character. Other than a bit of overworld wandering to hunt down robots for parts, there are pretty much two “dungeons” for you to trawl through, and… that’s about it. Each of those two dungeons has a fun little confrontation at the end and a few really good bits of environmental storytelling (as well as the requisite computer logs and whatnot), but neither is a particularly big draw to this bit of DLC, which you can likely finish in one sitting.

No, the draw to the DLC is making your own robotic companions and using them to clean up the wasteland, and this is actually pretty great.

Robots are built via the new Robot Workbench, and are customised in much the same way as you’d upgrade a weapon. You pick a slot you want to change – head, torso, left arm, right arm, etc. – and from there you can change the base piece that’s equipped in that slot, what armour it has, what weapon it has, and so on and so forth. 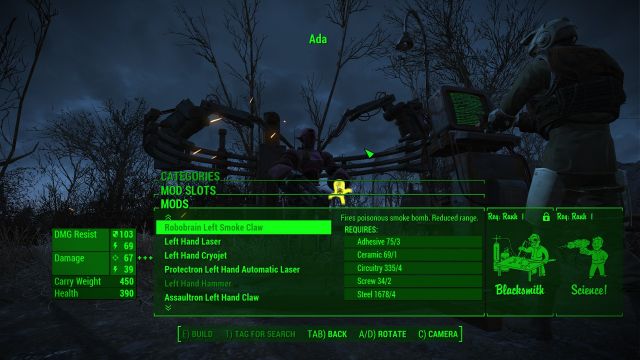 Seriously: many, many options, and quite a variety of ways you can customise the bots.

This actually allows for rather a lot of customisation. Do you want a nimble melee attacker? A guardian with lots of health and carry weight that boosts the damage resistance of its allies? A slow-moving brute with a pair of miniguns? A combination of the above? Up to you. Assuming you have the necessary adhesive, anyway, because this is Fallout 4 and glue is the most important thing in the world. You’ll also need pretty high-level skills in things like Robotics Expert and Blacksmith and so on to get access to some of the most impressive modifications.

Also, yes, you can use this to modify any of your other robotic companions. Tee hee.

That said, you only start off with a few types of part that can be built for each slot, with more gained by looting the enemy robots you destroy… although, uh, finishing the Mechanist quest nets you every single part. I’m actually mildly disappointed by this, if only because it would’ve given me a reason to track down more robots. 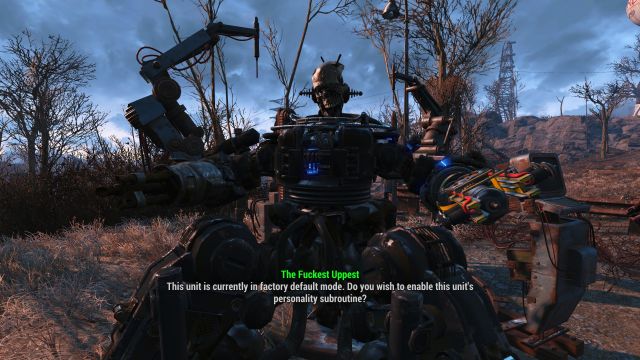 Obviously, if I can build a death robot, I’m building TFU.

And, barring adding in a robot-centred raider faction, the Mechanist’s own deathbots, and a few new bits of armour and weaponry, that’s largely it.

For the £7.99 price tag, that honestly doesn’t feel like an awful lot… but then again, what’s here actually adds a fair bit to the “base” Fallout 4 experience. It’s just not the sort of thing that’ll drag you back into the wasteland for an extended stay.

If you’re still playing Fallout 4, Automatron is a reasonably good pick up, as it adds quite a bit to Fallout 4 in general. On the other hand, if you’ve spent hundreds of hours in the Commonwealth and are looking for a reason to go back into Fallout 4, this isn’t really it. It adds a couple of hours of gameplay and some extra potential to your continuing adventures, but it’s not the sort of DLC that’ll keep you occupied by itself – which will make the price tag a little harder to swallow for any Fallout 4 devotees.

Deck of Ashes review – Burning through my cards