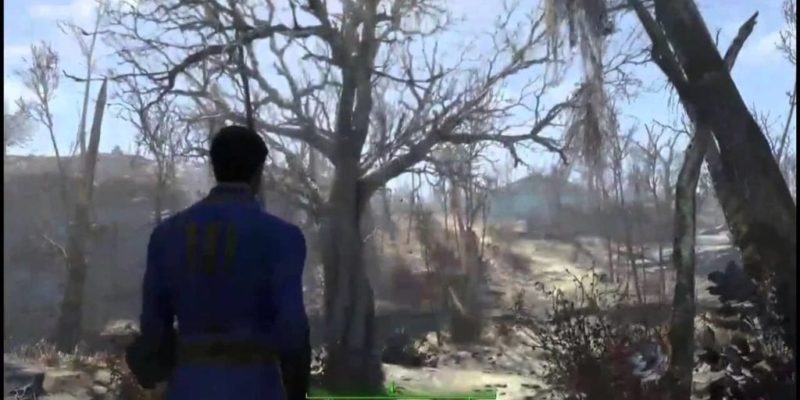 Bethesda’s E3 conference has come to a close with a huge wave of Fallout 4 trailers, gameplay footage, and information. I am now going to attempt to summarise this.

Before I get started, I’ll state that Fallout 4 clearly has its Charisma set to 10, because it managed to bypass my cynicism check and I’m actually quite impressed. I mean, I’m sure the writing will be a bit naff and the PC interface will be a catastrophe and it’ll be full of bugs, but everything that was actually on display looked really rather good.

Bethesda aren’t talking much about the story, but Fallout 4 begins before the nuclear apocalypse. You generate your character and your wife (or husband) through a face-sculpting system unashamedly nicked from The Sims 4, and enjoy day-to-day life in the pre-war era. Then it quickly becomes the war era, and you and your spouse and child flee to the nearby Vault 111. Through a mysterious series of events that Bethesda aren’t talking about, you emerge as the sole survivor of the Vault, 200 years later.

From there, you’re free to explore wherever you want, however you want. Chances are good that you’ll quickly come across Dogmeat (or whatever your canine companion will be named here), who can be controlled rather more effectively than companions in past Fallout games; you can give him contextual orders at the push of a button, telling him to stay or go or even fetch you items.

The world itself is set to be the biggest Bethesda have built yet, and it’ll “[culminate] in the massive ruins of downtown Boston”. There’s a new Pip-Boy, complete with holotapes to listen to or game tapes to play. There’s a layered armour system, so you don’t just have a single armour slot. Conversations are now a bit more cinematic; you can decide whether you want to view them in third-person or first-person, but your character actually talks and converses, and it looks like you select conversation options in a manner more akin to recent Dragon Age titles than past Fallout games. More “press a button to pick a two-word conversation option” than “read entire lines of dialogue and pick the one you want”.

What was slightly more impressive is the crafting system. Normally, talk of AMAZING CRAFTING SYSTEMS makes me sigh and reach for something to throw at whoever said it, but in this case… well, you can build your own settlements.

Essentially, every single item in the world can be broken down for parts, and those parts can be used to construct things. Like buildings. You can make your own house (by building individual wall pieces, stairs, etc.), decorate it, plant food and water to attract traders and build it up into a settlement, and set up power generators and defenses to fend off the inevitable raider assaults. There are multiple points in the world you can build up like this, and you can even set up brahmin caravans to trade between them.

This system can also be used to craft everything else. There are 50 base weapons in the game, with 700 modifications that let you heavily change them. For instance! Maybe you want to make a long scope. For that, you need Adhesive, Glass, Screws, and Steel, which you can assemble from items in the world. Duct tape for the adhesive, an alarm clock for the glass, handcuffs for the screws, and a toaster for the steel.

As for how the modifications work – well, you can take a basic Laser Pistol, and turn it into a laser rifle, and add a scope and a different magazine and a beam focuser. Or get a baseball bat and wrap barbed wire around it, or coat it in metal and attach saws to it.

This wouldn’t be an AAA title without a ludicrous collector’s edition, and in this case, it comes with a Pip-Boy. You can even slot your phone into it to act as the screen, and – yes – there’s a companion app that interacts with Fallout 4, and lets you essentially use your ridiculous Pip-Boy as the in-game Pip-Boy. Or you can just do that with your phone anyway, without having a makeshift Pip-Boy attached. Or you can just not use a bloody companion app.

Fallout 4 is using a “next generation” version of the Creation Engine, which is the same thing that powered Skyrim, which is… sort of like a heavily modified version of Gamebryo. It looks a lot better here, although people still look a bit weird and dead-eyed.

Finally: Fallout 4 actually has a release date. You’ll be able to leave Vault 111 and explore the wasteland on 10 November. You can see nine minutes of gameplay footage for yourself below.