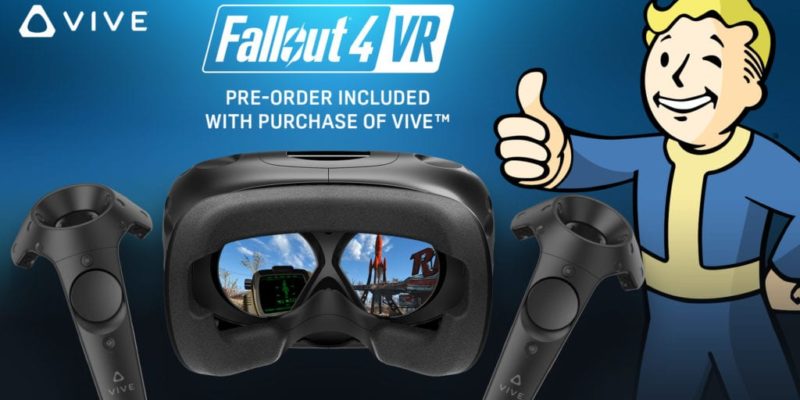 From today, HTC will be bundling Fallout 4 VR codes with every Vive headset purchase. The VR version of Bethesda’s title isn’t actually due for release until 12 December 2017, but you’ll be ready to receive a copy with that redeemable code.

Fallout 4 VR will make use of the Vive’s room-scale technology and the device’s “submillimeter tracking for responsiveness and accuracy”. Fancy stuff. A link to the $600 USD bundle with more information, and the chance to see whether your PC can actually handle VR, can be found here.

“Fallout 4 VR is the most anticipated title for VR this holiday … a full-length AAA open-world game that takes advantage of Vive’s incredible room-scale immersion for a mind-blowing experience in the Wasteland,” says Vive’s Joel Breton, clearly getting a bit over-excited. “We are now thrilled to provide this incredible game to new Vive owners and eagerly look forward to game’s launch on Vive this December,” he adds.

The situation with mods and the VR version is currently a little unclear. Things available through Bethesda’s own ‘Creation Club’ are likely to be compatible, and some Steam Workshop items appeared in the reveal trailer. However, scripting compatibility options for more complex third-party mods probably won’t be known until the game launches.

HAWKEN PC version being shut down