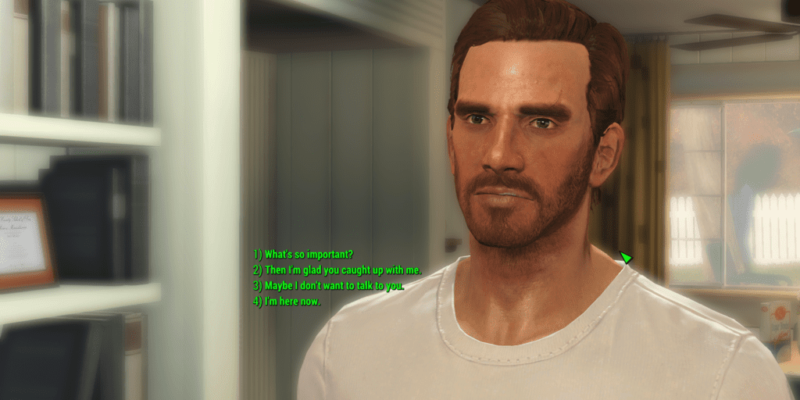 One of the advantages of not having played prior games in a franchise is that you can jump aboard the hype train for the next one in the series with no expectations. That’s exactly the situation I found myself in with Fallout 4.

Having to play and keep track of so many games as part of your job means you can’t get around to everything; and for some reason I just never ended up with a Fallout game over the past twenty or so years I’ve been involved with PC gaming. This time though, it was going to be different. I’d hop right on board the Fallout 4 express and follow the game as best I could without looking back at any previous Fallout games. Why? Because more often than not we can become too influenced by nostalgia.

After all the ‘2299’ hoax posts from 2013, it became apparent there was a tremendous public hunger for a new Fallout game. I’ll admit, that did pique my interest. As the months flew by I was writing bits and pieces about Fallout 4 in the news, but tried to get the other guys to cover as much of it as possible because both Peter and Tim know a lot more about the series. They had both either played a couple, if not all, the previous titles. 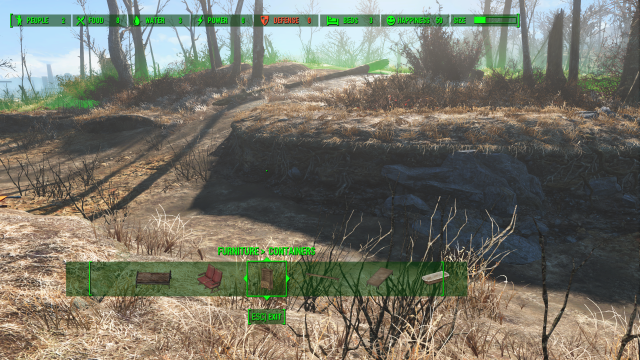 Building could not be more annoying.

For the past week both Elly and I, who are both Fallout virgins (aside from a very small amount of Fallout 3) have been getting stuck into the game. It became apparent after a few hours that all the build up has left us a little disappointed.

Within a few hours of concurrent (but physically separate) play, we were both sitting there thinking “so, is that it?”, “why does it look quite average?”, and “why is the interface so fucking appalling?” By and large, we were both thinking exactly the same things.

Regular readers will know I have a real beef about poor interface design in PC games. Remember Trion’s Defiance MMO? The UI on that was terrible, and Fallout 4 comes pretty close to topping it in the awfulness department. I have no idea which genius at Bethesda thought it would be acceptable to simply throw the console UI onto the PC version and think we’d be quite happy. But it left us with something that involves scrolling through ridiculous menus when trying to construct anything, and reading through blurry lists of text on the Pip-Boy.

The most basic functions to make this game enjoyable for long periods of play are just not there. Item compare, easy item selection, dropping, selective picking up. You get none of those. Dealing with the inventory is so rudimentary in Fallout 4, it’s laughable. Perhaps that’s acceptable if you use a controller (although it doesn’t exactly seem gamepad-friendly either), but it’s certainly not acceptable as a keyboard-and-mouse player on PC. 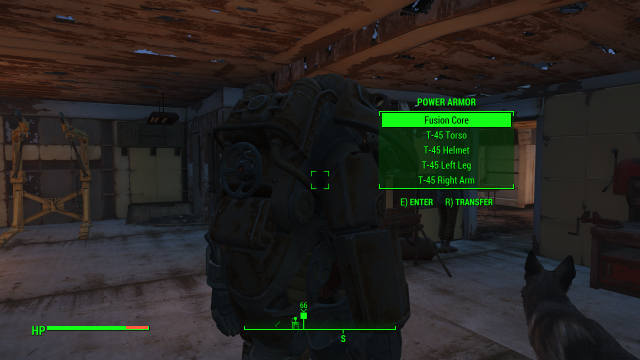 Not selecting the item you want.

Would it really have killed Bethesda to put a few guys on this for once? I know Skyrim suffered from similar problems and, sadly in this case for the PC players, that sold very well. Obviously Bethesda got the message that it was OK to short-change PC gamers in this area. Well Bethesda, it isn’t, but you seem to want to keep doing it.

This is the problem with franchises that sell extremely well across multiple platforms. You have developers like Bethesda who feel they can get away with one version to suit all because it sold ten trillion copies in 24 hours last time around. It may be sound business sense (short-term, at least), but how are we really going to progress the world of videogames without taking some risks or making the effort to cater to the strengths of specific platforms?

Just prior to launch there was the case of the leaked PC screenshots, which strangely appeared after there were posts around the Intertubes expressing concern that Fallout 4 didn’t look that great on PC. The shots that appeared did indeed look quite nice, though selectively so.

Having been playing the game on Ultra everything, ninja-bastard PC level, I can confirm that some of the textures actually look like a child’s smudged painting. Not quite what I was expecting from one of the supposed Games of the Year. Again, not really acceptable. 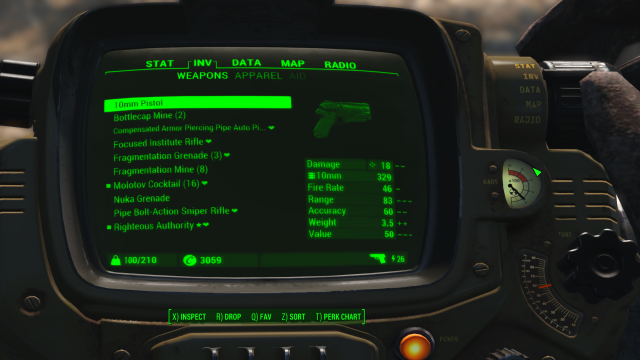 I can hear some PC gamers (and probably Bethesda) saying, “Don’t worry. Mods will fix it!” Excuse me? We now need mods to give a game basic usability, rather than to enhance an already solid game? Look at all the crap that needs to be done simply to rebind keys, change the FOV, have keys with two functions that can not be unbound, improve poor textures, and implement an inventory and workshop system designed more for a mouse than a controller. And that’s just naming a few things, I’m sure there are more.

Should modders need to fix this stuff? Features that, in my mind, are basic functions in a modern PC game? Of course not. That’s why we chuck down £30+ for a game. We expect the developers to have explored and experimented with the game design for the PC platform, and then packed up what should work best for the PC gamer in the release build. Not just assume that a console version without many extras will suffice, as seems to be the case for Fallout 4.

I‘ll admit I’ve enjoyed the story in Fallout 4 so far, and probably more so as somebody fresh to the series; but this game really does piss me off in other ways. It will probably receive Game of the Year, Decade, or whatever by the time 2015 closes out, but if we’re talking about the PC version it will in no way deserves it as far as I’m concerned. Not by a long shot. Watching Elly write out lists of weapons on pieces of paper just to be able to quickly compare what she had was the last straw.

I will now be waiting for modders to try and fix some of the glaring omissions from the PC version. It’s just a shame they won’t be seeing a justified share of the ’12 million copies sold in 48 hours’ sales profits. Well done Bethesda.

Witness another trailer for The Witness

By Steve Clist12 hours ago
Features

By Kurt Perry13 hours ago
Features

By Jamie Sharp4 days ago
Features

By Andrew Farrell7 days ago
Features