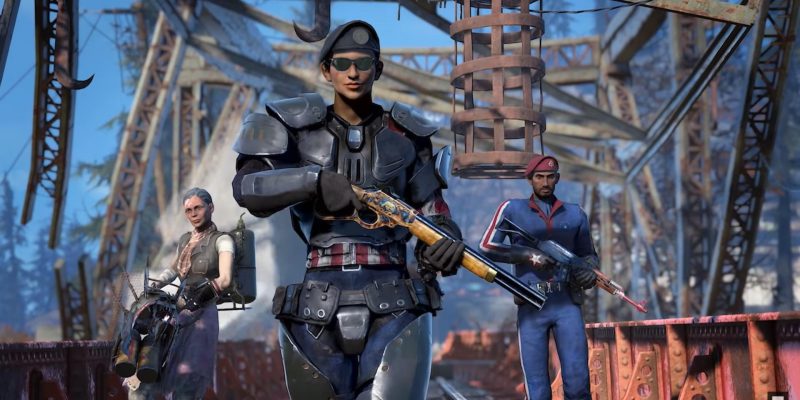 Fallout fans may still have divided opinions about the state of Fallout 76, but it certainly is respectable to see Bethesda continue to support the game well into 2021. The approach to developing content has changed with the introduction of seasons, but I would argue the seasonal approach is generally for the better as opposed to long droughts before major content drops. At any rate, the Locked & Loaded update goes live today for Fallout 76 , which features a new Scoreboard themed around Armor Ace.

If you’re familiar with previous seasons, you should know Armor Ace and the Power Patrol by now. These heroes have gone toe-to-toe with various factions in the past. Sure enough, they’re back again for Armor Ace in Cold Steel to fight Commissioner Chaos and the Yukon Five robots. You’ll take on the task of defeating them one-by-one as you progress through the new season pass. There’s a lot to go through this time, but here are some of the highlights.

Show off yourself and your crib

As always, there are new cosmetics and other in-game items aplenty in this new season. You’ll also be able to acquire a few reward items from previous seasons like Antique Speed Bag and Perfect Bubblegum, purchasable with Gold Bullion. Aside from looking good in person, you’ll also be able to add mannequins to your CAMPs to show off some of your favorite armor sets and styles. If that’s not enough, how about the option to build and maintain two CAMPs at once? There are a few caveats that do come with this feature though, so you will want to read up on how to enjoy your abode choices. The option to save CAMPs to slots is definitely a nice-to-have feature.

Locked & Loaded is quite literal

As the title suggests, the Fallout 76 Locked & Loaded update is now live with SPECIAL loadout options for you to customize your character to deal with threats out in the wasteland of Appalachia. You’ll also be able to use a Punch Card Machine to adjust things to your liking, change your Perk Card selections, and save your new custom setup into a slot. To access these machines, just place one in your CAMP or look for one around the wasteland. Vending Machines now have the same shared inventory across all CAMPs. The change should save you time and the hassle of reassigning them to build new CAMPS. All Vending Machine item slots share a single pool too, so you can sell the maximum number of items at once. Other items like Refrigerators and Fermenters also share their inventories across CAMPs. As with the loadouts, you’ll want to read up on the blog post if you want to learn all the details about how these systems work.

Business is good as usual

Daily Ops received another expansion, as Bethesda puts it. You’ll be able to try out a new mode called Decryption, discover some new enemies and Mutations, see some new sights, and get rewarded for it all.

The new Decryption mode is certainly meant to be a highlight. The way it works is that you’ll need to disable three Radio Interceptors for Vernon Dodge. Intercept special codes by taking down enemies and use them to disable the Radio Interceptors. You’ll have to work your way through increasingly difficult modes to takeout all three, before finally defeating a boss to mark things complete. As for the new enemies, you’ll encounter Scorched, Mothman Cultists, and Mole Miners. Find them in Daily Ops activities. If you jump into Decryption, you’ll also wrestle with the new Mutations like Savage Strike, Group Regeneration, Swift-Footed, and Toxic Blood. You can probably deduce what you’re up against.

We don’t know a whole lot about the new Daily Ops locations, but you’ll experience Vault 96, Watoga Raider Arena, and West Tek Research Center as randomized options in the location pool. And perhaps the less you know the better. Everyone likes a good adventure now and then.

And while I’d like to reward you for reading this far into the post, the least I can do is offer you an idea of what to expect from the Daily Ops. Bethesda mentioned there will be Covert Scout Armor, which has some stealth features. If weapons are more of your jam, you can look forward to the Unstoppable Monster and Medical Malpractice legendary weapons, plus some plans for new CAMP objects. The rest of the Fallout 76 Locked and Loaded update is bug fixes and gameplay improvements. While not as exciting as new content, being able to play said content is certainly more enjoyable when things work like they are supposed to. You can check out the long list of game updates and the additional details about new features in the full patch notes post.