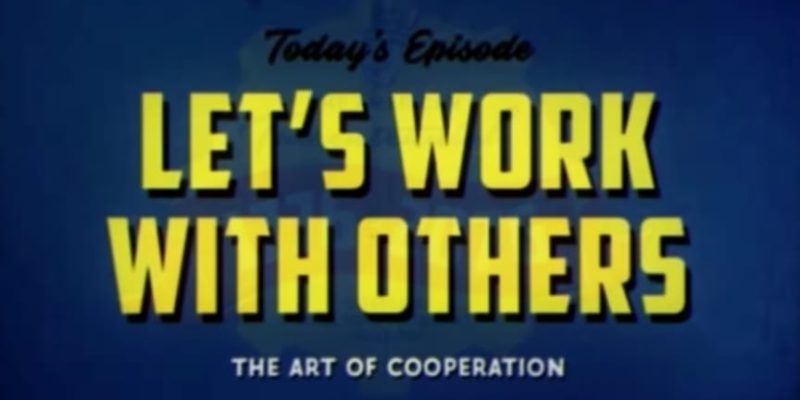 Maybe some day, Fallout 76. Some day.

Bethesda Softworks recently released a trailer for Fallout 76 titled “Let’s Work With Others.” The  Vault-Tec infomercial cites the “Art of Cooperation,” or, working with other people to achieve your goals. And of course, in typical Fallout fashion, over-the-top cartoon violence ensues.

For starters, Vault Boy happily meets new Vault Dwellers in the trailer only to see one of them die to an Assaultron. Next thing you know, he replaces old friends with new ones, taking out super mutants and aliens. The infomercial caps off with a team of four facing off against another team. Then, we’d see people getting smashed by bats and getting their ears drilled. Yikes!

Given that Fallout 76 is an online, multiplayer experience, cooperating with other players is a key factor in achieving success. As we’ve come to learn at QuakeCon, multiplayer can turn out to be a harrowing experience because of griefers. Because certain players in online games would be out to ruin the fun for everyone, Fallout 76 would have bounties placed on these wanted criminals.

Naturally, if you’re with a team, you can increase your chances of survival whether against griefers or other hostile inhabitants of post-apocalyptic America. Still, as seen in the video, you might also want to avoid getting attached to people. Vault Boy himself ended up looting his own friends’ corpses for items. Lastly, as with many online multiplayer games nowadays, looks like Bethesda will be having emotes and poses. At least, that’s what it looks like at first glance with the Vault Dwellers practicing their intrapersonal interactions.

Fallout 76 is still a ways off, releasing on November 14. As usual, PC Invasion will keep you updated with more news. We’re definitely looking to team up and cooperate to survive the wasteland. Oh, and of course, let’s work with others — but still, keep your friends close, and your enemies closer.