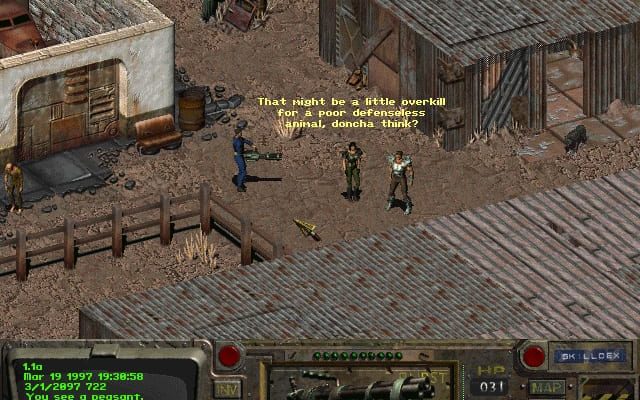 The Fallout game that started the series, Fallout: A Post Nuclear Role Playing Game, is free on Steam until the end of the month. If you opt to grab it between now and 11.59pm (Pacific US Time) on 30 September, it’ll be on your Steam account forever.

To do that, head over to the store page (within Steam itself, ideally) and hit the Install button. Fallout was developed and produced by Interplay back in 1997, and its team includes a host of names that should be familiar to PC RPG enthusiasts. Feargus Urquhart and Tim Cain (now both at Obsidian, where Urquhart is CEO), along with Brian Fargo (of inXile and Wasteland 2 fame) were all involved.

It’s a very different title to the games that followed Fallout 3, of course. That title took the series in a whole other direction.

The first Fallout has turn-based combat, and uses a classic isometric camera. It also introduced the familiar SPECIAL system of character stats. Your choices and skills matter a great deal, whether you intent to fight, sneak, or dialogue-option your way out of various post-apocalyptic encounters. Expect a challenge, basically.

But don’t let that put you off, either. It’s regularly cited as a classic RPG for a reason.