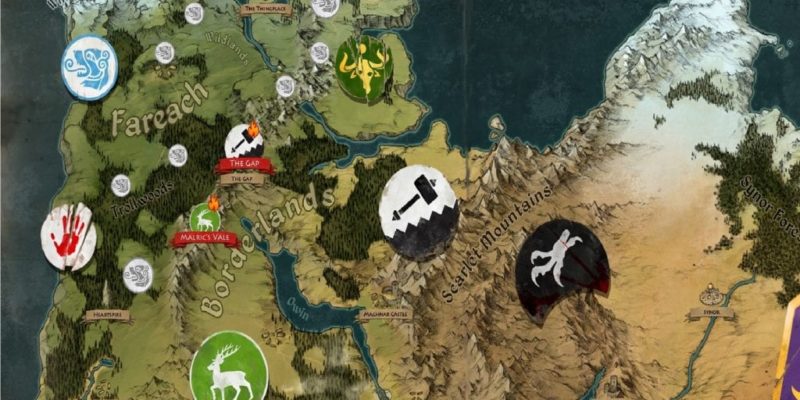 Fantasy General 2‘s single-player campaign will have you playing as Falirson and his merry band of warriors from the Barbarian faction. It’s fairly lengthy with over 30 missions or scenarios, with gigantic maps that can take almost an hour to complete. In this Fantasy General 2 guide, we’ll take a look at the gameplay basics and we’ll share some tips on how you can progress smoothly throughout the campaign. Don’t forget that you can also tweak the game’s difficulty even while you’re on the world map.

1. Getting all that gold

Fantasy General 2‘s mechanics work differently compared to what you may have gotten used to in certain roleplaying or strategy games. For starters, finishing missions will net you gold — but that depends on how fast you were able to complete it. There’s a counter on the upper right-hand corner that tells you how much wealth the region has. It dwindles each turn to represent villagers leaving in droves or any raiding that goes on.

The wealth that remains once you finish a mission would be multiplied by 25. If you finish with four turns remaining, you’d get 100 gold. If you dawdle around too much and you finish with only one turn left, you’d get 25 gold. And, yes, it’s also possible to get zero bonus gold at the end of each mission. 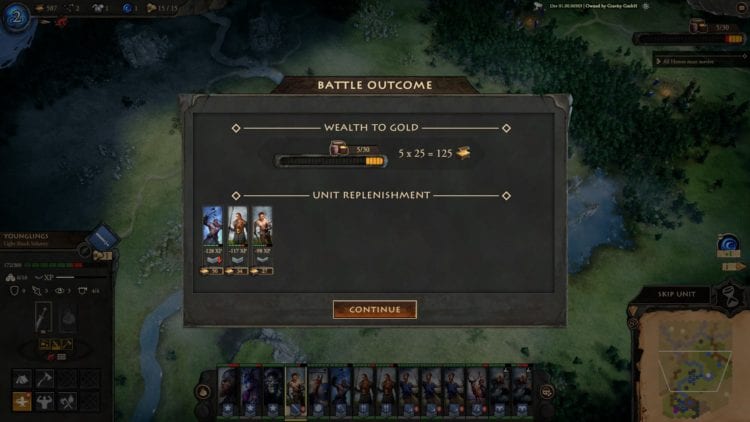 You can offset this by exploring out and about. Fantasy General 2‘s maps are quite large, and certain locales have numerous points of interests such as:

Do remember that some of these points of interest can lead you off the beaten path. You might find yourself wasting turns to grab a settlement or a ruin. 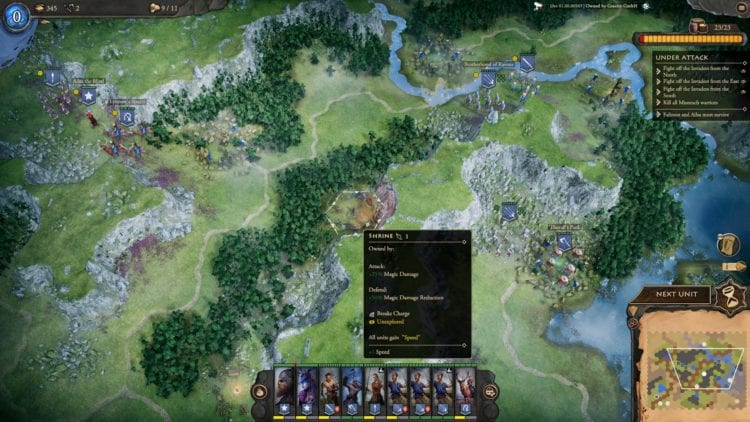 You’ve got the usual assortment of unit types — melee, ranged, cavalry, flying, and monstrous infantry. Obviously, melee units can only attack an opposing unit that’s right next to them. Ranged units can take out those from two hexes away. Barbarian skirmisher units even have a “Defensive Fire” passive that allows them to shoot down enemies that attack a friendly unit that’s adjacent to them.

As for cavalry units, they come in two flavors: shock cav and missile cav. Shock cavalry can inflict massive damage when flanking but they’re weak on the defensive. Missile cavalry can strike an opponent and then dash back to their previous hex in the same attack. Flying units (crows, vampire bats, pegasi, harpies) can only be hit with ranged attacks or some magic spells, but they’d also take damage if they attack a melee opponent. Lastly, your monstrous infantry (trolls) can be shock infantry or siege units (they’d hurl large boulders at enemies).

Most attacks are physical in nature and armor will mitigate some of the damage, though you also have magic attacks. Magic ignores all armor and will deplete morale significantly as well.

4. Know the lay of the land

Fantasy General 2‘s battle maps tend to have a lot of forest hexes so use them to your advantage. Units can remain hidden if they stay in forests and aren’t spotted by the enemy. You can also hold down the ALT key to place waypoints so you can better control your unit’s pathing. Hidden units that have the “Ambush” trait can deal massive damage while stopping an enemy in its tracks.

The game also doesn’t use the traditional “rock, papers, scissors” concept and combat can be deemed more realistic. For instance, certain units will have “charge-type” attacks that can wreak havoc on your lines. But, if they end up attacking your spear units (some can even place their own fortification), their charge would get painfully halted.

Speaking of fortifications, there are a number that you’d spot on the map such as the aforementioned settlements and castles. The “rough” terrain type also adds a bonus when your unit is on top of one. There are also hexes with towers and placing a ranged unit therein boosts their ranged damage.

There are a number of spells that you can use in Fantasy General 2. However, these will require a certain amount of mana to cast. Remember the aforementioned mana pools that you can find on maps? Capturing them/moving a unit on that hex will give you control of the mana pool which will add a point each turn.

Because it can take a while to get the ball rolling, you’re going to need the hero skill “Rune-Bound” which provides +6 mana at the start of a battle. This is only available for three of your heroes so you’re looking at 18 mana at the beginning.

Other hero skills, unit passives, artifacts, and effects also affect morale. For instance, if a unit dies or several units take massive damage, it has the potential to demoralize other nearby units. This will lower the damage that they deal. They can also become broken and, eventually, routed. Some missions will require you to kill certain enemies, so you’d have to chase them down in case they flee. 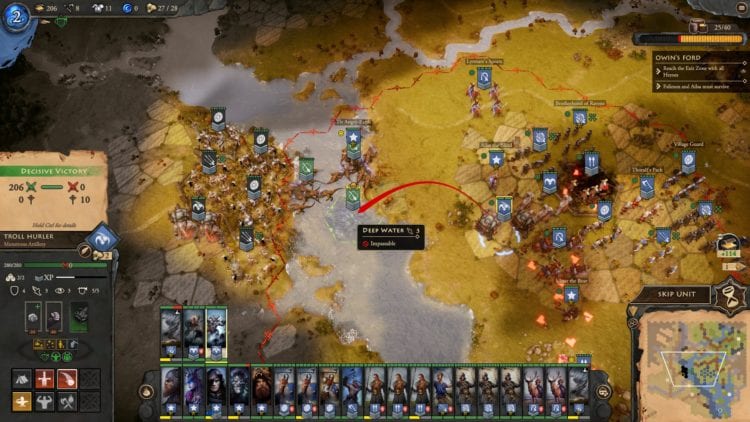 As mentioned in our official review, you’ll want to take note of “wounds” and “kills.” Wounds (red part of a unit’s health bar) are the damage temporarily taken by unit squads or heroes, and these can be healed to full when resting for a turn. Resting also requires that you don’t move or commit any other action for that turn, and you also can’t be attacked.

Kills are different in that they represent a trooper dying in a particular squad. The number of squad members remaining is represented by tiny pips in the health bar. Resting won’t restore your dead troopers, and all troopers getting killed in a squad would lead to that unit getting wiped out (but you do gain mana if a unit dies). Dead troopers replenished at the end of a battle but they’d lose experience points due to new recruits (aka. leveling down). Your only choice, if you wish to avoid this, is to use certain special potions or to replenish them in a castle or war camp by spending gold.

Ideally, you’d want to beef up your hero-type units so they can tank a lot of damage. Since heroes are lone fighters and aren’t comprised of a squad of troops, they don’t take kills, only wounds. A general principle is to push them to the front of your line to soak damage or attack. Then, once their health bar’s below half, move them to the back of your line and rest for a turn to heal them to full.

Early on in Fantasy General 2, you can only recruit the baseline unit types such as Younglings, Maidens, and Troll Pups. Recruitment would cost gold and each units needs available supply points so they can be fielded. As you progress further during the campaign, you can recruit slightly higher-tier units that cost a bit higher. Each unit also has a supply requirement (with troll units taking up the most space). You can increase your supply limit via some of Falirson’s perks.

Naturally, you’ll also want to upgrade your low-tier units. Most of these upgrades require not just gold but other materials such as weapons, armor, and liquid mana (for magic units). You’ll find these materials as rewards either when exploring a point of interest, razing a settlement, or at the end of a battle. Liquid mana tends to be fairly rare though even until the late-game experience.

As noted in the official review, rewards from points of interest can be randomized. If you ended up getting gold or some unwanted accessory, you can reload your save. Maybe you’d end up getting materials instead. We also have a guide for the best units in your Fantasy General 2 campaign if you want to take a look at what you need to prioritize. 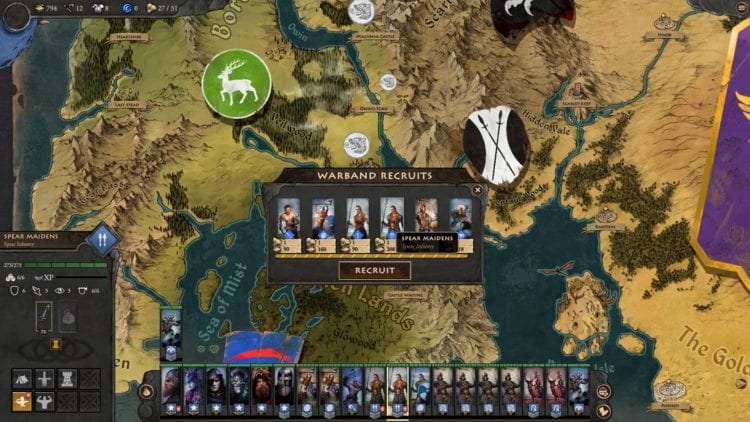 Fantasy General 2: Guides and features hub – Everything you need to know