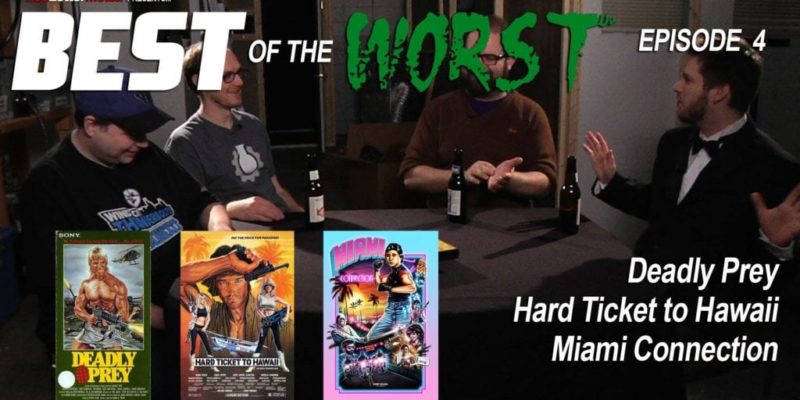 In order to understand Far Cry 3: Blood Dragon you need to know that its creators went out of their way to license a song from the film Miami Connection, a production self-described as follows:

The year is 1987. Motorcycle ninjas tighten their grip on Florida’s narcotics trade, viciously annihilating anyone who dares move in on their turf. Multi-national martial arts rock band Dragon Sound have had enough, and embark on a roundhouse wreck-wave of crime-crushing justice.

Keep that summary in mind, as you partake in this quick quiz to accurately determine your level of interest in Far Cry 3: Blood Dragon.

Does Miami Connection sound: (a) Incredible. (b) Like it’s trying a bit too hard. (c) Worse than leg warmers, I hate the 1980s!

Are you bored with Far Cry 3? (a) Nope, I either haven’t played it or I have and want more. (b) What’s a Far Cry 3? (c) Yes, I never want to liberate another garrison, collect another thing, or hunt animals ever again.

If the spirit of Miami Connection could somehow be fused with the gameplay mechanics of Far Cry 3, would that be: (a) Orgasmic. (b) Confusing. (c) Literally the most terrible combination of two things since Adolf Hitler and the Chancellorship of Germany.

If you answered mostly A’s, congratulations Blood Dragon may well be your dream game. If mostly B’s, you should probably keep reading this review to learn more. If mostly C’s, buying this will make you hate the world and yourself. On the off chance that you answered with one of each: I’m sorry, but science is unable to determine your level of interest at this time.

Ubisoft’s not-actually-an-April-Fools-joke-after-all project is peppered with references to 1980s action films like Robocop, Predator, Aliens and Escape from New York, but isn’t exactly trying to be any of those. Blood Dragon’s focus is on nabbing the parts it likes (Robocop’s pistol sound, a helicopter turret sequence set to “Long Tall Sally,” frying critter eggs with a flamethrower, a lone hero imprisoned in a hostile space) and mashing them up with SNES style letterbox cut-scenes, aspects of a fictional Saturday morning cartoon designed to push action figures (albeit one with swearing) and a bit of meta-commentary on videogames.

That’s why its loose association with Miami Connection makes so much sense. Blood Dragon isn’t aping the blockbuster releases of the late 80s and early 90s, its aping the straight-to-VHS films that themselves were aping those movie blockbusters. Miami Connection chucked together ninjas, drugs, Florida, neon fonts, martial arts and the curious bond of enduring friendship between members of a cheesy rock band in an effort to cover as many topical action themes as possible. Blood Dragon is doing much the same thing, except with cyborgs, lasers, nuclear war, the threat of Communism and laughable patriotic chest-thumping.

But Blood Dragon is also a videogame, so it can jam all of those things into the structure and gameplay mechanics of Far Cry 3.

Something worth noting here; Blood Dragon is a standalone game, so you don’t need the original Far Cry 3 (or much familiarity with it, really) to play. It’s effectively a full conversion mod, done by professional developers and given a commercial release.

After a guided intro and the world’s most passive-aggressive tutorial the title tosses you into a smaller version of one of FC3‘s islands, draped here in the black-and-neon hues of Tron. You’ve got thirteen garrisons to liberate from squads of motorcycle helmet clad cyber-soldiers who burble out cries of alarm (“what the hell?”) in robo-monotone. You’ve got side-quests to rescue hapless science folks and hunt down dangerous predators like cyber-sharks. And then you’ve got Sergeant Rex Power Colt, an ice-cool cyber-commando (voiced by Micheal Biehn) prone to flipping off his enemies and spitting out one-liners dryer than a Temperance brewery.

There’s no longer any crafting (oh boo hoo,) but Ubisoft has instead added the titular Blood Dragons. These gigantic lizards are fast, vicious and … fire laser beams from their eyes. Luckily, they also have similar ocular problems to the T-Rex and can be coaxed to various locations by tossing cyber-hearts for them to nibble on (you get said hearts by ripping them out of fallen cyber-soldiers while making terrible/beautiful ‘heartbreaker’ puns, obviously.)

Can Rex and super-sexy super-scientist Dr. Elizabeth Veronica Darling defeat the dastardly Colonel Ike Sloan? Well, yes, they absolutely can. If you’re willing to dedicate three hours or so to the seven story missions Blood Dragon has to offer. During the course of those levels you’ll be punching reactors, foiling horrific genetic experiments and doing things so incredible that they really shouldn’t be spoiled. The game’s magnificent final sequence has to be experienced cold for maximum impact.

Of course three hours is just the run-time if you have a cyber-eye focus on rushing to the end as fast as possible. It’s far more likely that in between story missions you’ll mix things up by pursuing side-quests and collecting trinkets to unlock nifty weapon upgrades in the garrison-based stores. After all, what true cyber-commando goes into battle without a quad-barreled shotgun? The credits were rolling for me after about six hours, but only half the garrisons on the map were liberated and plenty of activities remained. If you have some sort of compulsion to collect everything, around ten hours is a decent guess.

At its best, Blood Dragon is both earnest and hilarious. While there are a few knowing winks to the audience, both good (sly digs at the original Far Cry 3) and bad (honey badgers? let old internet memes die already,) these are mostly found in the text descriptions of items in your data console (that’s future-speak for a clunky to navigate videogame UI.) The narrative is played almost entirely straight-faced, with heartfelt dialogue, overwrought emotions and melodramatic exposition galore. Biehn has clearly been itching for a chance to make amends for Aliens: Colonial Marines, because here he strikes the perfect balance between gravel gruff cyber-merc, betrayed soldier and bemused John McClane-style everyman stuck in the wrong cyber-place at a worse cyber-time.

Blood Dragon’s only unforgiveable mistake is including an ‘off’ option for Power Glove’s remarkable score, and it was an error of similar grievousness not to allow players (in my review copy at least) to turn it up higher in the volume mix. There’s also an unwelcome return of Far Cry 3‘s strange compulsion to remind PRESS KEYBOARD LETTERS TO TYPE players USE YOUR COMPUTER TO WRITE THIS REVIEW of basic YOU’VE OVERDONE THIS JOKE NOW control functions every time you come across a situation where they’re needed. That could do with a patch, and it’d be nice if the ever-present television scan-lines were optional too.

Oddly, given the medium, Blood Dragon’s flatter moments of comedy come when it’s mocking videogames. Here, the game tends to fall victim to the old trap of pointing out something that kind of sucks, but doing it anyway. Yes, segments of missions where you have to wait for an elevator to slowly arrive while you defend yourself are rubbish. Telling me that doesn’t really lessen the rubbishness. Likewise, Rex Colt is right to point out that hunting down three different types of collectible crap is a waste of his time. Any laughter at those lines is forced out by the uncomfortable spasm of truth.

But what could’ve so easily turned out to be disastrous piece of self-indulgent trash, replete with dumb “hey, remember the 80s, they were so 80s!!” referential humour, succeeds in paying worthy tribute to its subject matter. It’s trash alright; sublime, entertaining trash that lifts the desert chrome absurdity of VHS action movies and dumps it all over a compact version of Far Cry 3‘s open world and open choice combat. Blood Dragon is a better written, cheaper (in every sense) and funnier version of the original game. Only one man can look deep inside themselves, find the courage to do what’s right and purchase Far Cry 3: Blood Dragon to avenge their fallen brothers.

That man is you.

Unless you’re a woman. Then, that woman is you … too.

Look, what I’m saying is you should probably get this.