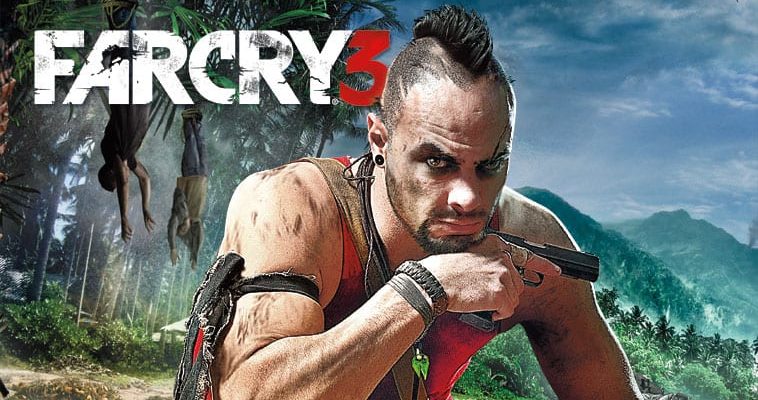 The premise of Far Cry 3 is not all that dissimilar to a teen horror movie; a high-adventure vacation in a tropical paradise goes horribly wrong when the group of sexy gals and guys are kidnapped for ransom by a bloodthirsty gang of land-lubbering pirates. Long story short, you find yourself alone and having to rescue those of your group that might still be alive.

And thus the open world walkabout that is Far Cry 3 begins.

As a holiday maker, you’re hardly the type who knows about guns and death… that’s where your friendly neighbourhood mentor figure comes into play. His name is Dennis. Dennis is your all round nice guy, so nice that it raises suspicions as to his true intentions. Whatever his overall plan, Dennis is the head of a small village that has been fighting the same bandits that kidnapped you and he’s eager as can be to help you rescue your friends and kill a few bad guys along the way.

Dennis is some teacher, in about 30 minutes he manages to give you abilities and confidence to hold a gun, shoot a gun and take lives. Bearing in mind that you’ve never shot at a person before, and were skydiving with friends the day before, that’s some educational skill. Our kids could learn a lot from his methods.

Our new friend is also the portal through which we learn other essential elements of the game. For example, to create medicine and status effect items you need to collect plants of various types that are dotted around the game’s (literally) enormous map. In addition, hunting animals provides you with valuable leather that can be fashioned into a trendy pouch to allow you to carry more items. Again, Dennis is some teacher… skin an animal and make a bag out of it, surely that would take at least a week to learn?

It’s all up to you as far as indulging in the collecting/crafting is concerned, it does take quite a bit of time (wild boars are not easy to kill as it turns out) but it does makes things easier. What is more essential is the activating of the radio towers dotted around the island, doing so reveals the area on your map and pinpoints the location of hunting grounds, key locations and fast travel points. Climbing the towers takes the formula of an Assassin’s Creed leap of faith moment, in that the climb is a mildly challenging puzzle as you try to work out how to navigate the dilapidated steel and broken ladders and is followed by a triumphant glide to the ground in double quick time (courtesy of a zip wire).

Once you’ve got the radio towers up and running it’s much easier to use vehicles as a means of transportation. Trying to do so without knowing which roads lead where is nearly impossible thanks to their unpredictable and seemingly random design. My kingdom for an American grid system.

Clearly, like Far Cry 2, exploration and ‘playing it your way’ are key themes for Far Cry 3 and ones that a lot of work has gone into. Whether or not the same level of quality will be present here as was on offer in the last remains to be seen. On the one hand, all of the elements are here to keep you coming back for more, but on the other the world itself isn’t as impressive and inviting as it was previously. The jungle mountains punctuated by small bodies of water doesn’t get the excitement and awe flowing in the same way as the expansive Africa plains did, but then again, we haven’t explored the whole map yet. Not by a long shot.

The build we played featured two, proper (i.e. non-tutorial) missions, one in which you have to infiltrate a wrecked ship being used as a bandit base and another that sees you searching for a special mushroom that can heal a friend of her disease. They couldn’t be more different from one another, demonstrating a great deal of promise when it comes to mission diversity in the full game.

Said wrecked ship mission can be tackled either through stealth or force, the former being the more rewarding option. Your task is to eliminate specific enemies (highlighted by their unique uniforms) and steal the data they’re carrying, once you’ve done that you need to get out of there. As part of your default kit you’re carrying a rather fancy digital SLR camera which, presumably through magic, you’re able to use to tag enemies with a floating skull above their heads which means you can see them through solid objects such as rocks, metal and wood.

Tagging enemies and then sneaking around behind them is the best way to silently take them out. Alternatively, if you want to shoot them dead, wait until one of the other bandits is using their welding tools to fix the boat – the noise masks the gun shot. If you happen to make a mistake and are spotted, you might as well give in and reload from your last save point. This is not a game you can realistically expect to win battles in when you’re heavily outnumbered.

On the other side of the mission coin, the mushroom collecting mission resembles something out of Requiem for a Dream. After unwittingly walking through a cloud of mushroom spores, you become intoxicated and the world begins to take on a whole new form around you. Caves shift and change colour and shape in front of your eyes, buildings jump away from you as you approach them, huge rocks lift slowly and elegantly into the air as though light as a feather.

It’s a welcome change of pace from the collecting and fighting portions of the game that have been shown up until now and hopefully point to missions that aim to enhance character, setting and emotion rather than just your shooting accuracy.

Once you do find the mushrooms, the doctor you’re bringing them back to is no less weird… but you can find out why for yourself.

Taken in isolation, the opening few hours of Far Cry 3 are frustrating, but that’s only because you’ve not had a chance to properly explore all the effects you can wring out of the tools and abilities you’ve been shown.

Clearly, there’s a lot to do here. The mission, then, is to allow players to express themselves and come up with genius ways to employ the wealth of mechanics on offer. If only because the single player portions of the other first-person shooters coming out before Christmas are almost certainly going to bore, here’s hoping Far Cry 3 succeeds in that mission.

OnLive’s assets were sold off for $4.8 million USD

By Martynas Klimas24 hours ago
Previews