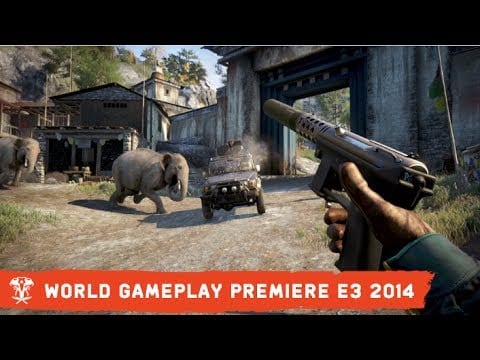 The wonderful world of Himalayan Kyrat can be explored with a friend, as Far Cry 4 will be incorporating co-op play to the game. This was revealed during Sony’s E3 press event, along with a seven or eight minute slice of gameplay footage.

In the video below, you get to see the very same gameplay but with added narration by Alex Hutchinson (creative director) and Mark Thompson (narrative director.) They’ll talk all over a bit of grappling hook exploration, followed by destruction of a convoy of vehicles (complete with Just Cause-esque mid-drive vehicular theft) and then an assault on an enemy outpost.

In this latter section, the main character is joined by a co-op friend in a silly gyro-copter thing and also enlists the help of a nearby elephant (not a co-op player, sadly) to go charge at some guards. Destruction ensues.

So yes, Far Cry 4. More co-op than before (described as “a massive part” of the new game.) And more elephants. Plus the Himalayan mountains. It’s coming to the PC in November.

Grim Fandango remake announced, but not for PC … yet